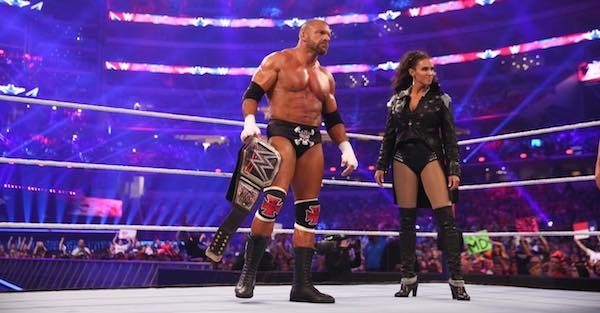 WWE has continued teasing adding Ronda Rousey to its stockpile of talented women’s wrestlers, and that only continued when TMZ caught up with Stephanie McMahon recently.

McMahon said directly to the camera that the “offer still stands,” and the WWE would love to have her.

When asked if a matchup between the two is still possible, she said “anything is possible.”

The last time Rousey stepped in a ring, she made quick work of Triple H and McMahon:

In the video, the group is confronted by WWE “Four Horsewomen” members Bayley, Becky Lynch and Charlotte Flair.

Rousey throws down her bag and tells the group to “name the time and place,” before they retreat.

Last month, footage from the event’s taping showed Rousey, Duke and Shafir sitting in the front row interacting with Bayley, Flair and Lynch after Baszler’s victory, which created speculation that the two groups would eventually work an angle together.

“It’s just a matter of time before Ronda Rousey officially signs with Vince McMahon — so says WWElegend, Jim Ross, who says it’s a “match made in heaven,” Ross said. “Oh, she’s gonna be a big star,” the WWE Hall of Famer told us at LAX … “It’s inevitable. I see her in a WrestleMania someday. It’s too great an opportunity for her to pass up and WWE to pass up … it’s a match made in heaven.”