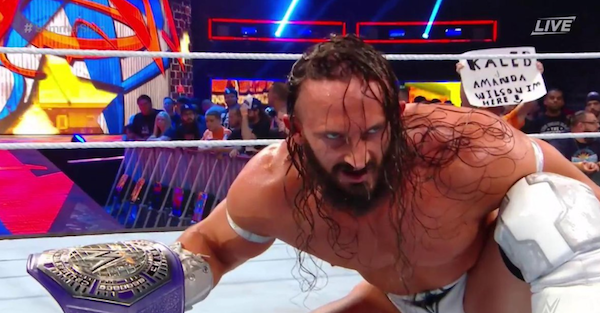 He set the finisher up after getting his knees up to block the senton by Tozawa:

It was a well-paced match between Tozawa and Neville, fighting back and forth before the King of Cruiserweights could eventually get his belt back:

WWE inexplicably moved up the Cruiserweight championship match to Monday Night, resulting in Tozawa defeating Neville for the title on Raw.

Tozawa got the advantage early, connecting on a stiff jab to get the two count before the champ rolled out of the ring ahead of the commercial break. Back from the break, Neville was in control, targeting Tozawa’s shoulder.

Tozawa turned around the comeback, hitting a german suplex. Neville rolled out of the ring and Tozawa connected on two running dive attempts through the ropes.

The win ended Neville’s 198-day reign as King of the Cruiserweights.