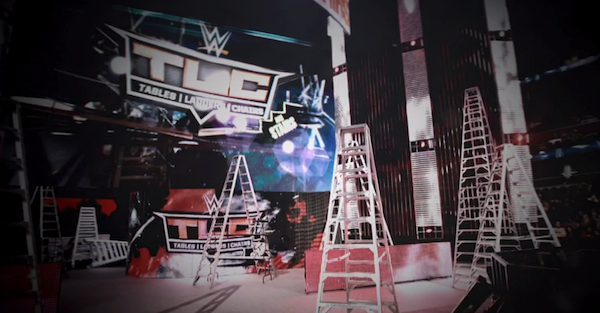 Rumors for 2017 Tables, Ladders and Chairs

According to Wrestling Observer, Joe is slated to have a “one-and-done” rivalry with Lesnar, setting up Strowman-Lesnar for SummerSlam.

The match starts with chaos, but Reigns is clearing house, taking out Wyatt, Joe and now Balor. Wyatt and Joe are now effectively taking out Reigns, Balor and Rollins with the ring stairs, literally circling the ring and knocking each guy down.

Rollins breaks up the alliance, knocking Wyatt to the outside and Joe down on the inside. Rollins tries to attack the Eater of Worlds on the outside, but is stopped. Wyatt hits a DDT to Rollins onto the ring steps. Joe locks in the Coquina Clutch inside the ring on Balor, but he reverses and double stomps Joe. Wyatt attacks him with a chair, then lays out Reigns with the chair. Wyatt sets the chair in the corner and sets Balor up in front of it. Joe tries to tackle Balor, but the former champ reverses and sends him into the chair in the corner.

Reigns powers up with a drive-by on Joe, powerbombs Balor and hits a big boot on Joe before nailing a stiff clothesline on Wyatt. Reigns loads up for the Superman punch before Joe pulls him out of the ring. Wyatt meets them on the outside and slams Reigns on top of the announcer’s table. Rollins tries to dive on the outside onto Wyatt, but he sends Joe into the diving attack. Rollins jumps off the top rope back inside the ring into Wyatt, who hits the Sister Abigail. One-two-Joe breaks up the pin attempt and their partnership has ended.

Balor gets back in the ring, and he’s on fire with a chair, taking the action to Wyatt and Joe. Balor sets Wyatt up on the announcer’s table, Joe grabs him from behind to lock in the Coquina Clutch, but Reigns spears them both through the barricade.

Rollins gets to the top rope and hits an insane frog splash on Wyatt through the announcer’s table. He’s immediately clutching his surgically repaired knee.

Rollins and Reigns circling each other in the ring. Reigns reverses Rollins, hitting the Superman Punch. He only gets a two count before setting up in the corner for the spear. Rollins reverses into a rollup. Only gets the two-count, so he hits a frog splash for the same result. Rollins goes to hit a phoenix splash, but misses. Wyatt enters the ring and is speared by Reigns. Rollins hits a buckle bomb to Reigns, who responds with a Superman punch to Rollins. He then hits Balor with a Superman punch. Balor reverses the spear into the slingblade. Balor hits the double foot stomp and Joe locks in the Coquina Clutch to choke out Balor. Joe is the No. 1 contender after Balor passes out!

Austin Aries starts off hot, but after a double axe handle off the top rope, he appears to tweak his knee. Neville takes advantage and kicks his injured left knee as Aries attempts to get in the ring and it’s all Neville attacking the injury.

Aries makes a comeback, but Neville reverses a diving dropkick from the top rope and the champ locks in the Rings of Saturn. Aries escapes after a rope break. Aries finds his way to the top rope and hits a Sunset Flip into a Last Chancery! Neville slips to the outside, but Aries keeps the hold locked in as the champ taps, BUT they’re on the outside and the ref won’t call the bell. They get back in the ring and Neville eventually gets out of the way. Neville hits the Red Arrow onto Aries’ back and immediately locks in the Rings of Saturn again to get the tap.

Sheamus and Cesaro make a run up the cage to start the bout, but the Hardys pull them back in. The champs have their opponents seated between the rope and cage and are slamming their heads against the cage as the crowd chants “DELETE.”

Elias Samson is in the ring and literally just played a song.

Dar and Swann dual early, but he dips out and tags in Fox, which forces Sasha Banks to enter the ring. Banks reverse a tilt-a-whirl into the Bank Statement, but Dar pulls her leg to the rope after coaxing Swann into distracting the ref.

After a slight comeback, Banks does work on the inside and knocks Fox outside before hitting a double knee dive on Dar after he tried to save his girlfriend. After Dar finds his way into the ring, Swann sets up for the Phoenix Splash and this one is all over.

Intercontinental Championship match (if Ambrose gets DQ’d, he loses the title): the Miz def. Dean Ambrose

Ambrose starts the match off aggressively, attacking Miz and backing him into a corner. WWE teases the disqualification early on, as Ambrose let up on Miz after the count of four in the corner. Ambrose picks up a chair, and they tease another potential DQ before he drops it. Miz fires up and seems to have all the momentum before attempting to hit a double axe handle. Ambrose reverses into Dirty Deeds, but before he can hit it, Miz reverses into the Skull Crushing Finale. Ambrose gets out of that one and we’re back at a stalemate. Maryse tries to get Ambrose disqualified after she slapped Miz, but the ref won’t make the call, instead sending her to the back.

While the ref was discussing another potential disqualification with Ambrose, Miz hit the Skull Crushing Finale on Ambrose for his seventh Intercontinental Championship.

In a back-and-forth contest, Kalisto came out on top, defeating Apollo Crews for the second time in three weeks with Titus O’Neil at ringside.