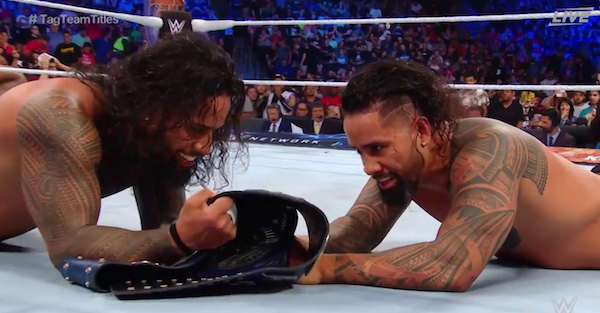 The Usos defeated the New Day during the SummerSlam pre-show to become the new SmackDown Tag Team champions.

Jimmy and Jey Uso landed dueling superkicks and top rope splashes on New Day’s Big E to earn the pinfall and win the SmackDown titles for the second time.

As expected, the match exceeded the expectations of a throwaway pre-show match. Fortunately, it was given the time necessary to showcase both teams as the Usos and New Day went back-and-forth for nearly 20 minutes.

The Usos retain their titles after having lost them to New Day on the July 23 episode of SmackDown Live. Jimmy and Jey initially held the SmackDown titles for 124 total days beginning with a March 21 victory over former champions American Alpha (Chad Gable and Jason Jordan).