Why the WWE has a huge roster problem on NXT 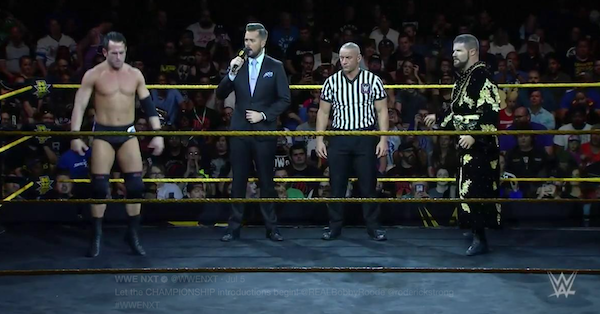 The NXT roster is too big. It?s not too big in the traditional sense, though. It feels like the third WWE brand has two tag teams that are quite large, if you missed WWE very casually pointing that out to you on Wednesday nights in recent weeks, a women?s division that now only includes a new Four Horsewomen in Asuka, Ruby Riot, Nikki Cross and Ember Moon, so it?s not too big in those divisions. It?s too big in one specific area: the main event.

If you don?t believe me, I highly encourage you to open a new tab, open up the ?WWE NXT? Wikipedia page, and have a look at all the potential, realistic NXT champions the company currently employs. (Actually, I?d rather you not, so you don?t forget about the tab that contains this article.) There is the NXT champion Bobby Roode, Aleister Black, Andrade Cien Almas, Johnny Gargano, Adam Cole (soon?), Roderick Strong, Drew McIntyre, Hideo Itami, Eric Young, Kassius Ohno, Tommaso Ciampa, and, while typing out that stacked list, Kenny Omega, Okada, and Magnus just debuted at Full Sail University. (I kid. Maybe.)

Each of those wrestlers have been presented as potential NXT champions at some point or another, but they all can?t get there. It?s not realistic. On one hand, WWE deserves a lot of credit for stocking the shelves in NXT with an insane amount of talent, but there is a downside, and we?re seeing it play out now. NXT is a once-a-week, one-hour wrestling program on the WWE Network and Hulu, with a pay-per-view (PPV) popping up every now and then. Title changes aren?t frequent, and main event feuds last months.
Shinsuke Nakamura and Samoa Joe?s feud over the NXT dragged on for months, and, depending on how the Drew McIntyre vs. Bobby Roode NXT title match goes at the next NXT: Takeover this summer, you could certainly see a scenario in which that feud goes into 2018. The matches will be good, the fans will be into it, but you can?t forget about everyone else. Not when ?everyone else? includes the likes of Itami, Young, Ohno, Strong, etc. But what can you do on a weekly program that is so short, PPVs that are so infrequent, and a main roster that has AJ Styles feuding over a midcard title while Jinder Mahal closes PPVs?

The answer is to make cuts. Less is more, and the WWE has already shown they can acknowledge that as their cuts in pyro suggest. Every show doesn?t need pyro, and WWE doesn?t need to employ every supremely talented to performer in the world. They just need a few — an AJ Styles here, a Samoa Joe there, and even an Aleister Black every now and again — because Creative already struggles enough finding interesting, worthwhile things for its biggest NXT success stories to do on a weekly basis — and yes, I?m talking about Finn Balor and Nakamura.

And yet NXT is still fine. In fact, it?s in the best place it?s ever been in. It?s most enjoyable hour of WWE program each week no matter what kind of 205 Live propaganda the company pushes into your earballs. You know what you?re getting, it?s a logical show, there will always be at least one match that delivers, and Roman Reigns and Jinder Mahal are nowhere to be found.

But there will be a day of reckoning for NXT officials. How much longer can you keep Itami in Orlando? How much juice does the Roderick Strong story have if McIntyre is next in line for the belt? When does Aleister Black actually set his sights on the title? When do you finally release Almas? These are all questions that will need to be answered sooner rather than later. There are only so many spots, and they?re all currently filled.