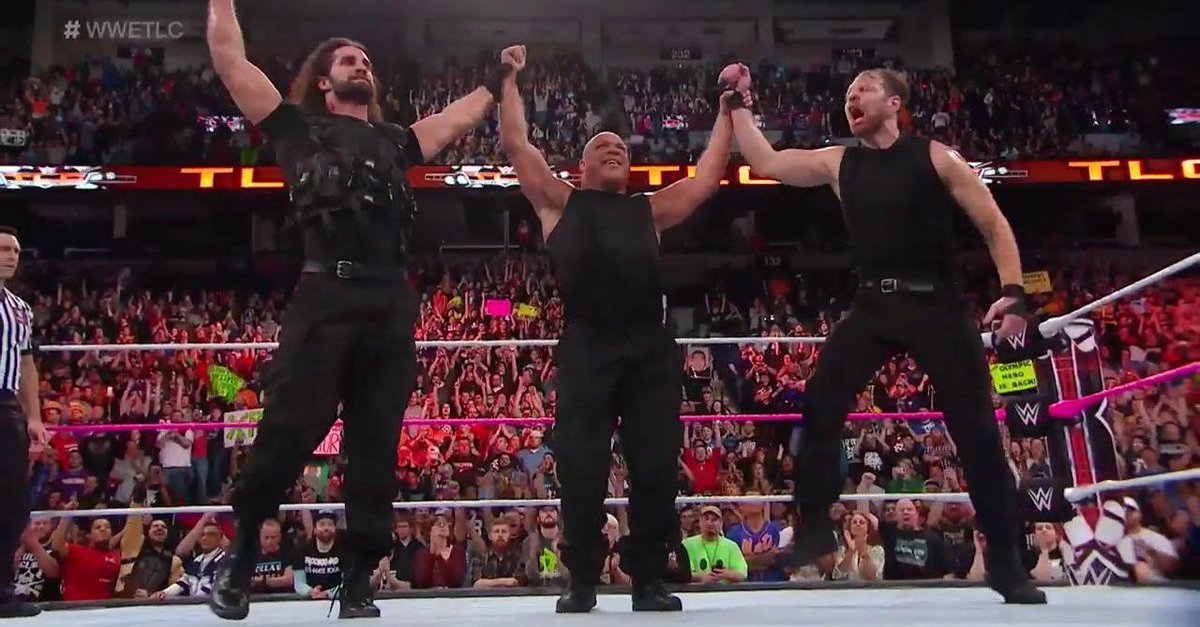 When dad takes you to the mall pic.twitter.com/3a7NLO9DMc

With the match taking this strange turn just days before, you knew that it was going to be modified to keep Angle safe from legit harm but it was still nice to see him out there. after some great spots and a multiple German suplex sequence it was Braun who took Angle out for good but before that we had this pretty awesome spot.

Rollins and Ambrose through the table! pic.twitter.com/am8BjDI3RI

If you were looking for work rate and storytelling, this was not the match for you. This feels like the last three years of WCW shoved into 40 minutes sprinkled with tables ladders and chairs. All that’s missing is Judy Bagwell on a forklift and spin the wheel and make the deal.

After destroying everything and each other (except a table) the five-man unit started to turn on each other. Kane and Strowman started fighting and then Braun Strowman was put into the garbage truck, yes a garbage truck. See, I told you we were venturing towards WCW-Russo like territory. As it appeared that the Miz would pick up the win, Kurt Angle’s music hits…

Kurt, Dean and Seth take out The Miz and win the match. It wasn’t a classic but it also doesn’t belong in the worst matches of the year category. Maybe it does. I’m not sure, it was something that we’ll all remember for a while though.

Due to a meningitis outbreak, Bray Wyatt was not able to compete in the match vs. Finn Balor so AJ Styles steps up and leaves the WWE SD Live’s South American tour to face Finn Balor at TLC. It’s almost like WWE 2K18 has come to life (please send me the game 2K, that’s all I ask.).

In a match that I think we will see again at Survivor Series, both Styles and Balor went all out with fantastic displays of offense. It’s crazy to think that this is the first time that these to have gone one-on-one in a ring together.

The first to leaders of the Bullet Club (yes I said it, come fight me Vince) had an all out slugfest for a match that wasn’t official until Friday afternoon, it was for my money the match of the night. Finn hits the coup de gras on Styles and wins the match. After the match is where the smarks died and went to heaven…

When Vince saw the Too Sweet being put up. pic.twitter.com/pw5Z5D8Nhr

Asuka on the main roster, be still my heart.

Although we all knew what was coming, this was an overall decent match. Emma got some offense in was something that was good to see. I mean we knew that Asuka would win the match but it it still had some solid back and fourth, just like their match in NXT. After fighting off a German suplex, Emma’s escape attempt is thwarted by Asuka with a quick knee to the face.

Asuka continued the attack wearing out Emma with kicks to the shoulder and the arm. The two got into some great chain wrestling as Asuka remained on the attack. After a minor trip outside the ring, Asuka uses her quick offense once again with  quick kick to the head and Asuka puts in the Asuka lock, Emma taps and the empress of tomorrow has her first main roster win.

Mickie James comes out in a denim getup that reminds me of Justin Timberlake and Britney Spears at the VMA’s…You know the one, I don’t even have to post it. You know what I’m talking about.

It’s very clear that James and biscuit bu-I mean Alexa Bliss have great chemistry in the ring. Some great chain wrestling saw Alexa Bliss take advantage of her elder opponent and even showing some new offense that we haven’t seen before, which is always refreshing. For a match that didn’t have any action take place outside the ring it was very physical and watching Mickie James trade rallies with Bliss was worth the time it was given.

Bliss picked up the victory by playing possum and taking out James with a DDT to retain the title.

Enzo comes out to cut a promo and has a very scratchy voice, can barely talk and I’ve gotta tell ya, it sounds great. I’m not one for watching what people wear in matches but Kalisto and Enzo’s attire reminded me of a bad NFL color rush matchup.

Despite the ugly attire from each, I really enjoyed the match, even though Amore isn’t a great worker and doesn’t have great work rate I am impressed with just how well Enzo has embrace the heel role. After a somewhat controversial poke to the eye into his finisher and got the pinfall to a 1-2-3 to become the two-time cruiserweight champion. After the match he talked with WWE’s Charly Caruso and said he had only one person to thank for his victory and that was himself. Ahhhh humble Enzo strikes again.

A second cruiserweight match on a PPV?!? What is this WCW? Regardless, once this match was first announced, I knew these four would be able to put on a good match. Great teamwork from Swann and Alexander, which makes me want them to be a tag team.

. @CedricAlexander connects with a Tilt A Whirl Backbreaker!! #WWE #WWETLCpic.twitter.com/axg5NqjZUI

Kendrick attempted to take advantage late in the match up but Alexander hit Kendrick with a lumbar check and picked up the win over Kendrick and Gallagher. However, the story of this match is just how good Swann and Alexander worked together. Even Carmella’s….friend though as much.

@CedricAlexander and @GottaGetSwann make an amazing tag team, hope to see more of it #WWETLC

Best of the Rest