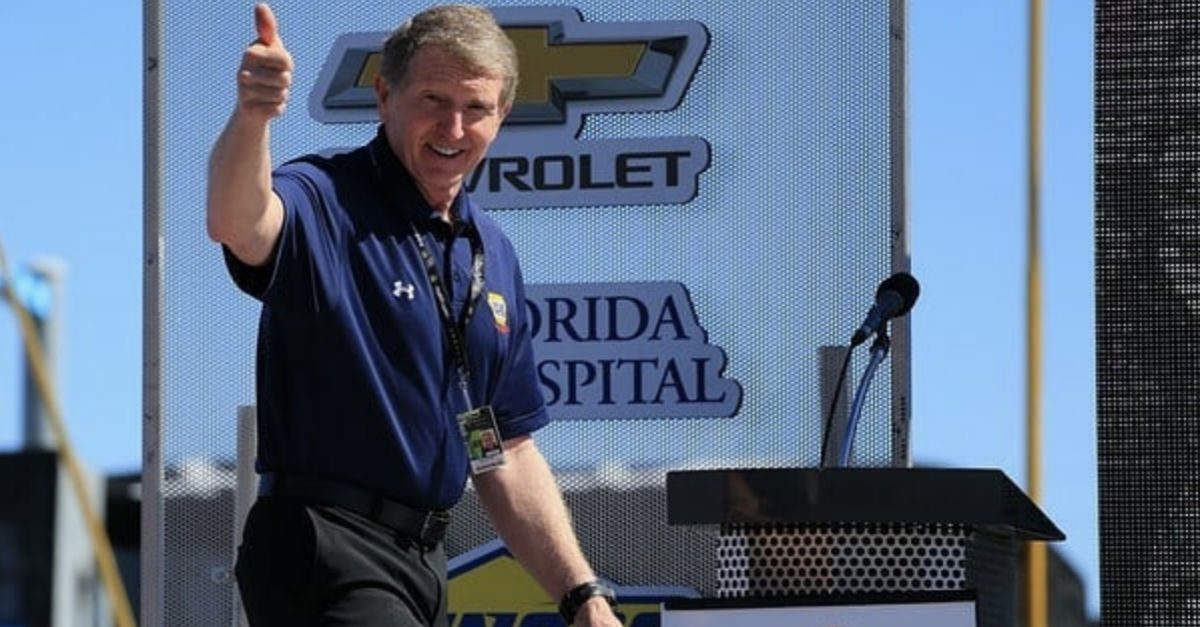 The last couple weeks for the Elliott family have been momentous to say the least.

For one, you have 22-year-old Chase Elliott, who snagged his first Cup Series win at Watkins Glen International on August 5. Then, there’s Bill Elliott, — the 1988 Cup Series champion, NASCAR Hall of Famer, and 16-time Most Popular Driver — who, a day before his son’s big win, officially announced that he would be coming out of retirement to race for the last time.

Make sure you have a pen and paper on hand, because you’re going to want to jot these details down: Elliott is set to drive the #23 GMS Racing Chevrolet on Saturday, August 25 for the Johnsonville 180 at Road America road course in Elkhart Lake, Wisconsin.

Not only will this be Awesome Bill from Dawsonville’s first NASCAR Xfinity Series race since he ran in the Sam?s Town 250 at Memphis Motorsports Park back in 2005, but it will also be his first NASCAR race period since the Coke Zero 400 at Daytona International Speedway in 2012.

This is what Elliott had to say about his NASCAR return, according to Autosport.

?I would say in the [NASCAR] national series, this will be my last race. I?m not saying I wouldn?t do something else. I?ve been enjoying the vintage car races the last couple of months. I?m going to run a Trans-Am car at Mid-Ohio next weekend just to tinker around with. I?m just trying some different stuff. I?ve been through so many evolutions of racing and I just want to see what this stuff is like.”

?I was watching the Xfinity race [at Watkins Glen last weekend] and man, those guys are good. I just would like to see how are these cars are today, how are things going along and just kind of see what it?s all about.”

?We [Elliott and GMS Racing team president Mike Beam] kind of got to talking about it and they asked me to do it and I thought, ?Well, what the heck,? ? I really don?t have anything to prove. I don?t know what my expectations are. After [Saturday], I texted my team and said you all might want to put A.J. [Allmendinger] back in the car after what he did today.”

?Win, lose or draw, go up there, I?ll first off have a good time, enjoy the moment and just see what goes from there. I have never officially retired.?

If you’re not familiar with Elliott’s illustrious career, here’s the quick and dirty: In 828 Cup Series starts, Elliott has 44 victories, 175 top-five finishes, 320 top-10 finishes, and 55 pole positions. He won the Daytona 500 in 1985 and 1987 (and, as mentioned before, the Cup Championship the year after that).

He’s a record-holding 16-time Most Popular Driver, and probably could have earned that honor more times if he didn’t withdraw his name from the ballot in 2002. And, of course, he’s been inducted into the NASCAR Hall of Fame and the Motorsports Hall of Fame of America.

Needless to say, Bill Elliott is definitely one of the best to ever do it, and we can’t wait to see his do his thing one final time at Road America on August 25.

I can’t believe Bill Elliott is going to run a @NASCAR_Xfinity race. Like Bill just been waiting on someone to ask him.

Read More: Dale Earnhardt Jr. Had This to Say About Brian France Following His Arrest