No NASCAR driver in his right mind wants to withdraw from the playoffs. But, when Kurt Busch found out that the head injury he sustained during qualifying for the July Pocono race would cause him to miss the start of postseason competition, he decided that he would rather withdraw now than do what he would consider to be a disservice to the fans and his fellow drivers.

"I respect the sport of NASCAR, my fellow drivers, and the fans too much to take up a playoff spot if I know I can't compete for a championship this season," Busch said via an official statement posted to social media. "The decision was not an easy one, but I know it is the right thing to do."

Bubba Wallace is among those who wishes that the NASCAR vet could've bounced back from his concussion-like symptoms and finished off the rest of the season. But in an interview answer responding to Busch's announcement, Wallace showed nothing but support for his 23XI Racing teammate.

"I think the atmosphere is that we're all bummed," Bubba said. "We all hate it for Kurt. Obviously we're not in his shoes so we can't observe it to the full extent, but I hate it for him." 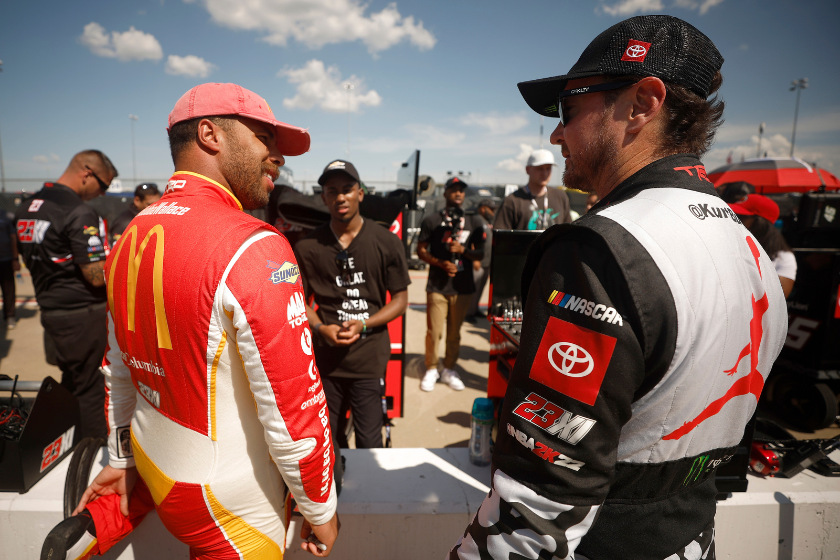 While 23XI Racing co-owner Denny Hamlin is also sympathetic to Kurt's situation, he also wanted to make it clear that the 2004 Cup champ's withdrawal from the playoffs was in no way influenced by Hamlin or any other 23XI Racing officials.

"No, this is a Kurt thing. This is definitely not us by any means," Hamlin said.

"We've been very clear and transparent with Kurt that we're going to support him no matter what. If he wants to stay in there and come in for the last race of the first round, like, let's go. Let's go try to win it. So he just felt like this is the best decision for him, you know, not to hold somebody else back from going for a championship that he thought maybe had a better chance at it. It's still unknown whether he would be able to come back. So this is all Kurt's decision, and his future will always be his decision."

Obviously, Hamlin is disappointed by the way things have turned out, as Busch was 23XI Racing's last chance to end the 2022 season on a high note. Hamlin himself has had to sit out races due to injury, but he understands that Busch's situation is entirely different.

"The team and him just kept getting better, so that's the tough part about it is we had so much momentum going with that 45 car before that happened," Hamlin said. "So I mean, that part was tough, but it's the only thing I can relate is to when I had to sit out races because my back injury in 2013. I mean, it sucked then, but for him, I mean, it's nothing physical as far as like something that hurts. It's just something that you know is not right in the brain. So, you know, that's something that you got to have 100%. You can't fake that part of it. The results will show your performance and anything else on the race track if your mind's not right. I know he's frustrated and emotional about it, and we just want to support them in any way we can and give him the time off that he needs to to get better."

As far as Busch's future with 23XI Racing is concerned, that appears to be up in the air. He is still set to return to the team in 2023, but a serious head injury can certainly change things. No one knows that better than Dale Earnhardt Jr., who announced his NASCAR retirement in 2017 after sitting out half of the 2016 season due to a concussion. At 44 years old, Busch is no spring chicken either. But, if he still has the NASCAR championship on his mind, he may have a few years left in him yet. Here's just hoping that he's able to make a significant recovery first.

MORE: Dale Earnhardt Jr. Knows What Kurt Busch Is Going Through All Too Well