Congratulations to the Wallaces! NASCAR driver Bubba Wallace and his longtime girlfriend Amanda Carter started the new year off on a high note when they tied the knot on December 31, 2022 at a JW Marriott in Charlotte, North Carolina. They were joined by 250 guests, including Ryan Blaney, who was a groomsman, William Byron, Daniel Suarez, and Dale Earnhardt Jr.

"Getting married, and starting a new life together, I'm just so excited to have a good one in my corner," Bubba, who drives the No. 23 Toyota for 23XI Racing, told PEOPLE. "We have so much fun together."

When it came to the food at Bubba and Amanda's New Year's Eve wedding, it started out fancy enough, with such appetizers as tuna tartar, duck meatballs, blue crab croquettes, and whipped ricotta. Then, for the main course, there was a buffet-style setup that featured a little bit of everything, from Italian and Asian stir fry to burgers and tacos. Of course, there was also an open bar.

But, the real kicker came around 1 a.m., when the newlyweds treated their guests to a McDonald's food truck that served chicken nuggets and french fries. Clearly, it pays to be sponsored by the Golden Arches.

Congratulations brother @BubbaWallace and Amanda on this happy day! ??? pic.twitter.com/2bAmOeUZzA

After the festivities, Bubba and Amanda headed to Bora Bora for their honeymoon. Clearly, these two love themselves a good party.

"We just have such a good bond," Amanda said. "I love the time we spend together. We could sit around together all day every day and we don't get tired of one another. And he's also handsome and charming."

Who Is Amanda Carter? 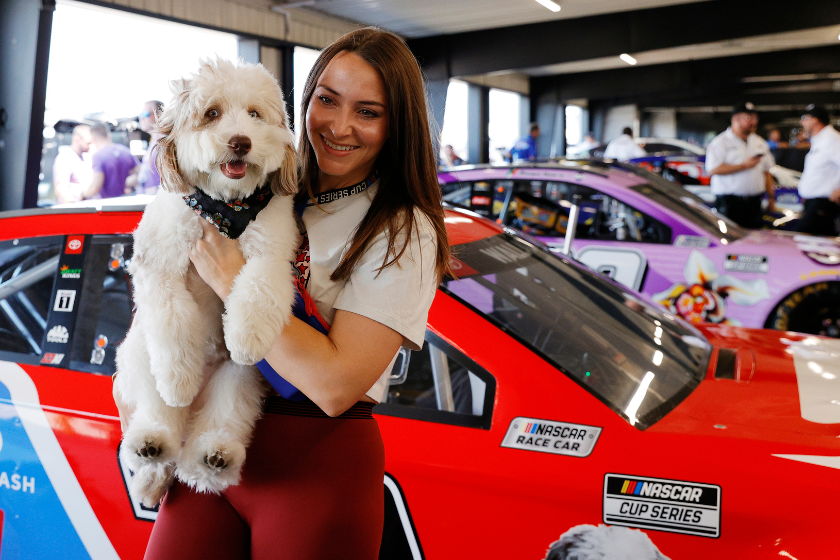 Bubba Wallace and Amanda Carter started dating in 2016, but they actually met when Wallace was a sophomore and Carter was a freshman in high school. As Bubba told PEOPLE, it wasn't a love-at-first-sight situation. At least not for Amanda.

"She thought I was nice, but not attractive," Wallace said. "I just remember seeing her and I was like, 'Wow, she's beautiful.'"

Carter added, "We were in Spanish class in high school, and we sat near each other. I don't remember first meeting, but he would always try to cheat. We were friends. There was three or four of us that did all of our projects together and he always would try to cheat off my exams because I was much smarter than he was!"

Things never got romantic between Bubba and Amanda in high school ("I even went to his prom with somebody else from his school," she said), but they kept in touch after graduation. Finally, when Amanda was a senior in college, Bubba invited her to one of his races in Las Vegas. That's when things really started to click romantically.

"It was my senior year spring break," Carter recalled. "And I didn't have plans at the time. And he was like, 'Well, I'll be out in Vegas while you're on spring break, do you want to come?' And I said, 'No.'"

"And then he asked a few times again, and I eventually said yes. I was like, well, I have to get to know him more if we're going to be on vacation for a week together. And we started dating when we got out to Vegas, because we had been talking so much. We had really started to really like each other."

After five years of dating, Bubba asked Amanda to marry him in July 2021, and on December 31, 2022, the couple officially became Mr. and Mrs. Wallace.

Carter, who is a senior financial analyst at the Bank of America in Charlotte, was featured prominently on Bubba's Facebook docuseries Behind the Wall as well as the Netflix docuseries on Wallace called RACE: Bubba Wallace.

According to her official Instagram account, Amanda is an aspiring artist and features her paintings on her mandyinthestudio account. She's also the proud mom to Asher, a mini Aussiedoodle. What a cute pup!