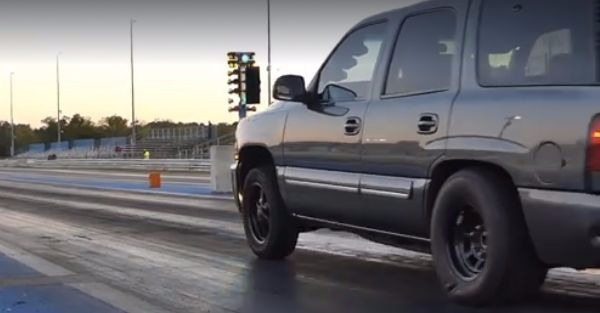 The Chevrolet Tahoe, or as most call it, a drag racers dream. Chevy did it right on this one. Light weight, aerodynamic and a suspension system that’s always set on kill. You can’t get a better platform to build an all out drag racing machine out of.

Wait a minute, this isn’t right at all. The Tahoe is a massive brick designed to haul a ton of kids around and look cool doing it, because you wouldn’t buy a minivan. It weighs about 1 million pounds, has a ride similar to a mid 70’s Cadillac and is just about the worst car you can pick to go racing, right?

For a man named Shane Cook, the original intent of the GM design team for the Chevy Tahoe meant nothing. He wanted a 9 second drag SUV and so he did what any American would do, he built one. Cook’s Tahoe is grey, wears massive drag radials, inhales forced air from a big turbo and can even lift the front wheels off the ground. This truck is the ultimate grocery getter, baby hauler, road tripper and ass kicker.

In this video posted to Shane’s Facebook, he shows how his creation stacks up against a 6th Gen Camaro. You don’t even need a spoiler alert on this one because you know what went down. The Tahoe destroys this thing and does it with ease. The truck runs a 9.9 @ 137 and looks so natural doing it. The car features a 5.3 liter LS engine with an S478 single turbo. He launches off the foot brake but with the assistance of a 2-step rev limiter. Cook posted a screen shot of the front wheels coming off the ground and just so you know, that picture makes a great computer screen saver.

Not too many details on the rest of the build just yet, but we’ve reached out to Cook and will report back with any more juicy details on this one. Oh, and the track eventually told him he had to slow down or install a roll cage next time. You can order a roll cage for a Tahoe from Jegs, right?

Related: Painter’s Tahoe Is A Sleeper Speed Demon In Disguise