Country music and NASCAR go together like fireworks and the Fourth of July. It's a relationship that most folks trace back to Marty Robbins, the country music star who had a brief stint in the sport in the early '70s, though it likely goes back even further than that. It's hard to think of a time when stock car racing and country music weren't part and parcel of a niche facet of American culture.

With that in mind, no NASCAR driver, past or present, encapsulates the symbiotic relationship between NASCAR and country quite like Dale Earnhardt. Known most famously as "The Intimidator," Dale Sr. had another somewhat lesser-known nickname of the Man in Black, which he got from his black No. 3 Goodwrench Chevrolet. Is it a coincidence that he shared the moniker with country legend Johnny Cash? Doubtful. After all, he raised Dale Earnhardt Jr. on the greats: Cash, Nelson, Jennings.

From listening to the hits as a North Carolina kid to becoming friends with actual country stars as a NASCAR driver to becoming immortalized by musicians as a late legend, Dale Earnhardt's impact on country music (and it's impact on him), is one of NASCAR's most underrated off-the-track stories. And, as you'll see, the story doesn't end with Dale Sr. 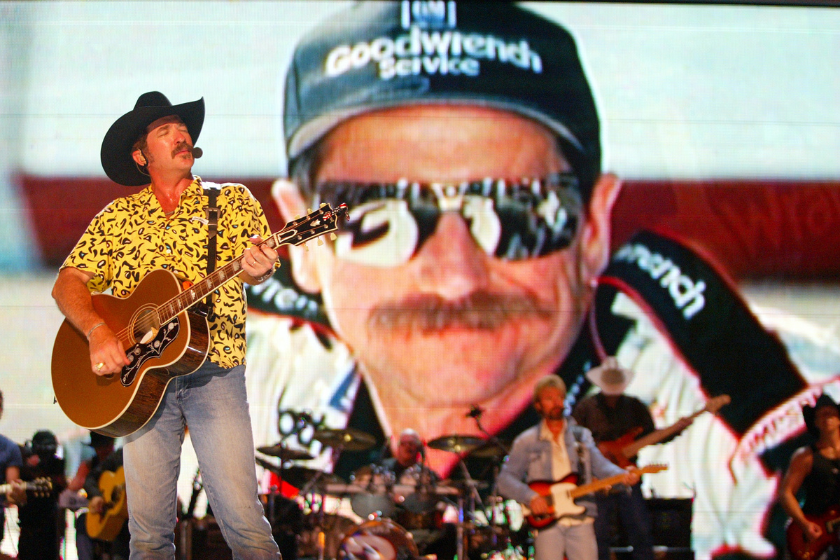 Dale Earnhardt Sr. got to do what most country music fans never do: he got his own song on a legit studio country album. Guess that's one of the perks of being a legendary NASCAR driver.

Released in 1985 by World Series of Country Music, Stock Car Racing's Entertainers of the Year featured 21 songs sung by NASCAR drivers. You had Kyle Petty's "The People Who Love Me (Worry a Lot)," Bill Elliott's "A Crazy Racin' Man," and Terry Labonte's "The Iceman's Hot," just to name a few. Studio execs were clearly calculated in saving NASCAR's GOAT for last on the track listing, as Dale Earnhardt's "Hard Charger" is about the seven-time champ's reputation for being a badass behind the wheel. I don't know why they didn't just call it "The Intimidator" after Dale's iconic nickname. But, hey, I'm not in the music business.

Now, if you've never heard of Stock Car Racing's Entertainers of the Year, don't feel ashamed. While the album performed better than NASCAR Goes Country, the first country album featuring NASCAR drivers that was released in 1975, the second go-around was still a flop, selling only 20,000 copies. Despite Dale Sr.'s contribution to a disappointing footnote in country music history, he would go on to be the best to ever step foot behind the wheel of a stock car. He wasn't going to be tossed aside by the country music industry simply over a flopped album.

Throughout the '90s, Dale Earnhardt developed a strong friendship with Kix Brooks and Ronnie Dunn, the songwriters and vocalists behind the country music duo Brooks & Dunn. In 1993, the Nashville stars released the song "Sunday Money" as a tribute to their friend from Kannapolis, North Carolina. Dale liked the song so much that he named his yacht after it.

Four years later, Kix and Ronnie recruited Dale to appear in the music video for their hit "Honky Tonk Truth." The duo got the idea while they were at a race at Indianapolis Motor Speedway and walking through the garages on the way to Earnhardt's hauler. All of a sudden, they heard a fan behind them whisper to her friend. "That's him, isn't it?!" From the back, she had mistaken Kix for Dale. It was then that Brooks & Dunn realized the uncanny similarity, and they knew they had to take advantage of the double trouble for their next music video. Earnhardt was apprehensive at first (probably having bad flashbacks to his foray back in '85), but eventually he acquiesced and came through for his buddies -- with some liquid courage, of course. He ended up liking the finished product so much that he called Kix personally to deliver his rave review.

In 2001, Dale Earnhardt tragically died a last-lap crash at the Daytona 500. He was 49. His untimely death not only sent shockwaves through the racing community but was devastating for country artists and fans everywhere.

"He had a gusto for living life like no one I've ever seen or ever will see again," Kix Brooks said after his friend's death.

Following The Intimidator's passing, country music's finest mourned him like he was one of their own. Days after a 3,500-person private service in North Carolina that included a performance from Alabama's Randy Owen, 8,000 fans gathered for the public memorial in Nashville, where Vince Gill, Mark Collie, and Steve Wariner sang in tribute. On June 28, 2003, Alabama, Sheryl Crow, Kenny Chesney, Goo Goo Dolls, Brooks & Dunn, Hootie and the Blowfish, and Delbert McClinton performed at The Dale Earnhardt Tribute concert at Daytona International Speedway. The show, which was the first non-racing event held at the iconic race track was televised and the proceeds went to the Dale Earnhardt Foundation.

Today, Dale Earnhardt's name continues to be immortalized in country song after country song. There have been full-on tribute songs like "The Intimidator" by The Charlie Daniels Band, and songs featuring subtler tributes like Tim McGraw's "Southern Voice" ("Hank Williams sang it, Number Three drove it"). Trace Adkins, Jake Owens, Montgomery Gentry, and Ronnie Milsap have all referenced Earnhardt in their songs. Dale Sr. has even crossed genres, with rap legends like Eminem and Kendrick Lamar name-dropping him in tracks.

Needless to say, Dale Earnhardt's impact on NASCAR was more than felt during his career. His aggressive driving style, 76 Cup wins, and seven championships saw to that. But, his influence on music, particularly on country music, may have been felt most prominently after his death.

The Love of Country Passed From Father to Son 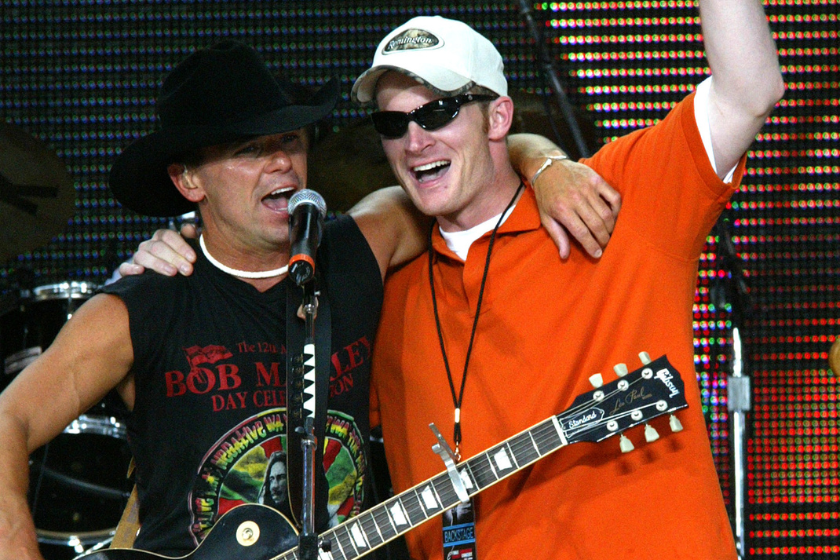 Dale Earnhardt Jr. was raised on country music, with a particular affinity for the outlaw artists.

"I remember listening to all the greats -- Johnny Cash, Willie Nelson, Waylon Jennings, Hank Williams Jr., and all those guys," Dale Jr. told The Boot back in 2009. "Dwight Yoakam [is] really cool and seems like a good guy and really laid back. He seems real intricate, kind of unique in his personality."

For Junior, who these days is a huge fan of artists like Kenny Chesney and Eric Church, the intersection between NASCAR and country happened in a literal way when he was a boy growing up in North Carolina.

"When I was a kid, the races weren't all on TV, so you would listen to the races on these country music stations," Earnhardt told One Country in a 2018 interview. "When the race would be done, there would be country music playing, and I loved it."

Much like his dad, Dale Earnhardt Jr.'s eventual NASCAR stardom moved him beyond the point of diehard country fan, as he starred in music videos and even formed relationships with a number of country stars. Having been featured in such videos as Trace Adkins' "Rough & Ready" and Sheryl Crow's "Steve McQueen," Junior has gone on to forge friendships with the likes of Dierks Bentley and Blake Shelton. There was even the time when he had a drink with George Strait in Key West (a story I recommend checking out when you get the chance).

Junior's friendship with Cole Swindell goes beyond admiration or fandom. In 2016, the Georgia-born musician released "You Should Be Here," which touches on the unexpected death of his father in 2013. Clearly, the subject hit close to home for Earnhardt, and he reached out to Swindell to let him know how much the song touched him. During an episode of The Dale Jr. Download podcast in 2021, Dale and Cole touched on their grief-formed bond.

The Earnhardt-Swindell connection doesn't stop there. A couple of years back, Swindell -- a longtime NASCAR fan -- co-wrote Daddy, Jesus & Earnhardt with Adam Sanders. Released in 2021, the song perfectly encapsulates the strong bond of the Earnhardt name on country music in just a few lines.

They mean everything
That racin', raisin', prayin' made us who we are
Daddy, Jesus, and Earnhardt