You don't have to be a high-profile stock car racing analyst to know that the Earnhardt name is the most prominent name in NASCAR. Racking up seven NASCAR championships and 76 Cup Series wins before his untimely death at the 2001 Daytona 500, Dale Earnhardt Sr. built an impressive legacy almost singlehandedly.

Nobody understands that legacy quite as well as Dale Earnhardt Jr., Dale Sr.'s son, and Jeffrey Earnhardt, Dale Sr.'s grandson. For an episode of the Dale Jr. Download podcast a couple years ago, part-time Xfinity Series driver Jeffrey joined his uncle Junior to discuss what it's really like to compete in NASCAR as an Earnhardt.

Living Up to the Earnhardt Name

When it comes to what the family name means to the now 33-year-old Jeffrey Earnhardt, one word sums it up perfectly: legacy.

"I'm not telling you anything," Jeffrey tells Dale Jr. during the podcast. "It's awesome what Papaw Dale's built and you and Daddy (Kerry Earnhardt, Dale's half-brother). The whole family's continued to carry on that legacy. That's what means the most to me -- and seeing how much it means to other people."

"It's incredible to see fans -- hell, this past weekend, I was just hanging out at the (Las Vegas Motor Speedway) track, but I ran into a lady that I ran into last year. And she just bawled like crazy when I walked up and hugged her, and she did the same thing this weekend. So that speaks volumes. (She broke down crying) big time. And that's cool to see, and that, to me, is what makes our last name so special and knowing what it means to other people. It's kind of mind-blowing really."

Jeffrey has been hearing criticism from folks his entire career on not being up to live up to the Earnhardt name, but having run in 76 Cup Series races and 140 Xfinity Series races, the Mooresville, North Carolina native has learned to brush it off by now.

"You hear it all the time, you know? And it's haters but at the end of the day, that don't matter," Jeffrey said, adding:

"Obviously, expectations are high, and people automatically assume just because of your last name, you're gonna win races. And unfortunately, wins don't come that easy. But I feel like because you grow up in it, you kind of understand how to channel that pressure and not let it sit on your shoulders."

"And I feel like I've been able to handle that pretty well and know that I'm cutting my own path. I'm not you, I'm not Pawpaw Dale."

Tuning Out the Haters 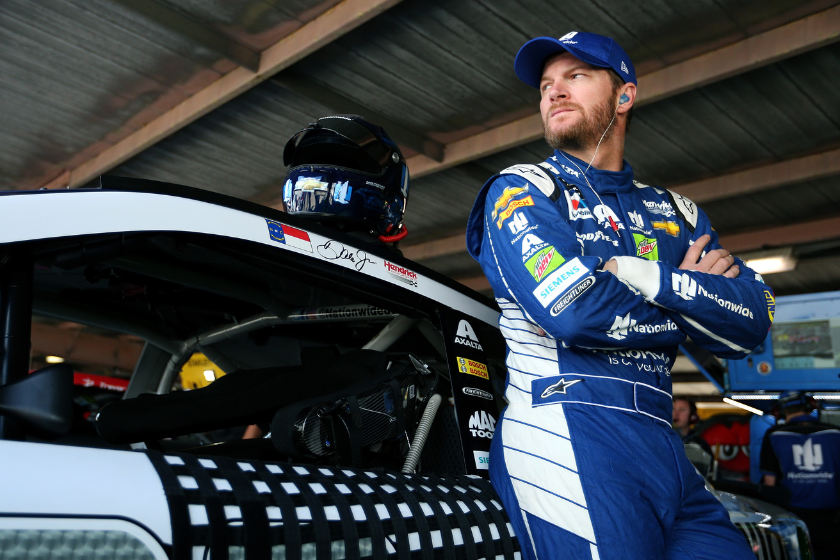 Dale Jr., an NBC Sports commentator and co-owner of JR Motorsports, knows what Jeffrey's talking about all too well and chimed in with his own two cents, mentioning that even now, the 15-time Most Popular Driver and two-time Daytona 500 winner still has people telling him that he wasn't good enough.

"Even after I retired, I still hear that I rode my dad's coattails all the way through my career. It's frustrating because, just like Jeffrey -- he's had to work and there's times when he's had to sacrifice and do things differently than maybe his dad would have done or Papaw Dale would have done," Dale Jr. said.

MORE: Dale Earnhardt Jr. Shared a Rare Photo of His Dad That Had Everyone Asking One Big Question