Chase Rice may only be 36 years old, but the Asheville, North Carolina native lived many lives before finding mainstream success as a country music artist. He's been a college football player, a NASCAR pit crew member, a reality television star, and even a volunteer firefighter. As it turns out, Rice's ultimate dream was to pursue an NFL career, but he suffered a serious injury while playing linebacker for the University of North Carolina football team. To this day, Rice considers his time as a college football player the hardest job he ever had, even more so than NASCAR.

"The hardest job I ever had was college football," Rice said.

"It isn't a job -- it's a full-time job, but you know, back then we didn't get paid for it. But that was much harder [than NASCAR], because there's just a more strenuous, longer season. Well, I don't know about a longer season, but it was just harder -- it flat out was. A 4 1/2-hour day, when you're playing the whole time, is a lot harder than five or six pit stops."

After graduating from UNC, Rice was given the "unbelievable opportunity" to try his luck as a NASCAR pit crew member, thanks to a connection from a former coach. After getting picked up by Hendrick Motorsports, he got his start as a rear tire carrier for Ryan Newman's Nationwide Series car. Rice then transitioned to Jimmie Johnson's Sprint Cup Series car and won two championships with the Lowe's team. Despite the pressure that comes with working for one of the best NASCAR drivers of all time in a job where every millisecond counts, Rice still feels that it doesn't really compare to what he did out on the gridiron.

"The hard part comes when you've got a guy like Jimmie Johnson and championships on the line," Rice continued. "So there is a whole lot of pressure. [NASCAR] is a very, very hard job. But for me, football is harder." 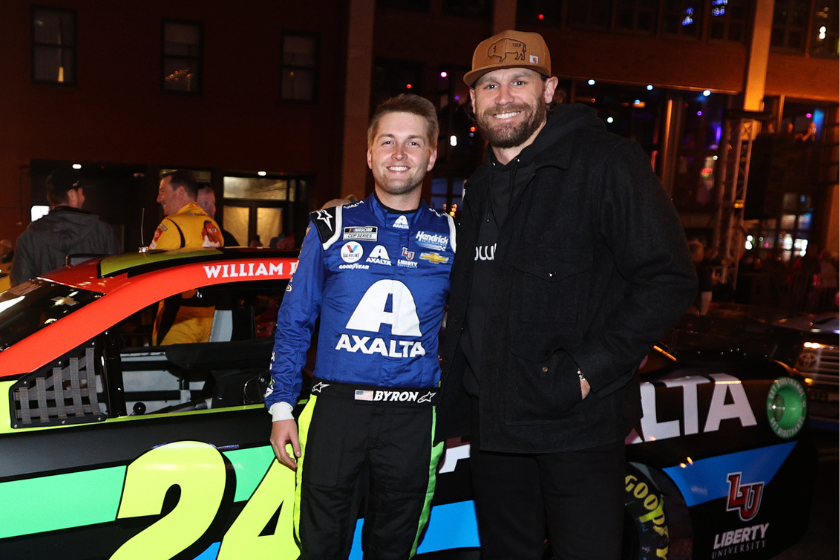 After Chase Rice's time as a pit crew member ended, he was selected as a cast member on Survivor: Nicaragua in 2010. He credits his time on the CBS reality show show as an important stepping stone on the way to achieving his goal of making it in the country music industry.

"I wanted the adventure, and that was cool," he told Fox News Digital. "But that also led me to being able to have the funds to move to Nashville and start writing songs."

"That was my dream and also being on an island for 40 days, not having a whole lot to do, allows you a lot of time to think. That was when I really realized that I want to chase this dream. It's a dream that was far from reality and somehow became reality."

Eventually, those 40 days of reality TV adventure also came and went, but Rice never stopped writing and pursing a music career, even while working alongside the Wildland Firefighter Foundation through the "Protect our Protectors" campaign. During his stint with the WFF, which he calls an "eye-opening" experience, Rice went through two different types of firefighter training and even helped firefighters stop an actual wildfire.

"The fire spreads so fast that you can understand how so many lives are lost every year just with how dry it is out here and how dangerous that job really is," Rice said. "Really can't comprehend that until you're out there with them fighting a fire."

While Chase Rice has had plenty of interesting and wild experiences over the years, he doesn't need to hop around from job to job anymore. With five studio albums under his belt (and a sixth on the way), Rice has finally achieved his dream of making it as a country musician. It may not have been his first dream, but I'd say it's been working out pretty well for him so far.

MORE: Jimmie Johnson and Chad Knaus Once Dominated NASCAR, But Their Relationship Was Full of Speed Bumps