It's no secret that NASCAR drivers get paid the big bucks to do what they do. That said, the racers aren't the only ones making a good living. Although it's extremely hard to get into the position, securing a spot as a pit crew member for a NASCAR racing team will reward you with a pretty comfortable lifestyle, as well.

Now, these guys on pit road are superstars in their own right. To even be considered, they must possess absolute mastery of automotive knowledge. Tire changing and refueling may not sound like rocket science off the jump, but these folks know more than you think. As a matter of fact, just about all pit crew members can identify and assemble every single piece to a race car.

On top of mechanical knowledge, they also have a unique athleticism that allows them to move at lightning-quick speeds during pit stops on race day. Let's check out what it takes to get the job, and how much it pays.

How Much Do NASCAR Pit Crew Members Make? 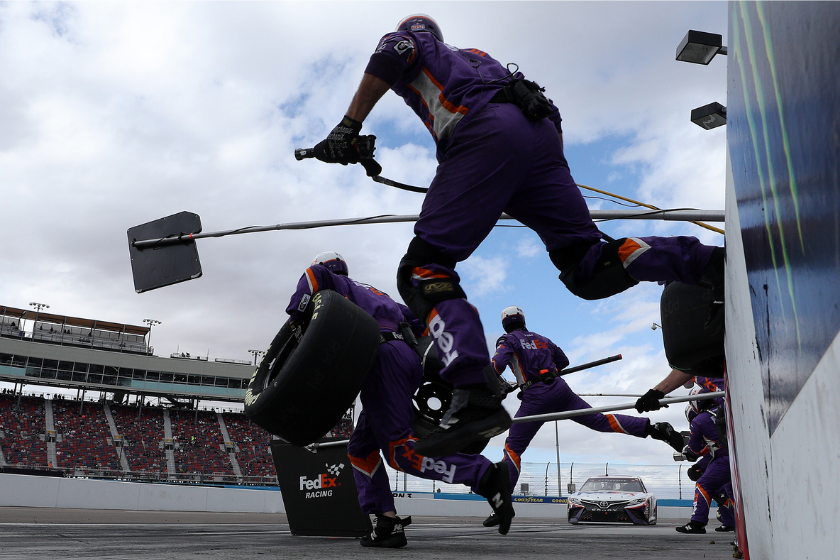 For the average person who wants to pursue this type of career in auto racing, the traditional path would require years of schooling to gain some experience as a mechanic. After mastering the general automotive knowledge, you'd probably want to consider pit crew-specific training. Here, they'll go over everything from the race engines to aerodynamics to chassis repair. Welding experience would also pay off, because you'll need to learn how to build the body panels and roll cages during this training.

So, let's assume you've mastered stock car biology, and you finally land a job with a NASCAR team. You'd likely start out in an entry-level job as a mechanic for the racing team before you'd get a shot at a tryout for the actual pit crew team. As a mechanic, there are some benefits, including a less-stressful environment. These guys get to do their work in the comfort of a shop in between the actual races.

They may not be required to move as fast as the pit crew, but they make up for it with extreme accuracy. A job as a rookie mechanic can bring in an average salary between $45,000-$65,000 per year. If you have a high level of engineering knowledge, or you've gained enough experience with the team, the base salary can break through the $100,000 per year barrier.

As for the team members, they get paid a premium for their extremely quick and precise repairs during the races. Physical demands are also extremely high for these positions, so you'll often find former athletes doing the job. However, their hard work is rewarded with an annual salary in the realm of $150,000. The actual number can vary depending on the individual's job description.

Tire carriers will break into six figures, but they won't get paid nearly as much as the higher-pressure jobs like a tire changer. You screw up one lug nut on a set of new tires, and it could cost you the race. The jackman and fuelers also land on the higher side of the pay, and the crew chief has potential to make around $200,000 each year.

We've all watched different NASCAR Cup Series races and seen these pit crews in action. Those guys are truly a different breed, and they defy the laws of physics each and every time their car comes in to pit. It's a tough job to land, but it sure would be one hell of an interesting career.

MORE: How to Become a NASCAR Driver, From Racing School to Sponsorships