If you're a NASCAR fan, then you're probably familiar with the three scariest words in NASCAR: "the Big One." A chain-reaction crash that involves six or more cars, the terrifying phenomenon known as "the Big One" typically happens at Daytona International Speedway and Talladega Supespeedway. So, when NASCAR heads to Daytona this weekend for the Coke Zero Sugar 400, you can expect plenty of spinning out, sparks, and caution flags.

Aric Almirola has been racing in NASCAR's highest level for the past 15 years, and he's been in his fair share of wild and terrifying crashes. In fact, his massive wreck at Kansas Speedway back in 2017 had all the makings of a career-ender. But, Almirola was able to recover from his spinal fracture, and five years later, he's still going strong. Being haunted by wrecks past and racing tentatively as a result isn't in Almirola's DNA. He knows "the Big One" is coming at Daytona. He's just hoping to avoid it.

"You know there's gonna be a big wreck," Almirola told the Daytona Beach News-Journal. "That is not a question that we ask ourselves. We're not, 'Oh man, I wonder if they're gonna wreck or not.' We know they're gonna wreck. It's a matter of when and where are they gonna wreck, and so you do all you can to put yourself in the best position."

"Typically, you want to be leading the race. It's the safest place. But you can still wreck from the lead; I've done it." 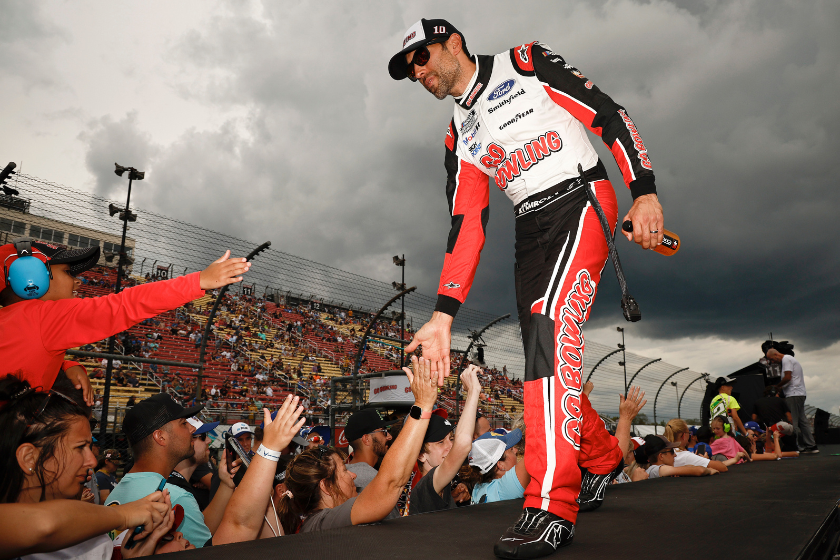 The 38-year-old Almirola, who recently announced he would be returning to Stewart-Haas Racing in 2023 despite claims back in January that his retirement was imminent, needs a win to make the playoffs this year. That means he'll be racing hard at one of the two tracks where racing hard can spell disaster if you also don't race smart. It's a scary prospect to put it all on the line at Daytona, but Almirola is up for the challenge. Even still, he knows what it looks like for an outsider looking in to see NASCAR drivers racing with seeming reckless abandon when complete chaos is pretty much guaranteed.

"We all have a little bit of a screw loose, maybe a couple screws loose, to do that," Almirola said. "Knowing that the income is most likely we're going to wreck. You feel a little bit like a kamikaze pilot. You just kinda strap in, pull your belts tight, and you go for it."

MORE: Aric Almirola Took Out 4 Drivers When He Triggered "The Big One" at Last Year's Bristol Dirt Race