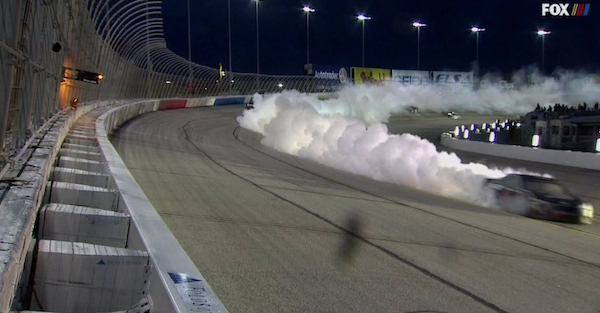 After an impressive second place finish last week at Daytona, Bubba Wallace instantly became a fan favorite, and he had high expectations entering Atlanta and for the rest of the season.

Wallace struggled for most of Sunday’s race at Atlanta, and he was involved in a crash with Ricky Stenhouse Jr. with less than 30 laps to go.

The wreck happened because of an issue with Trevor Bayne’s car. Bayne’s car left a massive trail of smoke behind him, which made it nearly impossible for drivers to see.

That led to Wallace making contact with Stenhouse, and it left a lot of damage to the front of Wallace’s car.

Related: Bubba Wallace can?t keep it together after an emotional Daytona 500

The smoke from Bayne’s car led to a caution flag, which changed the strategy for drivers competing for the win. Kevin Harvick, Brad Keselowski, Clint Bowyer, Denny Hamlin and Joey Logano were all vying for the lead when the caution came out.