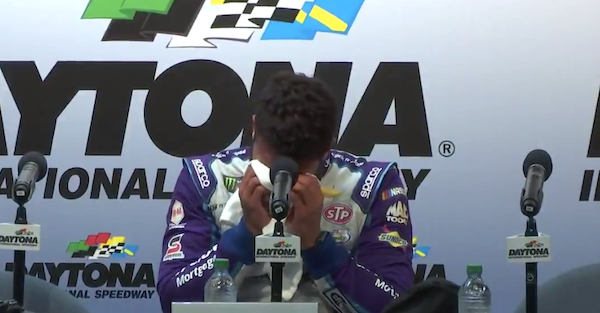 In only his fifth career Cup Series start and his first at the Daytona 500, Bubba Wallace finished second.

It was an emotional race and emotional week for Wallace, and his second place finish was the highest of any African-American in the history of the Daytona 500. Several members of Wallace’s family were in attendance to watch him make history, and he was understandably overwhelmed with emotion following the race.

“It’s a sensitive subject,” Wallace said via Motorsport. “But I’m just so emotional over where my family has been the last two years, and I don’t talk about it, but it’s just so hard, and so having them here to support me is ? pull it together, bud, pull it together ? you just finished second. It’s awesome.

“I just try so hard to be successful at everything I do, and my family pushes me each and every day, and they might not even know it, but I just want to make them proud. Second is horrible, but it’s still a good day.”

Related: Bubba Wallace has a high profile fan rooting for him

Here’s an emotional Wallace after the race:

The emotions came pouring out after a P2 finish for @BubbaWallace.#DAYTONA500 pic.twitter.com/QspZyBm0TM

Wallace earned the attention and respect of fans and drivers throughout the sport, including Dale Earnhardt Jr.

Congrats to @BubbaWallace on finishing an impressive 2nd place today. Bubba carried a ton of weight on his shoulders the last 10 days. Media responsibilities that smothered him personally. But he handled it like a veteran.

Wallace has improved his finish in each of his five starts, and if his performance at the Daytona 500 was any indication, it won’t be long before he makes his way into Victory Lane.

Wallace has the pressure on him driving the No. 43 car for Richard Petty Motorsports, but he’s proven he can handle the pressure and adversity on and off the track.