Chase Elliott was all sorts of frazzled, turned around, and mixed up after the Cup Series race at Watkins Glen last week, so much so that he actually forgot the venue for the August 28 race.

"Looking forward to going to Bristol next week," Elliott said during the post-race media press conference.

Obviously, Elliott meant to say Daytona, but it took another Bristol reference before Elliott eventually corrected himself. It's safe to say that Elliott's egregious error primarily stemmed from his frustration over the fact that his Hendrick Motorsports teammate Kyle Larson bumped him to ultimately get the Go Bowling at the Glen victory. While Elliott was clearly miffed by how things turned out, he insists that he and Larson are good. Revenge is ostensibly off the table.

"I would just say that there's nothing to be fixed," Elliott told reporters on Wednesday. "Really at the end of the day, when you look at the reality of the situation...we finished fourth and we weren't good enough to win. That's really what it comes down, just need to be faster, need to do a better job finishing off the races. For me, I don't see where there's anything that needs to be fixed."

Elliott may really have no hard feelings for Larson, but fans and pundits can't helped but notice that both of Larson's wins have come at Elliott's expense. At the Auto Club Speedway race back in February, Larson also made contact with Elliott to secure the victory. And then there's the whole Bristol thing. Now, Elliott is probably thinking ahead to Bristol because the Bass Pro Shops NRA Night Race is the final race before the first race of playoff eliminations. Currently ranked first-place in the standings, Elliott doesn't need to worry about Daytona. He's looking at where he'll stand when the Round of 16 gets whittled down to the Round of 12. Right now, Elliott is the man to beat. But Larson and his No. 5 Chevy are closing in.

According to NASCAR spotter Brett Griffin, Elliott's racetrack mix-up at Watkins Glen shows that the pressure over vying for the number-one spot at Hendrick may be getting to him.

"I think Hendricks are at a unique spot here, where they got two number ones and how they fight it out," Griffin said during a recent podcast appearance. "I mean look, Chase Elliott was so f***ed up in the head, over what happened, he got out and he said he's going to the next race at Bristol. So not only did he choose the wrong lane, screwed up the restart, and choke going from second to fifth, he got out of the car didn't even know where the race is next week." 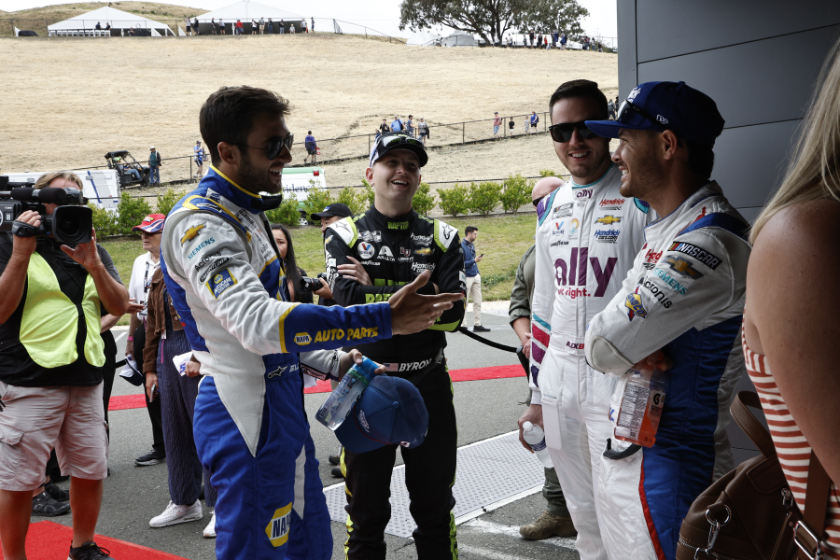 Things will be interesting for Hendrick Motorsports come September, as the team has all four cars in the playoffs for the second year in a row. That leaves an important question for Chase Elliott: how is he supposed to race Larson, Alex Bowman, and William Byron in the coming races?

"I think that's a tough one," Elliott said. "It's kind of above me, I feel like. I'm not really the one to make those kind of calls. The boss spends a lot of money doing this stuff, and I think we probably should respect however he wants us to approach that, whatever that answer would be. If all four of us make it to Phoenix, that would be a great problem to have and one any organization would be happy to be in."

Given how Kyle Larson has performed in the playoffs recently (he won five races on the way to the title last year), Elliott will definitely have his work cut out for him. And, if the driver of the No. 9 hopes to win his second Cup championship, he will have probably have to take a page out of Larson's book and race to win, even if that means wrecking his teammate in the process. I'm sure Larson would understand.