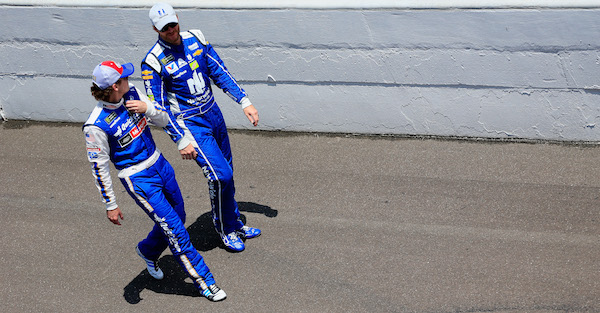 Dale Earnhardt Jr. might not be racing anymore, but he’s still very much involved in the NASCAR Cup Series.

In addition to serving as the grand marshal at the Daytona 500, Earnhardt gave Ryan Blaney a call a couple of days before the race.

The phone call had nothing to do with Blaney heading into Sunday. Instead, Earnhardt was actually concerned about Blaney’s good friend Bubba Wallace. Dale Jr. was concerned about Wallace since he had so much pressure on him as the first full-time African-American driver in NASCAR in several decades.

“(Earnhardt) was like, ‘Hey, I need you to go call Bubba (Wallace) and calm him down,” Blaney said. “Because I think (Wallace) was getting really overwhelmed with all the media and the pressure that was being bestowed upon him, and we hadn’t even gotten started yet.

“Wallace and I had a little bit of a talk ? not really a talk, just trying to relax him and tell him that he deserves to be here.”

Related: Bubba Wallace reveals what he said to Denny Hamlin after on-track incident at the Daytona 500

Blaney said it’s a good thing for Wallace and for NASCAR that he’s being recognized throughout the sport both before and after his performance at Daytona.

“Don’t see it as pressure, see it as a well deserved opportunity,” Blaney said. “I think he dealt with it really well. He proved that Sunday when he was able to put all this behind him and just go out there and race.”

Blaney said he didn’t think Wallace could’ve handled the pressure a few years ago, but he’s matured a lot and was ready for the challenges of being a full-time Cup Series driver.

Here’s Blaney telling the story of getting the call from Earnhardt, and he discusses how well he thought Wallace handled Daytona.