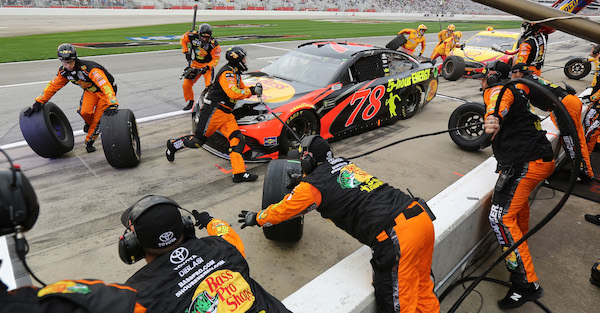 Truex’s crew chief, Cole Pearn, cut straight to the point when describing his feelings towards the mandatory pit guns.

Truex’s team went through three pit guns during the race at Atlanta Motor Speedway before finding one that worked adequately. Pearn said NASCAR officials gave them something that was “like the old spec guns or something, so it was a hunk of garbage. And we used it the next stop, and it was basically unusable. Then they got us a newer gun after that that was fine.”

Related: Kevin Harvick calls out his pit crew after they got sloppy and blew the race for him

Truex wasn’t the only driver affected by the new pit guns.

Kevin Harvick, Alex Bowman and Kyle Busch all had issues. Harvick went on to win the race despite having early problems on pit road.

NASCAR decided to introduce the new pit guns to lower costs for teams. The pit guns teams used last season cost more because they were more highly specialized. Senior vice president Steve O’Donnell said there will be some kinks to work out early on, but NASCAR officials will look into the issues from Sunday’s race in Atlanta.

Teams are also working with one less pit crew member than previous years due to another NASCAR rule change, so there will be an adjustment period for teams during the early races this season.