The 2008 Lenox Industrial Tools 301 started off strong, but ended up being a complete dud of a race.

Held at New Hampshire Motor Speedway, the 17th event of the 2008 NASCAR Sprint Cup season ended with 17 laps to go due to rain, a sad turn of events considering the excitement leading up to the eventual cancellation.

Despite the disappointing finish, this race will go down in the history books for a completely different reason involving a monkey, a can of Coors Light, and dozens of fired-up NASCAR fans.

The NASCAR RaceDay show ahead of the June 29th Cup race at NHMS started off like normal, with the broadcasting crew of John Roberts, Jimmy Spencer, and Kenny Wallace offering their usual pre-race coverage and analysis.

Wallace was in the middle of making a serious point following the then-recent news that Tony Stewart would be the part owner at Haas CNC (today, Stewart co-owns Stewart-Haas Racing alongside Gene Haas). Unfortunately, Wallace couldn't keep the crowd's attention, as they had just witnessed something way, way more compelling: an living, breathing monkey drinking from a can of Coors Light while perched on a man's shoulder.

The excited roars from the crowd drowned out Wallace's analysis, and eventually the NASCAR RaceDay crew had to address to the viewers at home what all the hubbub was about. Sadly, the monkey got camera shy, and wasn't able to recreate its beer-drinking feat once the camera panned over, but the whole hysteria surrounding the scene still made for a hilarious pre-race moment.

This wild incident probably would have derailed most pre-race shows, but Roberts was able to bring things back around to Stewart when he mentioned the fact that the three-time Cup champion actually used to own a pet monkey. Now that is what we in the business call a 10-out-of-10 segue. 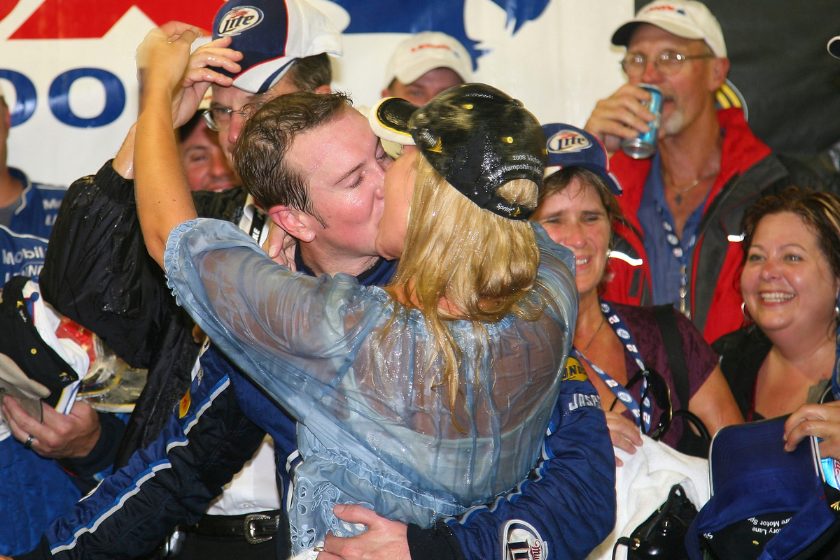 Had it not anti-climatically been cancelled because of weather, the 2008 Lenox Industrial Tools 301 probably would've finished in an absolutely nailbiting fashion.

On lap 270, Jamie McMurray slammed into the rear of Dale Earnhardt Jr. while he was entering pit road. During the ensuing caution period, Tony Stewart, Jeff Gordon, Denny Hamlin, and Jimmie Johnson -- a group that had led the pack at that point -- decided to pit to refuel and get fresh tires. This pretty much made it anyone's game at that point in the race.

Ten laps later, the seventh and final caution was brought out after Sam Hornish Jr. and Clint Bowyer wrecked. Juan Pablo Montoya took advantage of the caution period by intentionally spinning Kyle Busch out down the frontstretch in retaliation over what Montoya deemed to be overly aggressive driving on Busch's part. Montoya was penalized two laps for aggressive driving and ultimately credited with a 32nd-place finish.

Despite all the excitement heading into the race's final laps, it was eventually called on lap 284, 17 laps shy of the scheduled 301, due to a severe thunderstorm that wouldn't let up.

Kurt Busch won the race, while Michael Waltrip's second-place finish marked his best since he won the the fall race at Talladega Superspeedway in 2003. Meanwhile, Jimmie Johnson placed ninth, racking up yet another top-10 finish on the way to his third championship win months later.

MORE: Brad Keselowski Drank a Huge Beer and Got Wasted on Live TV After Winning the 2012 Cup Title