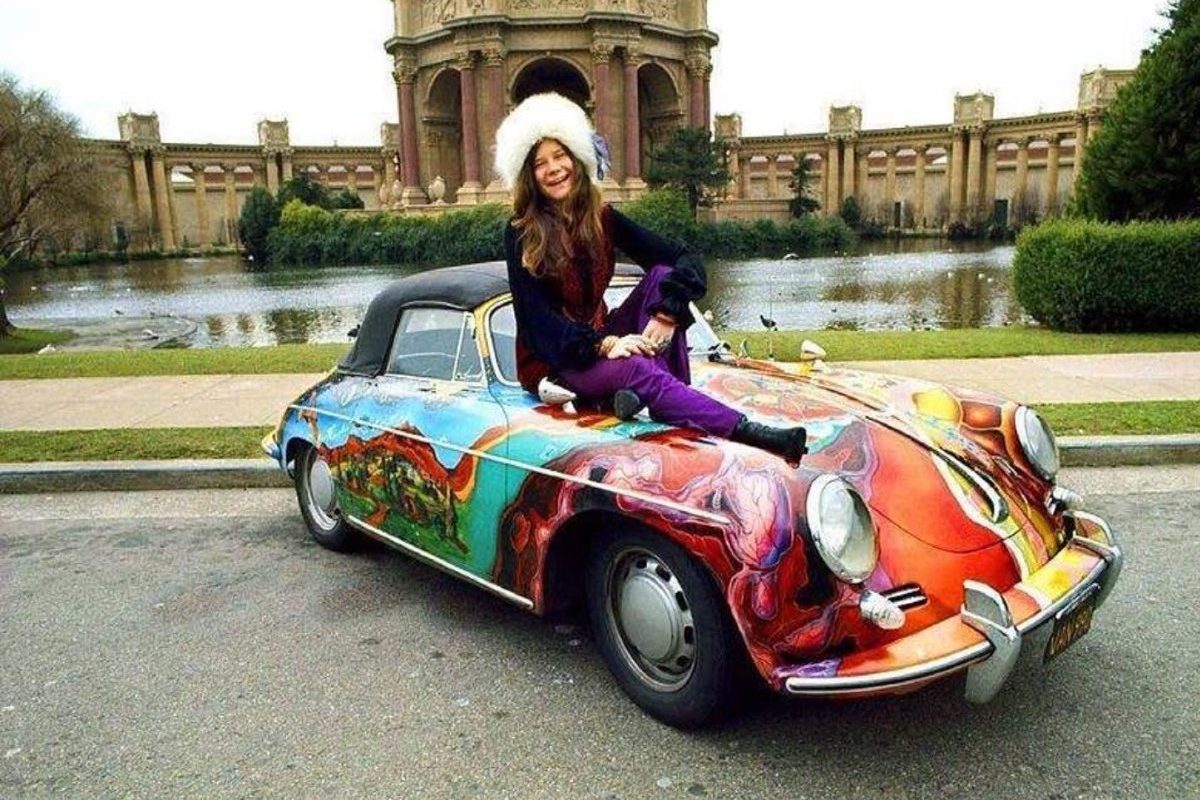 If there were ever a car to perfectly match Janis Joplin’s unique personality, it was without a doubt her Porsche 356c Cabriolet.

With the money she was making at the time, the rock singer could have bought herself some expensive Ferrari, Mercedes-Benz, or pretty much any vehicle she wanted. Instead, she opted for something one of a kind.

Here’s a look at one of the most iconic vehicles in the history of rock and roll.

In 1968, Joplin picked up a used ’65 Porsche 356c with a white paint job for $3,500. It didn’t take too long before she wanted to spice things up, so she recruited one of her roadies, Dave Roberts, to give the vehicle an all-new custom paint job. It took around a month to fully complete Joplin’s car, but when it was done, it was a true masterpiece. Roberts called the finished paint job “the history of the universe,” and this colorful artwork was quick to draw attention.

Janis loved the car so much that she was actually using it as her daily driver, so it became highly recognized in the San Francisco, California area. Her fans realized it was her vehicle, so she’d find letters and notes left under her windshield wipers nearly every time she went somewhere. In a surprising move, considering how well-known the car was, a thief actually ended up stealing the car in 1969, and they tried painting over the psychedelic colors to make it less noticeable. Unfortunately for them, the car was recovered by police before they could finish painting it.

Amazingly, with a little help from a body shop, they were able to remove the paint from the clear coat and save the original artwork. Following Janis Joplin’s death in 1970, the car was used by her manager Albert Grossman as a courtesy car. After a while, the vehicle began to exhibit cosmetic and mechanical issues, so it was taken by Janis’s brother, Michael Joplin. He managed to restore this car back to original condition, but he also repainted it to a solid gray color.

It wasn’t until the 1990s that Joplin’s siblings, Michael and Laura Joplin, finally brought the rock star’s Porsche back to its former glory. They contacted talented artists Amber Owen and Jana Mitchell to properly replicate the original artwork, and they did a flawless job once it was finished. In ’95, the car was loaned to the Rock and Roll Hall of Fame and Museum for all to see in person. However, in 2015, Janis Joplin’s psychedelic Porsche was finally put up for auction at the “Driven by Disruption” sale in New York City. It brought a whopping $1.76 million, making it the highest selling Porsche 356 at a public auction.

Although the buyer was not named, it’s rumored that a 60-year-old woman bought the car for her birthday.

Janis Joplin and her band Big Brother and the Holding Company saw tremendous success over the years, so it’s awesome that some lucky fan now owns this car in perfect condition as tribute. I’m sure it’ll be well taken care of!