While he just missed out on an opportunity to clinch a spot in the Championship 4, Ross Chastain was pretty pleased with his second-place performance at last weekend's race at Homestead-Miami Speedway and was particularly praiseworthy of his team for the closing the gap with some efficient pit stops down the stretch. Now, the 29-year-old driver of the No. 1 Chevy for Trackhouse Racing will have the chance to get it done when the NASCAR Cup Series heads to Martinsville Speedway for the Xfinity 500.

When asked about his comfort level heading into Martinsville during the post-race interview, Chastain started out pretty boilerplate. Considering he's never been this close to making a Cup championship run before, Chastain isn't really sure what to expect.

"I don't know," Chastain said. "What's it supposed to feel like? I've never been here. For Trackhouse, we're learning all this together; we're experiencing this together."

"We've got a lot of knowledge in our shop, and I'll lean on a lot of teammates, both in the GM camp and inside our shop of how to approach it, but I'm a racer. We're just going to race. Go practice as well as we can; we'll go qualify as best we can."

Chastain did manage to save his otherwise boring interview with a "timely" joke referencing one of NASCAR's most popular trophies. For decades now, it's been a tradition for winners of the NASCAR Cup Series, Truck Series, and Whelen Modified events at Martinsville to receive a grandfather clock as a trophy. The seven-foot-tall trophy is painstakingly crafted by clockmakers in Michigan, and with a price tag of over $10,000, it would probably be more appropriately housed in a museum rather than someone's living room. But, according to Chastain, victory at Martinsville would do serve him well in one pretty practical area.

"I'm late all the time, so a grandfather clock might do me a little good for the rest of my life," Chastain said. 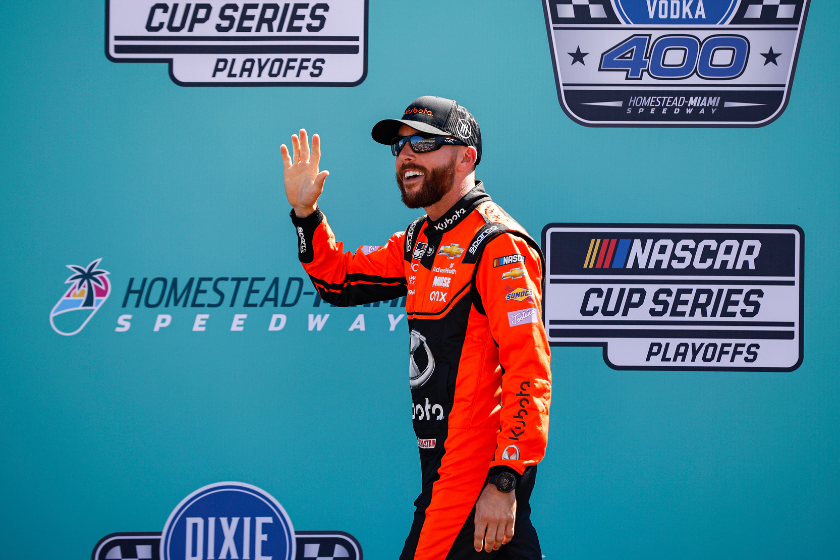 All jokes asides, Ross realizes that he has a target on his back, and I'm not talking about the one put there by the other drivers he pissed off earlier in the season who are looking to take revenge. The other target is one of expectation, as there are plenty of folks who are betting on Chastain's successful championship run. For Chastain himself, he's just happy to be competing in NASCAR's highest level.

"(To race for a championship is) just a life goal, a career accomplishment, " Chastain said. "Just to make it to the Cup Series, be here competing with my heroes. I train with Kyle, and he was better than us today. But he ran into the 19, knocked his diffuser flap down and he didn't have quite as much grip, and we had a shot at it.

"I feel like that no matter what, this season is going to be a success, but in the moments where I hit the wall at the Roval and I realized this could all be gone and we could not transfer, it hurts, and I don't want that. I'm a racer, and I want the next thing. I feel confident in our group and what we'll take to Martinsville. We ran fifth there in the spring. We just continue to arrive on the scene of the Cup Series, and I wouldn't want to be doing it with anybody else."