Tony Stewart may have retired from NASCAR back in 2016, but nowadays he's probably more involved in professional auto racing than he was even during the pinnacle of his career. He owns Eldora Speedway, a dirt track in Ohio. He owns not one, but two racing series: All Star Circuit of Champions and Superstar Racing Experience. On top of still being the co-owner of Stewart-Haas Racing -- which fields Kevin Harvick, Aric Almirola, Chase Briscoe, and Cole Custer in the Cup Series -- he also owns Tony Stewart Racing, which competes in the NHRA series. Obviously, the guy has been keeping busy.

A couple years back, NASCAR fans were buzzing with the rumor that Tony may have been eyeing a return to the sport. Now, he may make a one-race appearance sometime down the road, but his career as a full-time NASCAR driver is over and done with. His decision to ultimately hang it up for good probably wasn't an easy one, but it actually all stems from a promise he made to his dad when he was just a kid, which he revealed to Kyle Petty during an interview on the NBC Sports YouTube channel series "Coffee With Kyle" back in 2018.

"I got to where I was mad on Thursdays that I was leaving to go do what I was doing and I was like, 'this isn't right,'" Stewart said.

"My dad made me promise when I was eight years old when we started racing together, he said 'the day that you're not having fun doing this, promise me you'll stop.' And I think he meant if I was nine or ten or 11, but I never forgot that and I finally got to the point where I'm not having fun. Why am I doing this?"

Discussing his thoughts on the new generation of NASCAR drivers and his reputation as a hothead, Stewart also dished on his shifting perspectives on racing as he's gotten older.

"I've been at Eldora Speedway driving in my own car, in my own series that night at my own racetrack," the NASCAR and IndyCar icon said. "You get mad at somebody, where do you go? You just literally go to the mirror and look at each other."

"We've got one of those triple mirrors in our hauler in a small restroom. So I can look there and see three people, and it's like that's the best you can do is sit there and argue the point to yourself. I think that's what helped me be a better (team) owner, track owner, be a better series owner. Because if you as a driver come up to me after a race and have a point you're trying to make, I can understand it because I'm a driver, too." 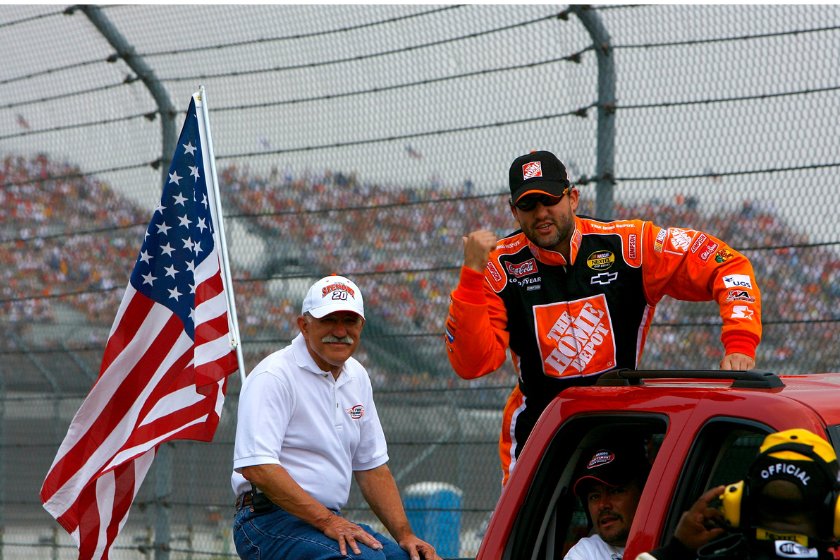 By the end of the 2015 NASCAR Sprint Cup Series season, Tony Stewart didn't have too much more to prove in the sport. He had already won three Cup championships and solidified himself as one of the most iconic drivers in NASCAR's modern era. So, in September 2015, Stewart announced that the 2016 season would be his last year in NASCAR, with Clint Bowyer replacing him in the No. 16 Chevrolet for SHR.

Unfortunately, Stewart's farewell season didn't end as gracefully as he probably would have liked. A couple weeks before the Daytona 500, Stewart injured his back in a dune buggy accident. He suffered a burst fracture in his lumbar vertebra, causing him to miss the first eight races of the season. Stewart made his return to competition for the April race at Richmond, where he placed 19th. Fast forward two months later to June and the Cup race at Sonoma. Stewart bided his time during the race, took advantage of a late caution, and thanks to a last-lap pass on Denny Hamlin, secured the victory. It would be his first win since the June Dover race back in 2013.

Coming off his win at Sonoma, Stewart would hit somewhat of a stride, with top-five performances at Kentucky, New Hampshire, Pocono, and Watkins Glen. But, of course, Stewart wasn't about to quit Cup racing for good without a little bit of controversy thrown in for good measure.

With 28 laps to go in the September race at Richmond, Stewart wrecked Ryan Newman, his former SHR teammate. This caused a five-car pileup and ended Newman's Chase for the Sprint Cup chances. Needless to say, the driver for Richard Childress Racing was pretty pissed.

"I guess he thought he was in a sprint car again and didn't know how to control his anger," Newman said in a post-race interview. It's disappointing that you have somebody who should be retired the way he drives. It's just ridiculous."

Stewart would struggle in his final 10 races, only cracking the top 10 once during that time. In the season-ending race at Homestead-Miami Speedway, and Stewart's career-ender, he placed 22nd. Despite Stewart's disappointing final season, 2016 wouldn't be all bad for the Columbus, Indiana native. Ahead of that year's Brickyard 400, Stewart was inducted into the United States Auto Club Hall of Fame. A real honor, no doubt, as it showed all that he had accomplished in the USAC, which included being the first driver to win all three of USAC National championships in a single season and being one of only six USAC Triple Crown champions.

Yet, Stewart's ultimate hall of fame induction came in 2020, when he was inducted into the NASCAR Hall of Fame. A true testament to everything he has accomplished in the sport. And while he will probably never again step foot inside a stock car at the Cup level, you can bet that he still has plenty more he wants to do in NASCAR, even if it's not behind the wheel.