Sardar Azmoun is an Iranian soccer player who debuted for his national team at the age of 19. Since then, he has been loved by fans of his home country and clubs for which he has played alike. Nearly the entirety of his professional career has been played in Russia, playing a significant number of games for both Rubin Kazan and Rostov. However he really took off while playing the last three seasons for Zenit Saint Petersburg. From 2019-2022, Azmoun played in nearly 80 matches and scored over 50 goals -- an incredible goalscoring record if you ask me. Enough so for him to seal a move to Germany and join Bayer Leverkusen.

But it's not all sunshine, roses, and goal for Sardar Azmoun. While the Iranian is looking to prepare for this year's World Cup in Qatar, his attention has also shifted to what is happening back home. 22-year-old Mahsa Amini died in custody in Tehran after being arrested for wearing her headscarf too loosely. While the government claims she died of heart failure, young Iranians and others across the world believe that she was killed by police.

Azmoun Lends His Voice to the Cause 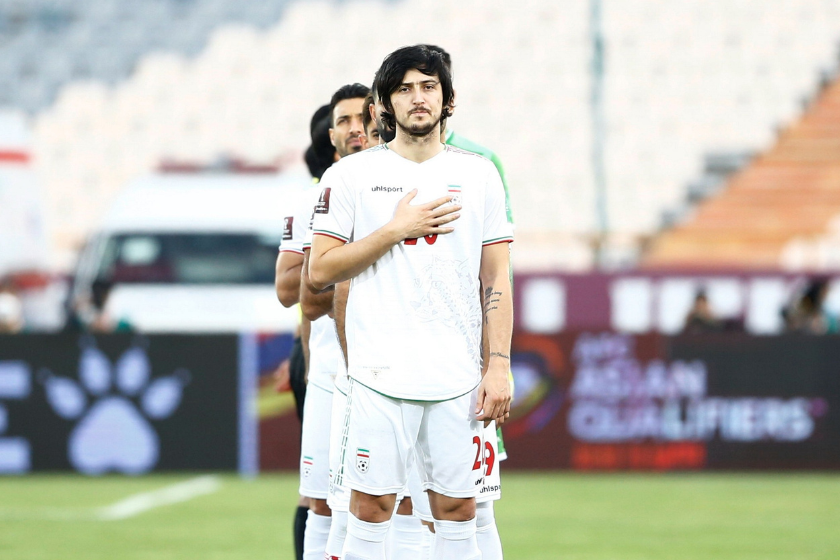 Even the United Nations have called for an independent investigation into the matter. Sadly, Amini is just one example of the many victims of Iran's so-called Morality Police. It is a clear and vicious attack on women.

And so, with this unrest erupting throughout Iran, and subsequently around the world, it's remarkable that a public figure such as Sardar Azmoun would speak up so firmly against the regime. This type of statement is not taken lightly by the Iranian Government and their Revolutionary Guard. They have been known to call for arrests of others who have done much of the same, such as former Bayern Munich player Ali Karimi.

But for Azmoun, it is a particularly delicate situation. We are just under two months away from the World Cup. A World Cup in which Team Melli has a legitimate chance to escape the group stages when they go up against England, Wales, and the United States. And as the rest of the team updated their social accounts in support of the protests, Azmoun took it a step further. And thus, has put himself and Iran's hopes of causing a stir at the World Cup in jeopardy.

"Due to the restrictive laws placed on us, we were told not to say anything. But I can't take it any longer. If this message causes the removal of my name from the [team] list, I'm okay with that. Look at what they're doing. This will never be erased from our consciousness. Shame on those who kill our people so easily. Long live the women of Iran." - Sadar Azmoun

It feels as though this year's FIFA World Cup is a social reckoning. Workers who were used to build stadiums in Qatar, a country that quite clearly bribed its way into hosting the World Cup, were mistreated to the extent of being considered human rights violations. Saudi Arabia has also been called out for human rights violations, as prominently as being blamed for the murder of Saudi journalist Jamal Khashoggi.

Add the current situation in Iran to that list, and there's a lot on the table this winter. Berlin hosted the Summer Olympics in 1936, amid the rise of the Nazi regime. The world watched as it pretended we could be civilized. But, in reality, a blind eye was being turned to what was ultimately the cusp of a horrendous attack on humankkind.

Today, we risk doing the same thing in Qatar in November. It's the courage of players like Azmoun and the protesters across Iran and the rest of the world that should help to not just change the narrative, but actually inspire change. I want to watch this winter knowing that the world is coming together to stamp out atrocities like what happened to Mahsa Amini and so many others. But we have a long way to go if that's going to be a reality.