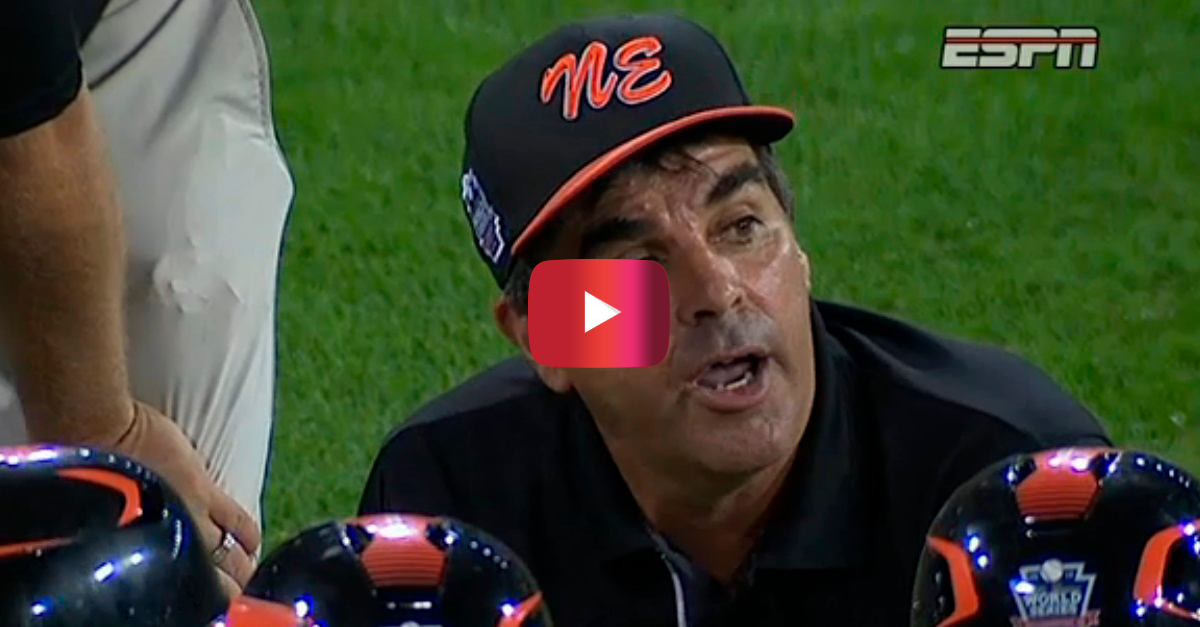 Coach Dave Belisle of the Cumberland American Little League team from Rhode Island had just witnessed his players cough up an elimination game late to Chicago’s Jackie Robinson West team, losing by the slim margin of 8-7.

Belisle understood what he had to do when he saw long faces, watery eyes and heads down and he absolutely knocked it out of the park, as evidenced by the attention it got on ESPN’s 11 p.m. SportsCenter show.

Heads up high. Heads up high. I’ve gotta see your eyes, guys. There’s no disappointment in your effort — in the whole tournament, the whole season. It’s been an incredible journey. We fought. Look at the score – 8-7, 12-10 in hits. We came to the last out. We didn’t quit. That’s us! Boys, that’s us!

The lessons you guys have learned along the journey, you’re never going to forget. We’re going to have some more fun. We have two more days of fun. When you walk around this ballpark in the next couple of days, they’re going to look at you and say:

It’s OK to cry, because we’re not going to play baseball together any more. But we’re going to be friends forever. Friends forever. Our Little League careers have ended on the most positive note that could ever be. OK? Ever be.

There’s only going to be one team that’s going to walk out of here as World Series champions. Only one. We got down to the nitty-gritty. We’re one of the best teams in the world. Think about that for a second. In the world! Right?

I love you guys. I’m gonna love you forever. You’ve given me the most precious moment in my athletic and coaching career, and I’ve been coaching a long time – a looooong time. I’m getting to be an old man. I need memories like this, I need kids like this. You’re all my boys. You’re the boys of summer.

So, for the last time, we’re going to yell Americans: One, two three – Americans!