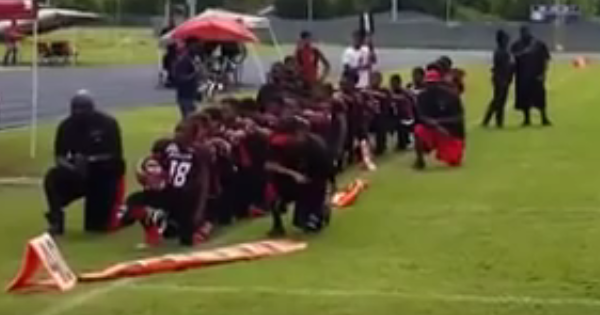 All across the country, teams and individual players are protesting what they believe is unjust treatment of African Americans at the hands of police by taking a knee during the national anthem.

The Beaumont Bears, a youth football team in Texas participated in the protest, but now its season is over, and the circumstances are ugly, punctuated by racially charged allegations and a bunch of he said-she said.

RELATED: Colin Kaepernick fires back at his critics

The background: The Beaumont Enterprise reported the Bears, comprised of 11 and 12-year-old players, took a knee during the anthem on September 10. The report says the team’s head coach, Rah-Rah Barber, pressured players to participate in the protest during the September 17 game. He was subsequently suspended by the Bay Area Football league — the league that oversees the team — and after that, the team fell apart. Barber, in the newspaper report, said some players were upset that he was suspended; others claim they were upset because of the protest. Regardless, players started dropping off the team, and it eventually didn’t have enough players to participate in games.

All the while, the situation became progressively worse. There are conflicting reports on whether the league ordered some coaches and parents to stay away from practices and games under threat of arrest. The team’s president said she’s received hate mail from all over the world. Fox News, in the video above, reported players and coaches received death treats, and this despicable message appeared on social media: