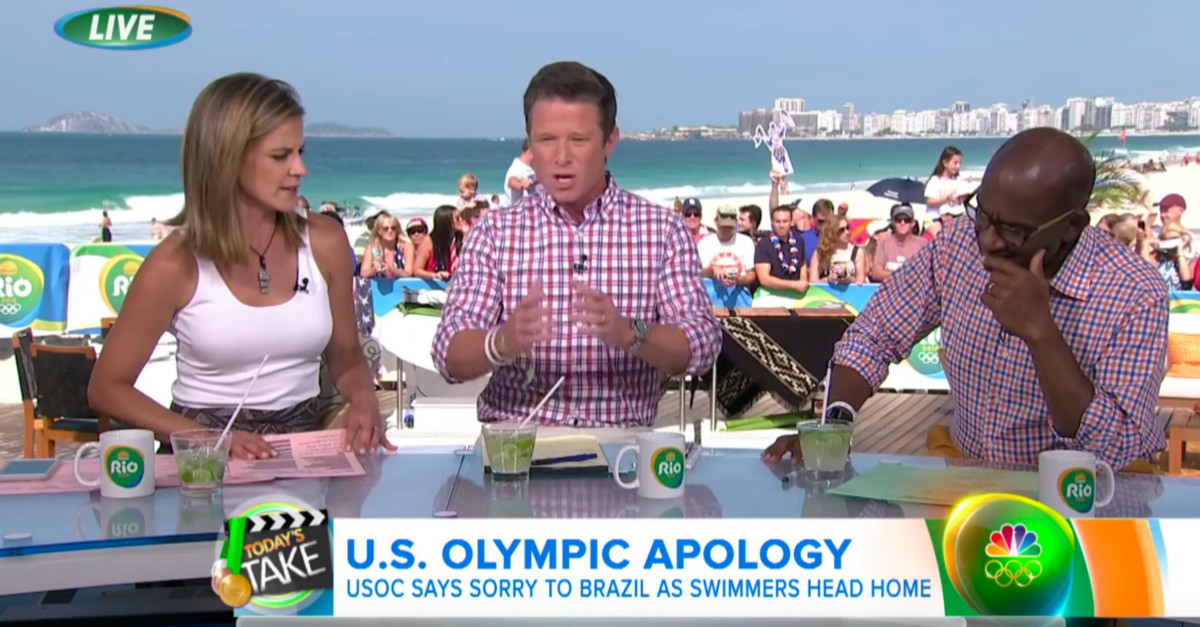 During an on-air discussion with colleagues Natalie Morales and Billy Bush, Al Roker lit into Olympic medalist Ryan Lochte for his lofty robbery accusations at this year’s games in Rio de Janeiro, Brazil.

?He lied. He lied to you (Bush), he lied to Matt Lauer, he lied to his mom, he left his teammates hanging and he skedaddled,? Roker said. ?He lied!?

Lochte finally owned up to his misbehavior during an interview with Matt Lauer over the weekend. The full clip will air during Monday morning’s segment of the “Today” Show.

?I?m taking full responsibility,? Lochte said. ?I over-exaggerated that story. If I hadn?t done that we wouldn?t be in this mess. None of this would have happened. It was my immature behavior.?

Bush seemed more amenable to viewing things from Lochte’s point of view, but Roker was absolutely not having it.

Bush’s response was for Roker to “calm down,” which made the NBC weather anchor even more visibly annoyed.

As Bush clarified his semi-defense of Lochte’s behavior, Roker’s patience had run so thin that with an expression of disbelief he picked up the straw in his delightful beachside cocktail and sassily stirred his drink.

Roker’s angry stir quickly became synonymous with the frustration many people felt over the “boys will be boys” pity Lochte appeared to be receiving from many media outlets and talking heads.

Al Roker stirring his drink and shaking his head is the best https://t.co/dWO8C9IBlo

Al Roker was keeping it real on NBC. Much respect for calling out that entitlement https://t.co/jHDhZtYlET