A moment of silence at a sporting event, designed to honor terror victims, takes a controversial turn 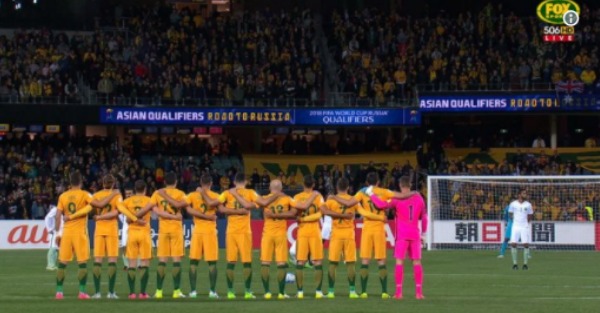 The qualifier was held in Australia, and the Australian team had a moment of silence before the game to honor two Australians killed in the London terror attacks.

However the Saudi team told the Football Federation of Australia (FFA) it wouldn’t be participating . This, from News.com.au, an Australian publication:

?The FFA was further advised by Saudi team officials that this tradition (A moment of silence) was not in keeping with Saudi culture and they would move to their side of the field and respect our custom whilst taking their own positions on the field.? The news site also noted, “Most of the Saudi Arabian side are Muslim and the custom of pausing for a moment silence to (honor) the dead is not common under Islam. Instead, it is custom to pray for the dead, give to charity on their behalf and remember.”

So while the Australian team locked arms, the Saudi team kept warming up.

That didn’t sit well with the Australian fans. Some in the crowd booed, and others took to Twitter.

That is just before it started, however, Hawsawi – the captain – continued to stretch and jog on spot during the minute.
Not cool. https://t.co/L09te9XgTf