ESPN analyst to Colin Kaepernick: His job is to “be quiet, and sit in the shadows” 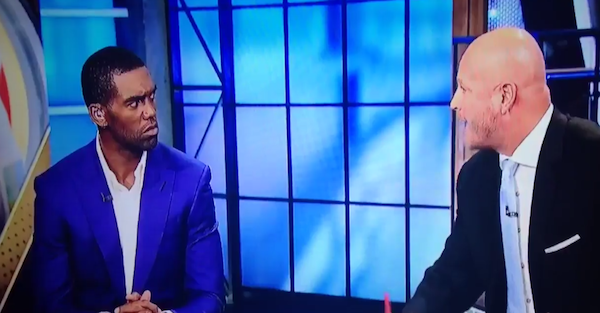 Reactions from media members against Colin Kaepernick’s movement to sit or kneel during the national anthem have ranged all over the place. But Sunday, before games kicked off on the 15th anniversary of 9/11, ESPN discussed the topics with two former NFL players taking starkly different perspectives.

Related: While the Seahawks linked arms, Arian Foster and the Dolphins knelt during the national anthem

To Trent Dilfer’s completely opposite response, per BroBible:

?The big thing that hit me through all this was this is a backup quarterback whose job is to be quiet, and sit in the shadows and get the starter ready to play Week 1.

?Yet he chose a time where all of a sudden he became the center of attention. And it has disrupted that organization. It has caused friction. And it?s torn at the fabric of the team.?

While Dilfer discussed the topic, Moss couldn’t help but show his emotion on his face.

There’s no question this will continue to be a tense topic moving forward.