Finally! Video from the night of the Ryan Lochte “robbery” has been released 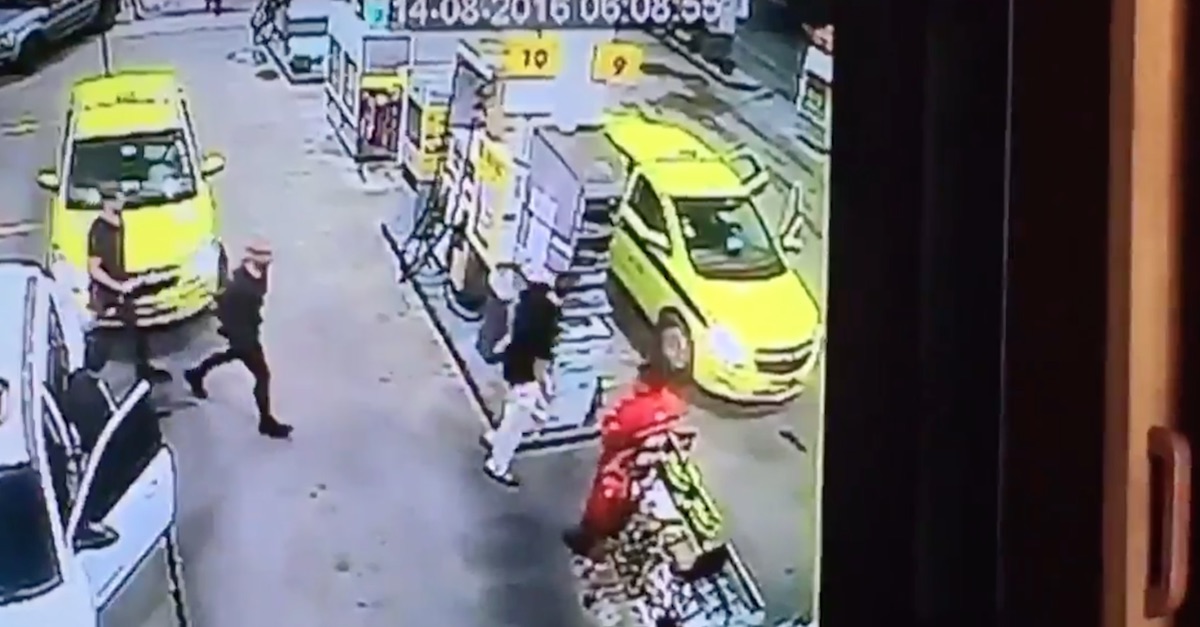 This story has unfolded oddly since it broke Sunday. First, Lochte’s mom told news outlets that her son was robbed. Then, the International Olympic Committee (IOC) said news of the incident was “absolutely not true.” Next, Lochte did a beach interview with NBC’s Billy Bush and said a gun was cocked that night and pointed at his forehead, and that armed men posing as police were the culprits.

He also said the men robbed him and his teammates.

“And then the guy pulled out his gun, he cocked it, put it to my forehead and he said: ‘Get down,’ and I put my hands up, I was like ‘Whatever,'” Lochte said. “He took our money, he took my wallet. He left my cell phone, he left my credentials.”

Late Wednesday night, Conger and Bentz were prevented from leaving Brazil on a plane and asked to surrender their passports after a Brazilian judge saw some discrepancies in the robbery story.

Today, Brazilian authorities say the story was fabricated to cover up an incident at the gas station originally said to be the scene of the crime.

Security footage the first aired on Globo TV in Brazil shows the swimmers leaving the gas station in a rush.

According to Globo, an armed security guard tried to prevent the swimmers from leaving the site. As if the story couldn’t get any stranger, Lochte and co. reportedly damaged a bathroom at the gas station and peed on the walls before attempting to leave in a taxi.

Here’s an excerpt of Globo’s report:

Then the swimmers went to the taxi, but the taxi driver obeyed the order of safety to await the arrival of the police. Police arrived to be triggered, as long in coming, the swimmers were aggressive and security would have pointed the gun to prevent them leave the site. It would have been done, then an agreement so that the swimmers pay for the damage.

Lochte is the only one of the swimmers who is back in the United States.

RELATED: Brazilian police say that Ryan Lochte and his fellow swimmers made up their story about being robbed at gunpoint

A Brazilian police official, who has direct knowledge of the investigation, spoke on the condition of anonymity because he was not authorized to speak about an ongoing probe.

He said that around 6 a.m. on Sunday, Lochte, along with fellow swimmers Jack Conger, Gunnar Bentz and Jimmy Feigen, stopped at a gas station in Barra da Tijuca, a suburb of Rio where many Olympic venues are located. One of the swimmers tried but failed to open the door of an outside bathroom.

A few of the swimmers then pushed on the door and broke it. A security guard appeared and confronted them, the official said.

The official says the guard was armed with a pistol, but he never took it out or pointed it at the swimmers.

According to the official, the gas station manager then arrived. Using a customer to translate, the manager asked the swimmers to pay for the broken door. After a discussion, they did pay him an unknown amount of money and then left.

The official says that swimmers Conger and Bentz, who were pulled off a plane going back to the United States late Wednesday, told police that the robbery story had been fabricated.

Lochte first lied about the robbery to his mother, Ileana Lochte, who spoke with reporters, the police official said. That led to news coverage of the incident and prompted police attention.

A police news conference was scheduled for Thursday afternoon.

Lochte’s lawyer, agent and father did not immediately return messages seeking comment from the AP.

“All are represented by counsel and being appropriately supported by the USOC and the U.S. Consulate in Rio,” Sandusky said.

Mario Andrada, a spokesman for the Rio organizers, said he was glad the facts about the case emerged.

“Everybody saw and the story turned around. So we are obviously relieved,” Andrada said. “And we might even make internal jokes about the fact. It’s so clearly obvious that we had done nothing wrong in that particular case.”

Right now people on social media are having a field day with the story.

Exclusive video of Ryan Lochte & company on their way to the gas station where the alleged brawl took place pic.twitter.com/Zti9eU9ij5

It's a little grainy, but I've obtained video of Lochte and his friends at the gas station in Rio. pic.twitter.com/DNtp9Zz5y7

EXCLUSIVE: Video of Ryan Lochte and his friends fighting security at a Rio gas station pic.twitter.com/Td9zy9uOnv

Footage of Ryan Lochte getting robbed at the gas station in Rio pic.twitter.com/BvrNwK9z9w

One thing is for certain: this is a really embarrassing turn of events.

The Associated Press contributed to this report.