Ben Joyce reared back and delivered: 102.

This was an actual sequence of pitches the Tennessee Volunteers relief pitcher threw against South Carolina's Jalen Vasquez, who may as well not have even gone up with a bat in the first place.

That 104 mark is rumored to be the fastest pitch ever recorded in a college baseball game, and it couldn't have come from an unlikelier candidate.

After spending all of 2021 recuperating after Tommy John surgery on his elbow, Joyce has been pushing radar guns to their limits by routinely hitting triple digits. In the process, "The Volunteer Fireman" has become the most talked-about flamethrower in the NCAA -- and maybe all of organized baseball. 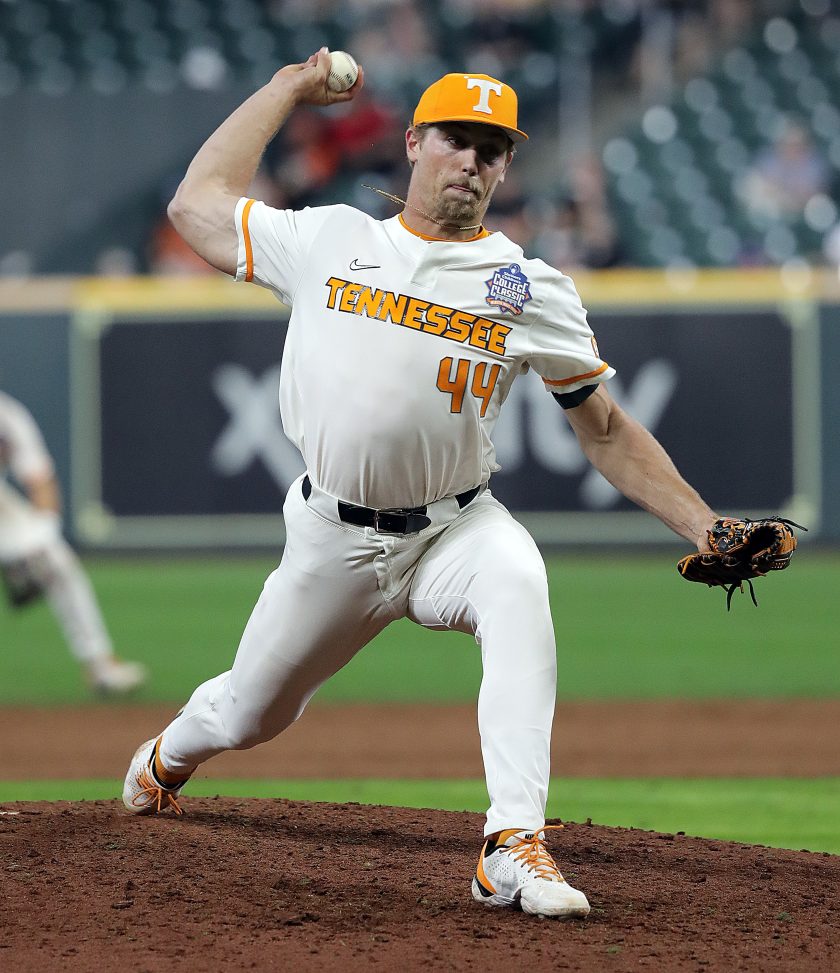 The part that baffles me about Ben Joyce's story is that he was doing similar things with a baseball in his hand in high school, so why wasn't he drafted?

Maybe it was the fact that he grew eight inches the summer before his senior year. The late bloomer was off everyone's radars, and soon he would be lighting up their radar guns.

According to Perfect Game, he once threw a 100 mph fastball while pitching at Farragut High School in Knoxville. Still, he was only rated the No. 81 player in the state and No. 29 among right-handed pitchers in Tennessee. What other teenagers were throwing 100?

Joyce signed with Walters State Community College in 2020. He wasn't entirely dominant -- he posted a 4.79 ERA -- but he did strike out 35 hitters in 20.2 innings. He announced he'd be continuing his college baseball career at the University of Tennessee in September 2020.

However, in October 2020, Joyce went through a pitcher's worst nightmare.

All the heat must've worn on Joyce's right elbow.

He received Tommy John surgery in 2020 and spent all of 2021 rehabbing and working his way back onto the mound. Of course, there's always uncertainty if a player will look the same after that long road. According to the Cleveland Clinic, some 80-83 percent of professional baseball players return to the same level of performance after the surgery. It's even less -- 70-73 percent -- for high school players.

"The whole staff was there every step of the way. Getting out there and pitching again was a really cool deal," he told reporters in February.

By the time Joyce took the mound this season throwing 100 mph heaters, the rest of the country collectively asked, "who the hell is this kid?"

He's a constant on the popular Twitter pitching account Pitching Ninja AKA Rob Friedman, who dubbed him "The Volunteer Fireman," which is just a terrific and fitting nickname.

Aside from the triple-digits fastball, the 6-foot-5 Joyce features a pretty nasty slider and a changeup he's been working on. If he masters both, hitters might as well just guess what's coming.

"That's been a big thing I've been working on with Coach Anderson. It's kind of a pitch we've tried to develop coming back from the Tommy John rehab," he told reporters in February. "So, I think I take more pride in the changeup."

And, it's 13 mph slower than his fastest pitch today.

Does Ben Joyce Have an MLB Future?

While he's not expected to be a first-round pick (for now), ProspectsLive ranks him 103rd on their 2022 MLB Draft prospect list. MLB.com doesn't have him on their top 100 list, but fellow Tennessee pitcher Blake Tidwell is on it.

Of course, Joyce does have a future in MLB. Anyone with a pulse would take a kid throwing 104 mph and try to develop him into the league's next great closer.

Since 2015, only four MLB pitchers have thrown a pitcher 104 mph or harder. Whether Ben Joyce can become the next Aroldis Chapman or Jordan Hicks likely depends on a few things: his work ethic, the development of his secondary pitches, and whether his arm can hold up. So far so good in 2022.

Ben Joyce will keep sitting down batters and making Vols fans go nuts. He'll turn his teammates and his head coach, Tony Vitello, into fans themselves.

The Volunteer Fireman is appointment television, and you don't wanna miss out on watching this generational arm.