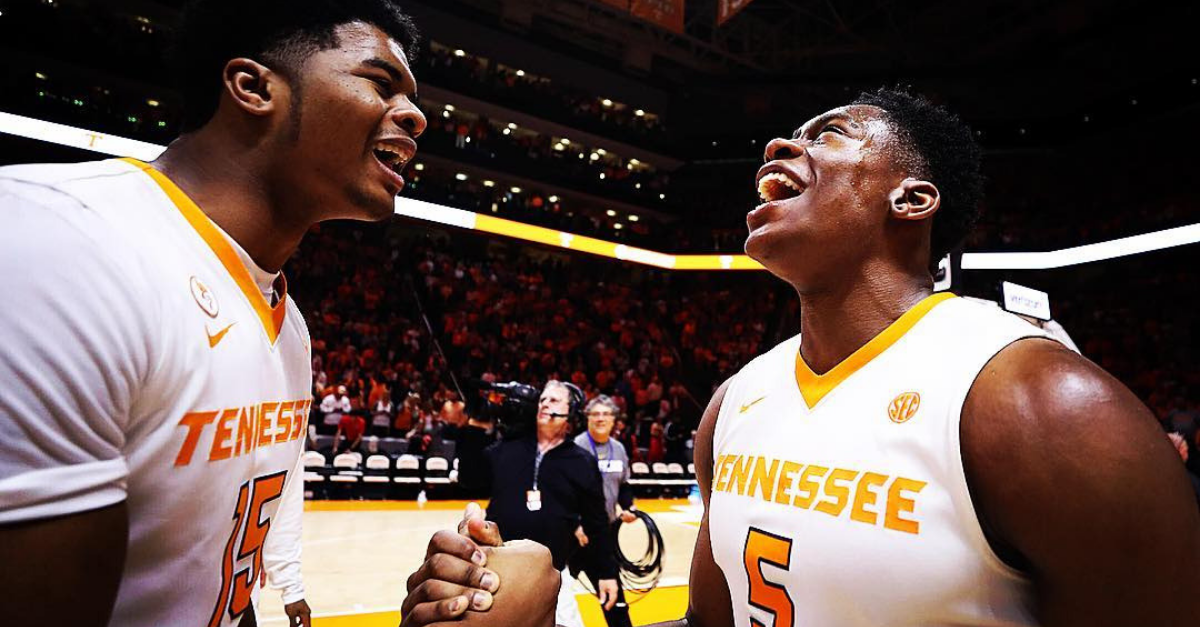 PHOENIX (AP) ? Admiral Schofield hit a 3-pointer with 24 seconds left and scored 25 of his 30 points in the second half, helping No. 7 Tennessee knock off top-ranked Gonzaga 76-73 in the Colangelo Classic on Sunday.

Tennessee (7-1) jumped on Gonzaga early and fought back from a nine-point, second-half deficit.

Reigning SEC player of the year Grant Williams fouled out with 2:30 left, but the Vols went up two when Schofield banked in a 3-pointer with 80 seconds left.

After Rui Hachimura tied it with two free throws, Schofield hit a long 3 and Tennessee held on for its first win over a No. 1 team ? fifth overall ? since beating Kansas in 2010.

Gonzaga (9-1) had two shots at a tying 3-pointer, but Zach Norvell Jr. and Hachimura missed.

Hachimura and Brandon Clarke had 21 points each for the Bulldogs.

The Zags passed every previous test despite playing without injured forward Kevin Tillie.

Gonzaga blew out Texas A&M in Spokane, then knocked off Illinois, Arizona and then-top-ranked Duke to win the Maui Invitational. The Bulldogs beat Washington in their last game on Hachimura’s last-second jumper.

Tennessee, a popular preseason Final Four pick, took No. 2 Kansas to overtime before losing and beat Louisville by 11 in its closest win of the season.

Hachimura had no trouble against one of the nation’s best defensive frontcourts, effectively using his mid-range jumper to score 14 points by halftime.

Williams had 12 and the Vols led 34-33 after Jordan Bowden hit a last-second jumper.

Gonzaga built a quick seven-point lead in the second half, let Tennessee claw back, then went up 58-50 on a pair of Norvell 3-pointers as he traded baskets and trash talk with Schofield.

Schofield brought the Vols back, tying it at 68l with a 3-pointer from the wing with just over three minutes left.

Tennessee looked every bit a Final Four contender, knocking off the nation’s No. 1 team with its best player on the bench the final 2:30.

Gonzaga had passed all its previous tests, but not having Tillie hurt the Zags against the talented Vols.

Tennessee plays at Memphis on Saturday.

Gonzaga plays at No. 14 North Carolina on Saturday.

READ MORE: Tennessee’s All-Time Starting Five Would Be Dominant in Any Era