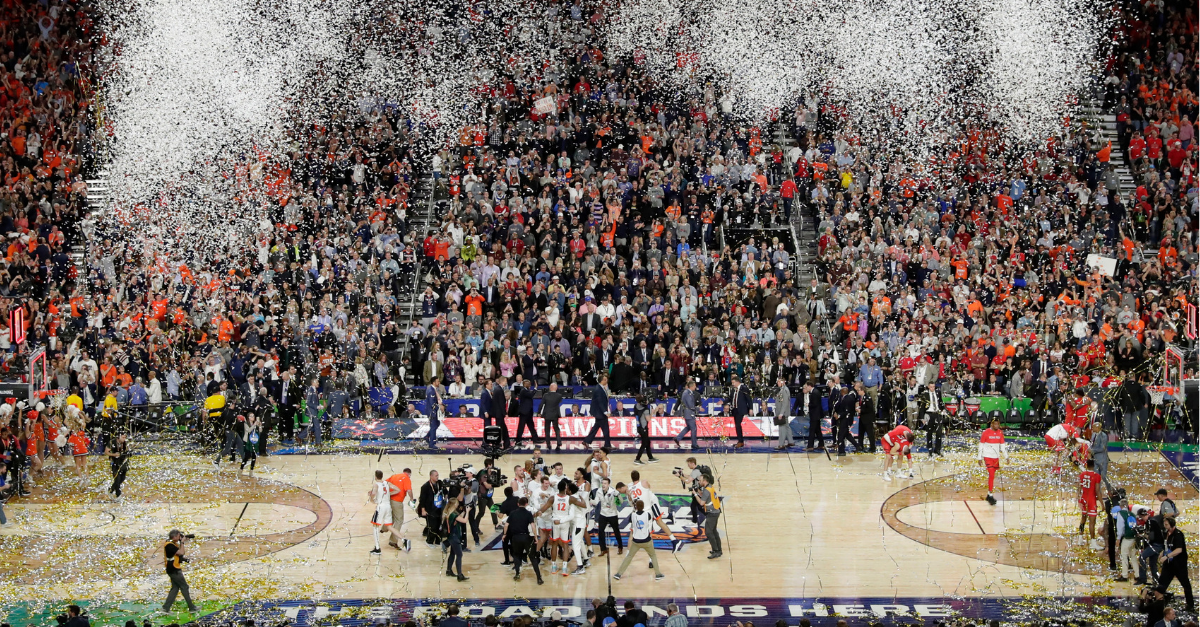 As the confetti poured onto the court inside U.S. Bank Stadium, the Virginia Cavaliers were just beginning to celebrate its victory over the Texas Tech Red Raiders to win the NCAA Tournament national championship game, the program?s biggest first-ever title. It put the perfect exclamation point on the college basketball season, but the Final Four was just the start of some heavy troubles for several who attended the event in Minneapolis, Minnesota.

It?s no secret the NCAA Final Four is one of the biggest sports destinations in the country. Fans and corporate business partners travel from all over to host parties, events, meetings, and watch the end of March Madness each and every year. It apparently is a hot spot for human trafficking, too.

According to the Minnesota Department of Public Safety Bureau of Criminal Apprehension (BCA), an operation from April 4-8 in the Twin Cities resulted in nearly five dozen arrests. Those people are now facing possible felony charges for attempting to solicit children for sex and for trafficking victims, per the release.

A total of 58 people were arrested and 28 victims, including one minor, were rescued from trafficking situations.

Officials have arrested 58 people as a result of an undercover sex trafficking operation during the NCAA tournament's Final Four in Minneapolis https://t.co/t6Dwbvyue4

During the operation, the suspects ?chatted on several social media platforms with undercover agents and investigators who posed as minors or as sex buyers.? The suspects were then arrested at the arranged meeting place and were booked into the Hennepin, Anoka or Ramsey county jails.

The BCA said in the press release that 47 people were arrested on probable cause and charged for felony solicitation of minor and 11 were charged for sex trafficking or promotion of prostitution. Most of the suspects were from the Twin cities area.

?This operation is an example of the aggressive steps necessary to stop traffickers and johns who buy and sell people for sex in our communities. We can?t let this crime continue and we must work together to stop it.?

A sex trafficking sting operation by law enforcement officials is nothing new. It happens at every major sporting event, including this year?s Super Bowl in Atlanta. New England Patriots owner Robert Kraft headlined that news in a similar case.

Officials in the Twin Cities wanted to make sure it would not be tolerated under their watch, either, and that?s why the task force was created.

?While the eyes of the basketball world were focused on the court at U.S. Bank Stadium, some were attempting to hide in the shadows of our great community, trafficking and exploiting women and girls, inflicting unimaginable physical and emotional harm, and profiting from pain,? St. Paul Police Chief Todd Axtell said in a statement. ?I?m proud to be part of a law enforcement community that wouldn?t stand for it, that collaborated to shine a bright light on the perpetrators and that committed to doing everything possible to help the victim survivors. And it doesn?t end here. The Final Four May be over, but our work to seek justice for those who were harmed is just beginning. We?ll continue to doggedly investigate, build cases and pursue charges. And maybe someday the perpetrators will understand that there is no place for them in the Twin Cities or anywhere in Minnesota if they are going to buy or sell other human beings?not during high-profile events, not ever.?

Needless to say, these suspects are in some hot water.