Geno Auriemma is one of the most successful women's basketball coaches of all time.

The head coach of the dominant UConn Huskies squad has made history throughout his tenure in Storrs, Connecticut by leading some of the most unbeatable teams ever assembled.

Throughout his long coaching career, no one has offered Auriemma more support than his loving wife Kathy.

Who is Geno Auriemma's Wife?

Geno and Kathy Auriemma have been married for more than 40 years.

When they met in the 1970s, Kathy was a cheerleader at Montgomery County Community College, and Geno was playing college basketball. She is currently an English teacher at the University of Connecticut and has been featured on ESPNW and the Hartford Courant.

The pair have three children together : daughters Alyssa and Jenna and son Michael.

Kathy grew up in Philadelphia, Pennsylvania, while Geno was born in Montella, South Italy. The Italian emigrated to Norristown, Penn., when he was young. 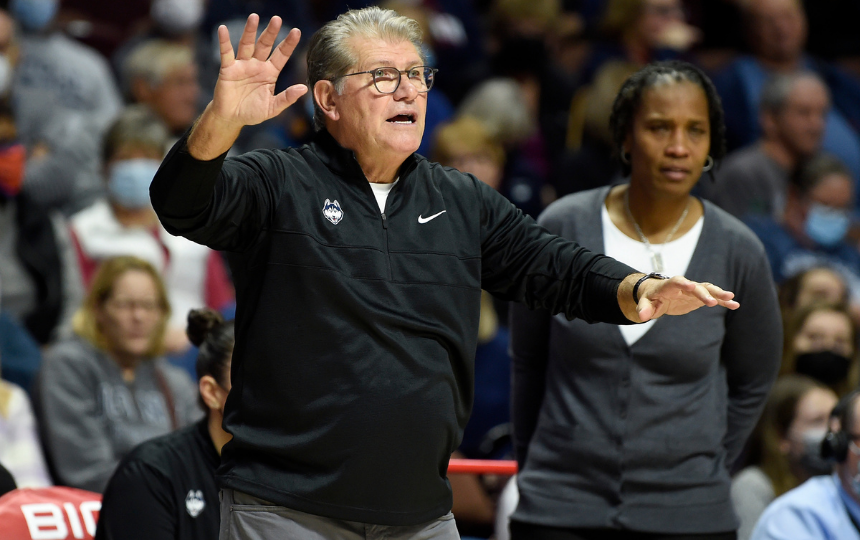 RELATED: UConn Women's Hoops: Why Its The Greatest Dynasty in College Sports

Geno Auriemma's coaching career began back when he was fresh out of college at West Chester University. He earned an assistant coach role with St. Joseph's University before landing a role at his former high school, Bishop Kenrick in Norristown.

A few years later, he earned an assistant coaching position at the University of Virginia.

In just his fourth season at the helm, Auriemma led the Huskies to a Big East title and a Final Four appearance in the NCAA Tournament. The team won its first national championship in 1994-95, taking down Pat Summitt and Tennessee in the championship game.

UConn won another national championship in 1999-2000, which was the first of three consecutive tournament wins under Geno Auriemma's guidance.

Auriemma has coached for the United States national team to multiple world championships and gold medals at the Olympics, having stepped down as head coach in 2016.

Some of the legendary players Auriemma has coached include WNBA stars Sue Bird, Diana Taurasi, Maya Moore, Breanna Stewart, and many more.