If you were bold enough to approach a Georgetown fan and ask them to describe last season's 6-25 campaign in one word, I'm sure they would struggle to settle on one adjective. I mean, words such as disappointing, infuriating, discouraging and underwhelming should naturally flow into your brain once your favorite team ends the year on a 21-game losing streak.

If you're an individual who strongly believes in securing moral victories, though, you probably tipped your cap to the Hoyas for continuing to play with energy and passion despite piling up discouraging Big East losses. Look, if you truly expect diehard supporters of the program to accept another mortifying Big East performance in 2022-23, you must be having a blast in that glorious fantasy world of yours.

So, will the Hoyas turn things around this year with a brand-new roster? Let's take a look. 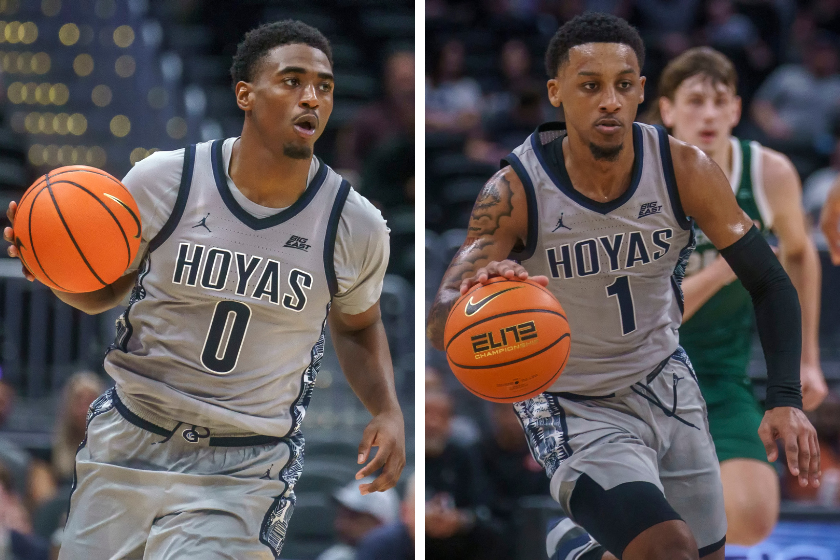 RELATED: Patrick Ewing's Time as a Player at Georgetown was Prolific. His Time as Coach? Not So Much

After coaching a team that was undoubtedly the laughing stock of the Big East in 2021-22, Ewing did everything in his power to upgrade his roster entering year six of his tenure. By adding a few quality transfers in the offseason, I think it's safe to say that Ewing was serious about making the 2022-23 season a stress-free experience for everyone involved.

If you haven't already, I suggest that you familiarize yourself with Brandon Murray and Primo Spears as soon as possible. Why? Well, because I firmly believe these newcomers have the potential to be difference-makers for the Hoyas this season.

Murray, who spent last season at LSU, is a confident guard who embraces on and off-ball duties on the offensive end. Whether he's lowering his hips in preparation to engage in activities away from the basketball or creating his own offense with the ball in his hands, you can normally count on Murray to make things happen in an assertive fashion. Once he sets his feet from beyond the arc and sees a few trey balls travel down the net, you shouldn't be surprised to see him mix in some one dribble-pull ups and explosive right/left handed drives to the cup. Murray took just 19.3 percent of Tigers' shots in 2021-22, but because Georgetown will depend on the second-year guard to be one of the team's main offensive weapons this season, I expect that percentage to increase with the Hoyas.

Primo Spears may not be a household name at this point in time, but the Duquesne transfer has already proven that he can be a reliable crunch-time scorer for Patrick Ewing and the Hoyas. I mean, just think back to Georgetown's season opener against Coppin State for instance. When the Hoyas desperately needed to put the Eagles away in overtime, Spears stepped up to the challenge without having to resort to playing hero ball. You see, when you have a point guard who can slither his way into the paint whenever he pleases, there's really no need to execute stagger or double screens in order to free up a wing.

Instead, you should space the floor, instruct one of your big men to set a high ball-screen for the PG and allow the ball-handling maestro to close out the ball game. Wisely, the Hoyas utilized this tactic and watched as Spears made intelligent reads based on the various coverages the Eagles elected to employ. When the opposing big men opted to respect his speed and flexibility as a rhythm side-to-side ball-handler, Spears accepted the two points that were available to him in the mid-range area. When Spears was tasked with winning a foot race, he accelerated toward the rim and made friends with the backboard in the process. Simply put, Spears delivered when it mattered most and notched 28 massive points in his first contest as a Georgetown Hoya. 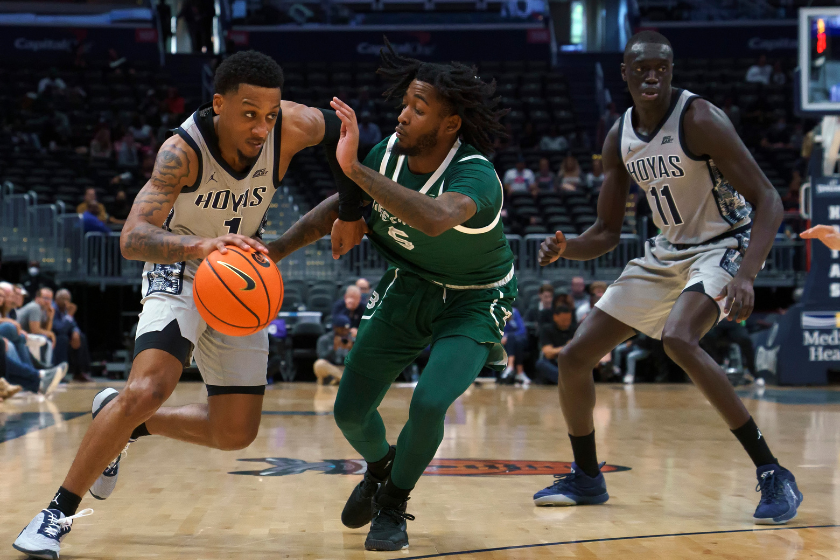 You should also keep an eye on Akok Akok (UConn transfer) and Qudus Wahab (Maryland transfer), as they could also play vital roles during the Hoyas' revenge season. Like Josh Leblanc Sr., Akok is a forward who always seems to be in the thick of the action on both ends of the floor. His endless motor enables him to not only position himself perfectly for offensive/defensive boards and high point the basketball in the air, but also elevate for vicious blocks in the paint. If he vows to have his hands ready when Primo Spears darts through the lane this year, he could be the recipient of at least two dump off passes for layups and/or dunks per game.

If you watched Wahab play at Georgetown from 2019-2021, you should comprehend why Patrick Ewing felt the need to bring the 6-foot-11 rebounding specialist back to his first college basketball home. While he's still learning how to fire crisp passes out of double teams, Wahab is a major force down low when he keeps his body in front of his post defender and doesn't put the ball on the deck more than three times. In other words, the quicker he gets to his right-handed jump hook in the middle of the lane, the better. Now, Wahab can do plenty of damage as a hard roller in pick-and-roll situations, but he's certainly capable of receiving one-handed fastballs near the free throw line and drilling 15-footers with ease. On the defensive end, it'll be interesting to see if the impressive rim deterrent (averaged 1.6 blocks per game last year) will make a noteworthy appearance in 2022-23.

Overall, there's a lot to like about this year's Georgetown squad, and if they continue to improve as they move through the non-conference portion of their schedule, they could get off to a faster start in the Big East. As for my win total projection for Georgetown this year, well, let me play it safe and say that I don't see the Hoyas recording zero league victories for the second straight season.