Loyola-Marymount forward Hank Gathers collapsed on the basketball court in the middle of the West Coast Conference Tournament semifinals against Portland after completing an alley-oop. Portland guard and Miami Heat head coach Erik Spoelstra witnessed the fall a few feet away.

The basketball team warmed up. The circumstances were odd.

The conference commissioner ultimately canceled the rest of the WCC Tournament following the tragic death of the 23-year-old Gathers, and Loyola Marymount was awarded the conference's automatic bid to the 1990 NCAA Tournament as the regular-season champions.

They took the court. What should be the highlight of these young basketball players' lives was clouded by the sudden departure of their top interior offensive option, their best rebounder, their leader, their friend.

The team had proved they could hang with anyone. Earlier in the year it had taken Hall of Fame player Shaquille O'Neal and LSU to overtime on the road in Baton Rogue. That confidence was hanging in the balance.

Gathers' autopsy revealed he died of hypertrophic cardiomyopathy, a heart-muscle disorder that restricts blood flow. Earlier that season, Gathers collapsed against UC Santa Barbara. It was discovered he had an irregular heartbeat, and he was subsequently prescribed the beta-blocker Inderal. He was a projected NBA lottery pick.

Just over five minutes into the second half of LMU's first-round game, the whistle blew. Bo Kimble was fouled. The senior guard was a longtime friend of Gathers. They grew up and went to Dobbins Technical High School in Philadelphia together, moved to California and attended USC their freshmen year together and transferred to Loyola Marymount together.

It was only right they shoot their first free throw of the NCAA Tournament together.

Gathers excelled at scoring and rebounding, but his Achilles' heel was at the charity stripe. A natural right-handed shooter, Gathers switched to shooting lefty for any hope of improvement.

The Philly native stepped to the line, and the ref bounced him the ball. In honor of Gathers, Kimble, a right-handed shooter, vowed to shoot the first free throw of every tournament game left-handed.

He dribbled to compose himself. He looked awkward as he lifted the ball with his left hand but he was brimming with confidence. The ball was good as soon as it left his hand, and it buried the back of the net. Kimbell led the team with 45 points and 18 rebounds in the 11th-seeded Lions' victory over New Mexico State.

Head coach Paul Westhead's high-octane, fast-break offense was too much to handle. Behind 41 points from sharpshooter Jeff Fryer, LMU ran the Wolverines into the ground 149-115.

The Lions survived the first weekend to earn a date with Alabama in the Sweet 16. The Crimson Tide proved to be their toughest test. Up two and the clock winding down, the Lions escaped with a 62-60 victory after Robert Horry missed a game-tying shot at the buzzer.

Westhead's squad advanced to the Elite Eight to face UNLV -- the team it opened its season against. The eventual national champions dismantled LMU's speedy offense, winning 131-101.

Loyola-Marymount played the tournament for a championship.

They needed the distraction.

Four games and 160 minutes where it was only about hoops. 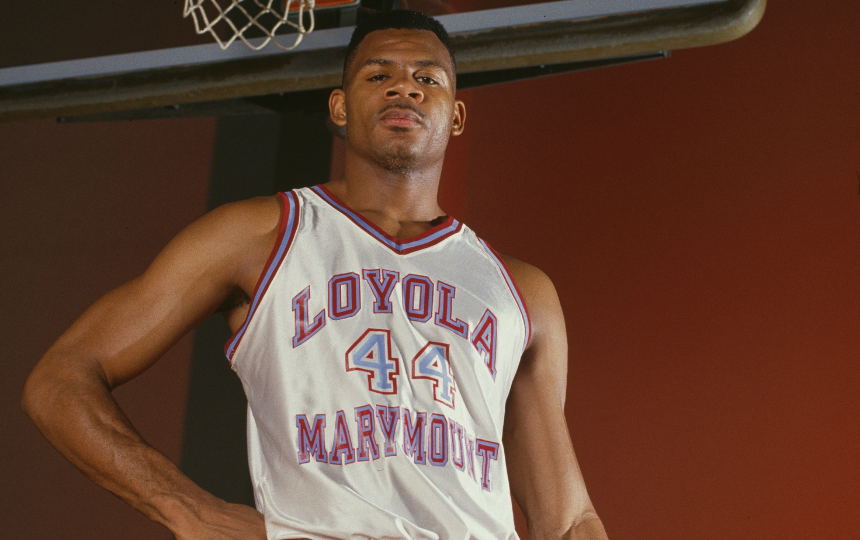 A statue of Gathers was unveiled the last week of February 2020, a few days before the 30th anniversary of Gathers' death in front of Gersten Pavilion. It models Gathers in his retired No. 44 jersey loading up for a dunk.

The tribute embodies Gathers' career -- where he became the second player in NCAA Division I history to lead the nation in scoring and rebounding as a junior -- and spirit.

Gathers' mother Lucille, brothers, son Aaron Crump, and a majority of his coaches and teammates made the trip to Loyola Marymount University's campus for the ceremony.

It matters they captured enough magic to win three games on the biggest stage. It matters they played for their fallen teammate and brother. It matters Bo Kimble shot two more left-handed free throws during their run.

This story was originally published on April 3, 2020.