When you think of producers of premier basketball talent, the first college basketball programs that come to mind are Duke, UCLA, North Carolina, Kansas and Kentucky. Understandably so. These programs are the blue bloods of the blue bloods.

However, there's a school down in Baton Rogue, Louisiana that's produced it's fair share of hoopers. Two of the best to ever do it, including perhaps the greatest college player ever, in fact. We're talking, of course, about the LSU Tigers.

Since the program started in 1909, LSU has advanced to four Final Finals, won 11 SEC regular season crowns, including 2019 under head coach Will Wade, and took home the SEC Tournament title in 1980. The Tigers have had All-Americans in every decade since the 1930s with some solid NBA players such as Stromile Swift, Brandon Bass, Tyrus Thomas, Glen Davis, Anthony Randolph, Marcus Thornton and Ben Simmons all playing at Pete Maravich Assembly Center since 2000.

But who is on Louisiana State University's all-time starting lineup? It should be pretty obvious if you look up into the rafters or just walk around outside and see the massive statues put up by LSU Athletics. 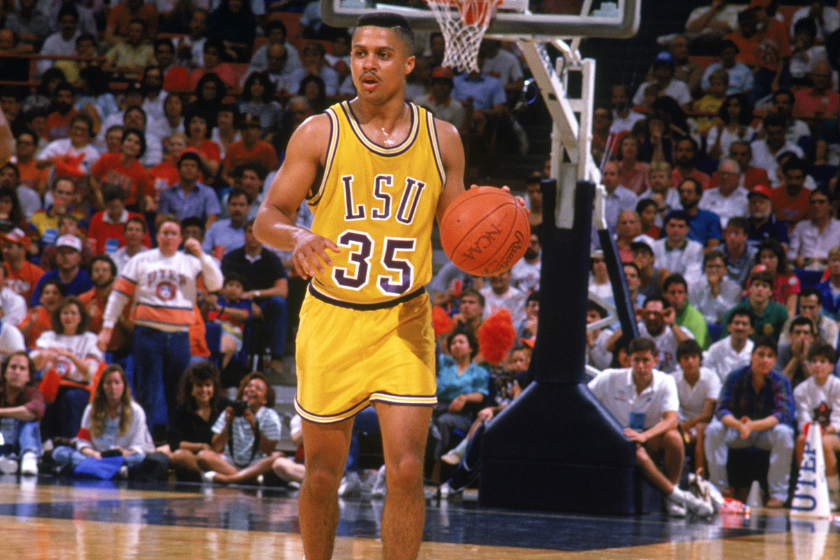 Before he was known as Mahmoud Abdul-Rauf, Chris Wayne Jackson got buckets by the bunches for the Tigers. The 6-foot-1 point guard was simply incredible playing alongside future Hall of Fame center Shaquille O'Neal (below).

Although Jackson only stayed for two seasons in Baton Rouge before being the No. 3 overall pick in the 1990 NBA Draft, he made the most of his time, winning SEC Player of the Year honors and being named a Consensus First-Team All-American as both a freshman and sophomore. 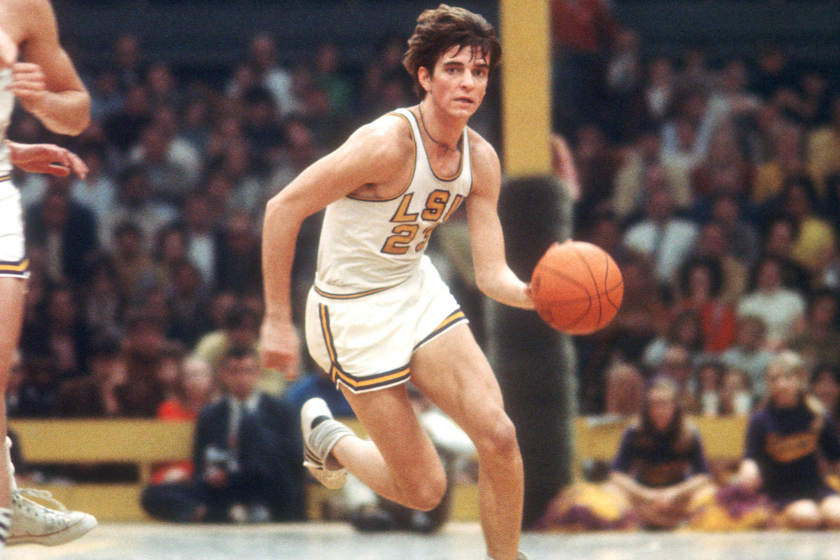 A player doesn't become the namesake of an entire arena without doing something historic and, well, Maravich did that and more. Much, much, much more. In fact, there has been no college basketball player in history as dominant as Pistol Pete.

At 6-foot-5 with advanced game well before his time, Maravich dazzled for LSU basketball and will forever be the ultimate legend of the program. The shooting guard is the all-time leading NCAA Division scorer with 3,667 points, an average of 44.2 points per game, and did it WITHOUT A 3-POINT LINE AND SHOT CLOCK.

Shortly after his death in 1988, when he was just 40 years old, LSU Assembly Center was renamed to Pete Maravich Assembly Center, and his No. 23 jersey hangs proudly in the rafters.

Maravich, who was born in Aliquippa, Pennsylvania and went to high school in both South Carolina and North Carolina, was a NBA icon, too. He was a five-time NBA All-Star, a scoring champion, and was named to the NBA's 50th and 75th Anniversary All-Time Teams. His No. 44 jersey has been retired by the Atlanta Hawks, while his No. 7 hangs in the rafters of both the Utah Jazz and New Orleans Pelicans.

The Naismith Memorial Basketball Hall of Fame needs its own wing dedicated to Maravich, and it all started in Baton Rouge with Tigers basketball. 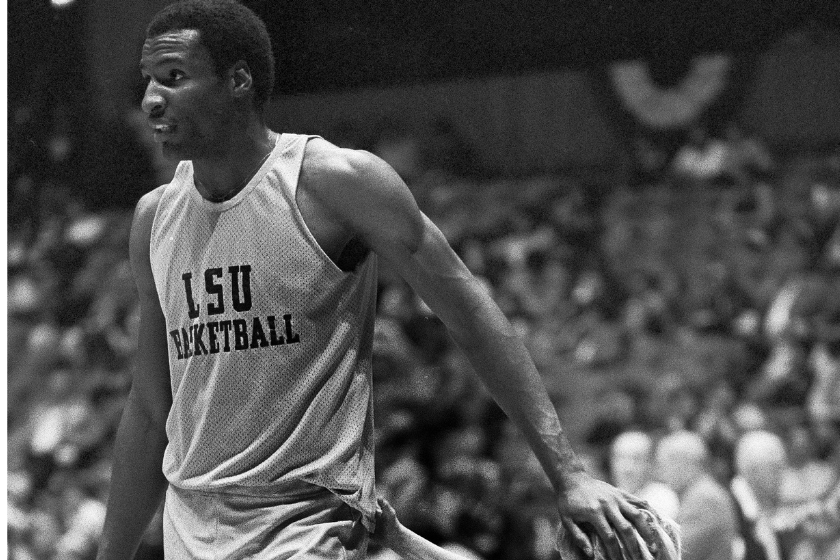 While it would be easy to toss in the likes of Ben Simmons or another LSU star from recent memory here and move on, it's actually impossible to not include Rudy Macklin. He snatched 32 rebounds in his first-ever game at LSU, for crying out loud.

Oh, if that's not impressive enough, the 6-foot-7 forward was a two-time First Team All-American as a junior in 1980 and senior in 1981. He even won the SEC Player of the Year and led LSU to the 1981 Final Four in his final season.

If not for Maravich's insane number, Durand Macklin would get a lot more love in LSU history, especially considering he left the school as the all-time leading rebounder and second-all-time scorer with over 2,000 points. 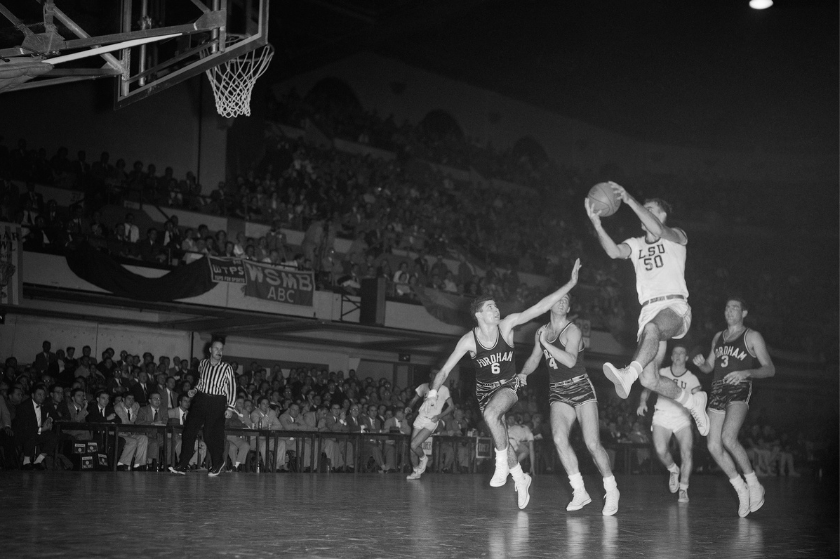 One of the great players to ever lace them up in basketball history, the 6-foot-9 power forward was a sensational player for LSU before his legendary career in the NBA, where he was an 11-time NBA All-Star and two-time NBA Most Valuable Player.

Petit led the SEC in scoring for three-straight seasons, which probably could have been four years had freshmen been able to play varsity college basketball in the 1950s.

Nevertheless, Pettit, who has an amazing statue just outside of the Pete Maravich Assembly Center and a street named after him in Baton Rouge, was an All-SEC selection all three years, a two-time All-American, and led LSU Tigers men's basketball to their first-ever NCAA Final Four in 1953.

Petit broke a ton of SEC records, too, including the single-game scoring record and scoring average in a season. Do you know who broke those? Who else? Pete Maravich. 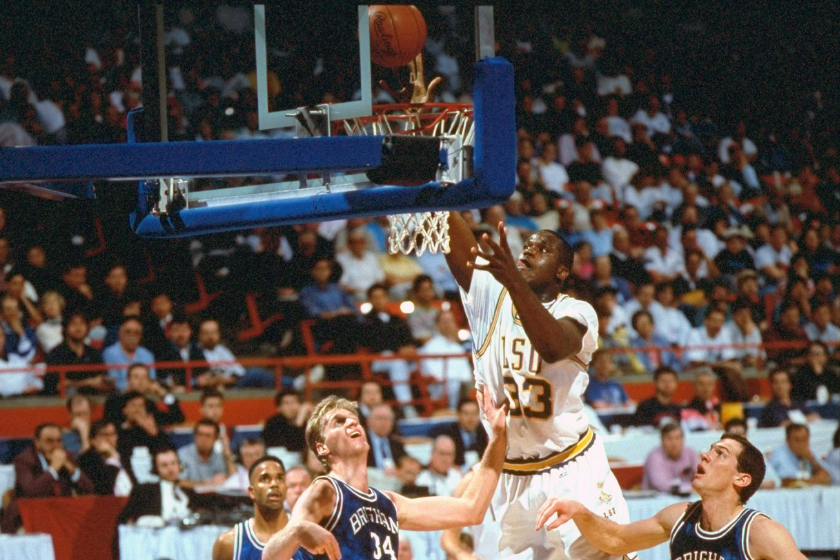 The Big Diesel, the man in the middle with so many nicknames and a crazy net worth, was an absolute force of a player his entire basketball career. Truth be told, although quite slimmer in those days, he was a unicorn of sorts with his 7-foot-1 frame and uncanny ability to run the floor for his size.

At LSU, Shaq was a two-time All-American, two-time SEC Player of the Year, and was named the National Player of the Year by multiple outlets in 1991. He averaged 21.6 points and 13.5 rebounds per game in his three-year career, which is pretty ridiculous and also rather modest in comparison to his counterparts on this list.

There's a 900-pound bronze statue right in front of the LSU Tigers Basketball Practice Facility in case you need to know just how much O'Neal, the former NBA MVP and four-time NBA champion -- three with the Los Angeles Lakers and one with the Miami Heat -- means to the basketball program's history. 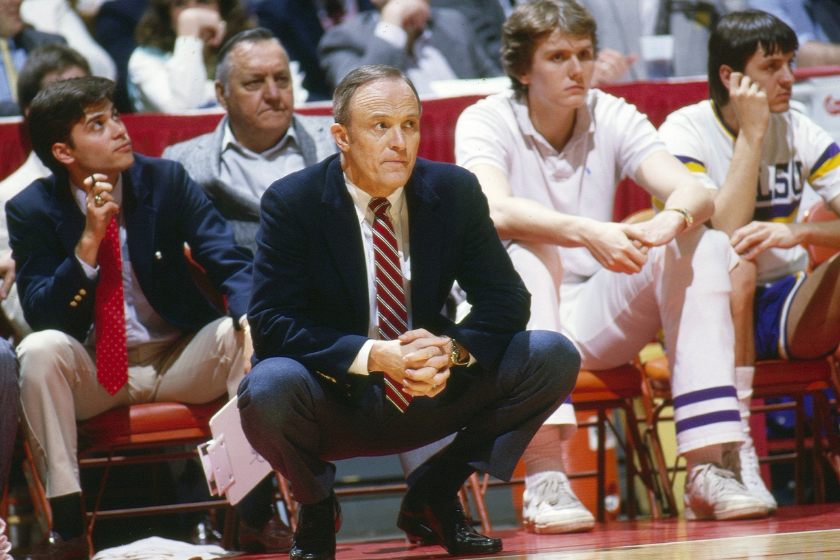 When Dale Brown was hired in 1972 to replace Press Maravich, the father of the famous "Pistol" Pete Maravich, the expectations to continue the excellence were lofty, despite the program's history of mediocrity. Brown lived up to everything and more.

For a program with only two NCAA Tournament appearances in the 25 years before his arrival, Brown made LSU a winning program, amassing 448 victories and taking the Tigers to 13 NCAA Tournaments, including two Final Fours in 1981 and 1986.

The four-time SEC Coach of the Year, who is now 86 years old, was inducted into the College Basketball Hall of Fame in 2014.