5 NCAA Tournament Teams That Could Be Dangerous This March 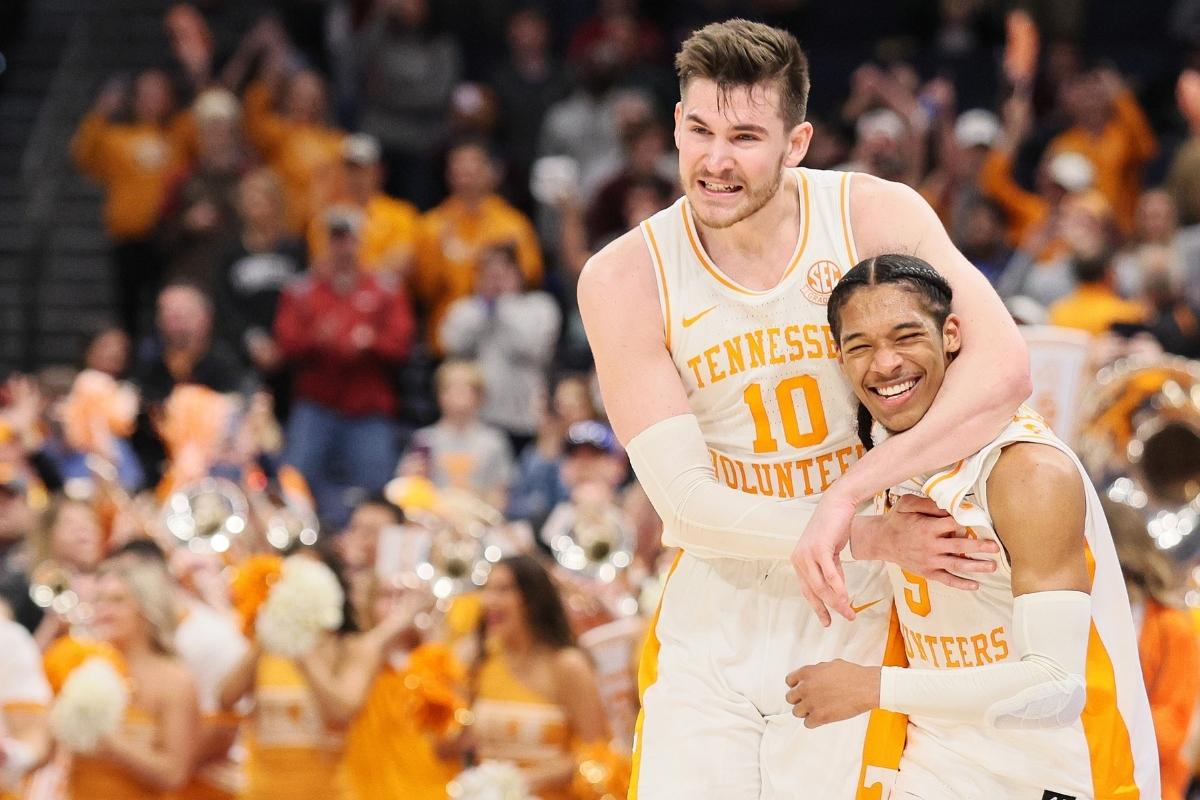 Every year during the middle of March, diehard college basketball fans pinpoint certain teams who could be dangerous in the NCAA Tournament.

How do they go about doing that? Well, it all depends on the person. Some fans focus on mediocre high-major teams who could overachieve in the Big Dance, trying to sniff out potential March Madness sleeper teams to give their NCAA Tournament brackets an edge. Other fans like to focus on talented mid-major teams who aren’t getting enough love from the media, those overlooked teams who may have a chip on their shoulder after Selection Sunday.

I like to concentrate on squads that have high ceilings going into the NCAA Tournament because those are the squads you can usually trust when the bright lights come on. So without further ado, let’s examine five teams who could make some serious noise in the NCAA Tournament.

Things didn’t look good for Arkansas after they lost their first three SEC games, but the Razorbacks quickly got back on the winning trail. They rattled off eight straight victories after falling to Texas A&M on January 8 including a crucial home win against Auburn, who was the No. 1 ranked team in the country at the time.

The Razorbacks fell to Alabama a few days later, but they rebounded by going 5-1 in their final six regular-season SEC contests and earning a double-bye in the SEC Tournament. Despite coming out flat against Texas A&M in the semifinals after beating LSU handily in the previous round, I still have faith in Arkansas’ ability to win several games out of the West Region of the NCAA Tournament. They are led by the SEC’s second-leading scorer, JD Notae, who is having an unbelievable senior campaign.

Notae is averaging 18.4 points per contest and has netted 25 or more points on six different occasions. When the Razorbacks need a basket, you can expect Notae to receive a high ball screen and stroll his way into the paint for high percentage floaters/layups. Notae doesn’t have to do it all by himself on the offensive end though, as he is surrounded by multiple scoring threats.

Stanley Umude, Au’Diese Toney, Davonte Davis, Chris Lykes and Jaylin Williams have all pitched in offensively for the Razorbacks this season. Umude is the best three-point shooter of the bunch (37.1 percent), but the other four supporting cast members find unique ways to get involved when they’re on the floor. Defensively, Eric Musselman can rely on Williams to make up for his teammates’ poor on-ball defensive effort at times. He’s taken over 40 charges this season, which shows that he knows when to step up and sacrifice his body for the sake of the Razorbacks.

As long as Notae shows up on the big stage and Arkansas clicks on all cylinders, the Razorbacks will have a chance to make another deep run in the NCAA Tournament, something they’ve been working for since their Elite Eight loss to eventual National Champion Baylor last season.

KJ Williams leads the Racers in scoring with 18.2 points per game and can be productive in a few different ways. He does most of his damage down low with his physical post moves, but he can also be effective on the perimeter. Yes, he’s only shooting 33.7 percent from three this year, but I wouldn’t sleep on his ability to knock down trail threes in transition as well as pick-and-pop threes in the half-court.

Tevin Brown is a pure sharpshooter who has knocked down 100 threes this season. Whenever the 38.9 percent three-point shooter’s backcourt mate, Justice Hill, forces help while attacking the rim, Brown has his hands ready to catch the ball and release it at the top of his jump. Hill is a respectable three-point shooter himself (35.6 percent), but he’s extremely dangerous when he turns on the jets and gets a step on his defenders in the lane.

The Racers aren’t an easy team to light it up on either, as they are currently holding their opponents to 40.9 percent shooting from the field, which ranks 51st nationally. If Murray State’s big three play up to their potential and the team remains alert defensively, the Racers will be a tough matchup in the Big Dance.

Iowa finished fifth in the Big Ten this season, but they still wanted to make a statement in the Big Ten Conference Tournament before they entered the Big Dance. After hanging 112 points on Northwestern in their 36-point victory in the second round, the Hawkeyes knocked off Rutgers, Indiana and Purdue over a three-day span and won the Big Ten Tournament title.

Last year, Iowa failed to advance past to the Sweet 16 as their second-round matchup against Oregon ended in a 15-point defeat. There’s no doubt that memory is still fresh in the minds of the Hawkeyes, even if they have a tough road out of the Midwest Region. That road may have to run through the Providence Friars, who have KenPom’s highest Luck Ratings in the tourney.

Iowa’s offensive identity is not a secret, they take a lot of threes and make a lot of threes. On average, they attempt 25 triples per game and drill 9.3 of them, which ranks 26th nationally. They are highlighted by the Big Ten’s leading scorer, Keegan Murray (23.6 points per game), who has displayed his offensive versatility throughout the 2021-22 season. He uses his length to shoot over smaller defenders in the low-post and has a positive offensive impact from beyond the arc (40.5 percent three-point shooter). Jordan Bohannon and Kris Murray are also lethal shooters from deep who will make defenders pay for leaving them open on the perimeter.

They are shooting 38.5 percent and 40.6 percent from deep respectively and can erupt from three-point range on any given night. If the Hawkeyes get it going from deep in the NCAA Tournament, they could easily find themselves in the Final Four later down the road.

Tennessee still has a lot to prove after failing to meet expectations last year, but they certainly look like they are primed for a strong NCAA Tournament showing. The Volunteers took off after losing to Arkansas on February 19 by winning their next seven games and defeating all three of their opponents in the SEC Tournament.

The Volunteers may not wow you offensively, but their stingy defense should catch your attention during March Madness. They only allow 62.8 points per game, which ranks 24th in the country. It’s always nice to be able to hang your hat on the defensive end when shots aren’t falling for you consistently, which is exactly what Rick Barnes’ club does on a regular basis.

In the NCAA Tournament, however, you also need to put points on the scoreboard if you wish to advance, which I believe the Volunteers can do at a high level. Given their position in the South Region of the March Madness bracket, Tennessee’s stiffest competition may come from Villanova in a potential Sweet 16 matchup.

They have four capable scorers in Kennedy Chandler, Santiago Vescovi, Josiah-Jordan James and Zakai Zeigler, who all contributed offensively during the Volunteers’ SEC Championship run. As long as they score efficiently and the Volunteers play tremendous team defense moving forward, they’ll have a chance to do something special in the Big Dance.

Similar to Tennessee, Texas Tech loves to suffocate its opponents in the half-court. They’re only giving up 60.3 points per contest this season and have the 11th best scoring defense in the country. Teams are forced to work for every shot they get against the Red Raiders, which takes a toll on them over time.

You can always count on the Red Raiders to speed up shaky ball handlers and make timely defensive rotations. Offensively, I was hoping Terrence Shannon Jr. would build on the success he had a season ago, but he hasn’t performed at the level I expected him to this year. With that being said, he’s definitely had his moments and still has the potential to put up big numbers in the NCAA Tournament. He notched 14 points on just seven shots against Kansas in the Big 12 Championship game and has been shooting the ball well from three as of late.

Texas Tech only has one player who is averaging at least 13 points per game (Bryson Williams: 13.7 points), but they have several players who can step up and make things happen when the ball is in their hands. Davion Warren, Kevin Obanor, Kevin McCullar and Adonis Arms aren’t prolific scorers, but they’re nice role players who can put the ball in the basket when they have opportunities to do so. We all know that this Texas Tech team will play stout defense in the NCAA Tournament, but if they’re able to make the most of their offensive possessions as well, the Red Raiders could still be playing basketball in April.