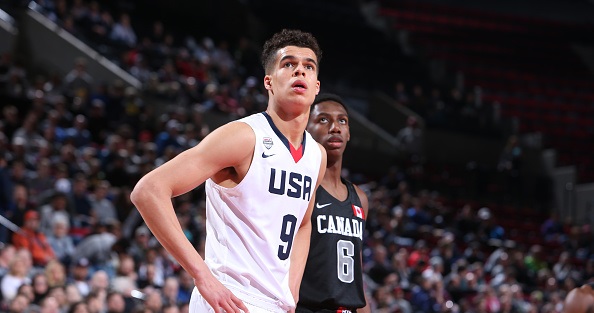 Sam Forencich/Getty Images
PORTLAND, OR - APRIL 7: Michael Porter Jr. #9 of the USA Junior Select Team looks on against R.J. Barrett #6 of the World Select Team during the game on April 7, 2017 at the MODA Center Arena in Portland, Oregon. NOTE TO USER: User expressly acknowledges and agrees that, by downloading and or using this photograph, User is consenting to the terms and conditions of License Agreement. Mandatory Copyright Notice: Copyright 2017 NBAE (Photo by Sam Forencich)

Missouri freshman Michael Porter Jr. will undergo back surgery on Tuesday and likely miss the remainder of the season, the school announced.

Porter will undergo a microdiscectomy procedure of the L3-L4 spinal discs that is projected to sideline him for the next three to four months and will likely cause him to miss the remainder of the year.

Michael Porter, Jr. will undergo surgery on Tuesday, Nov. 21, in Dallas, Texas. The procedure, a microdiscectomy of the L3-L4 spinal discs, has a projected recovery time of three-four months and will likely cause him to miss the remainder of the season.

The school did not say when the injury occurred, but it was previously reported that he suffered a hip injury during warmups prior to the season opener against Iowa State on November 10. He played in just two minutes during that game and has not played since.

Porter saw a specialist for the injury on Monday and it was later determined that he would require surgery. He was widely considered to be a high draft pick in next year’s NBA draft and was expected to help Missouri become a contender this season in college basketball.

Also recall that Porter missed the Jordan Brand Classic week with what was labeled as back soreness last spring. May not be connected, but teams will need to be sure there’s no larger issue there.

It’s unclear if Porter has a history of back problems, but he has previously missed the Jordan Brand Classic with back soreness. NBA teams will surely be monitoring his progress this season and will understandably do extensive health tests and physicals on Porter ahead of the draft next year. However, it sounds like he will still likely be a top-five overall pick.

Multiple NBA GM's have told me that, as long as Michael Porter Jr.'s back checks out come June, still likely a top 5 overall pick.

Hopefully Porter will be able to make a full recovery and still proceed with playing in the NBA as a high draft pick.