Mickie Krzyzewski is the Foundation of Coach K’s Legendary Career 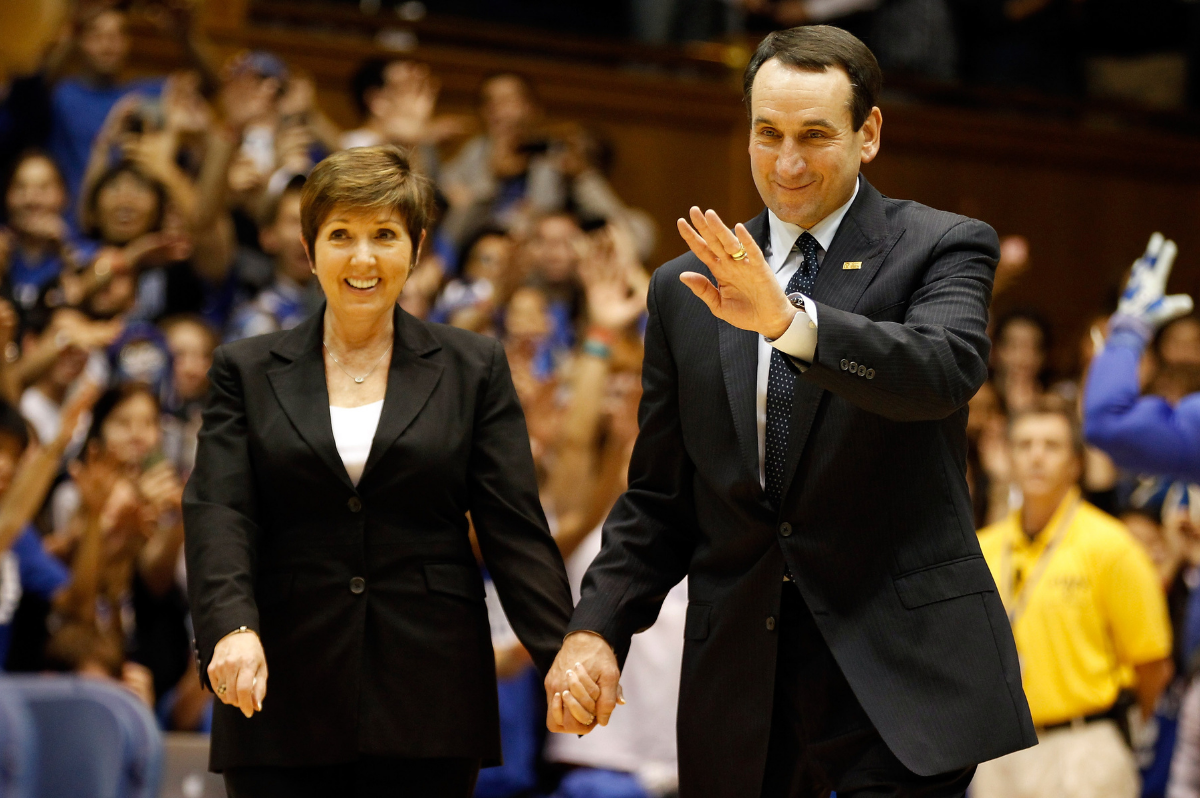 Yet, when he refers to his Duke coaching career, which began in 1980, he refers to it as “our career.” Our being him and his wife Mickie Krzyzewski.

“It’s always been, for the two of us, our career,” Krzyzewski said, referencing him and Mickie, at the Blue Devils’ media day in September 2021, per the Duke Chronicle. “When [then-athletic director] Tom Butters, God bless him, hired me, he mentioned to Mickie, ‘I just want you to know, I’m not hiring your husband, I’m hiring your family,’ and that was a really big-time thing to say to a 33-, 34-year-old couple getting ready to take a real big jump into the ACC.”

Take it from the man himself. He wouldn’t have had the career he did without Mickie.

Mike and Carol “Mickie” Krzyzewski met when Mike was a cadet at the United States Military Academy at West Point. The two like to joke how Mickie was actually Mike’s third choice for their first date to a Chicago Bears game. You know what they say in baseball, the third hitter in the lineup is the best. Coach K can say that about his love life, too. The couple tied the knot in 1969.

Mickie, who was reportedly an airline stewardess when the two met, spends her time being active in the Durham, North Carolina community.

She and her husband started the Emily Krzyzewski Center in 2006. The non-profit organization, which was named after Coach K’s mother, focuses on inspiring students to dream big, act with character and purpose and reach their potential as leaders in the community. Additionally, the two are active supporters of Duke Children’s Hospital, Children’s Miracle Network and the V Foundation for Cancer Research.

Of course, Mickie is also the unofficial mother of the Duke Blue Devils. She can be found at home games at Cameron Indoor Stadium and whenever the team travels for the NCAA Tournament. Duke basketball refers to itself as a brotherhood, and what would a brotherhood be without a mother?

Although she has more than 1,000 unofficial sons, her and Coach K share three daughters together of their own.

Coach K made sure to make his daughters Debbie, Lindy and Jamie his first priority throughout his career. According to the Duke Chronicle, the Krzyzewski home didn’t have any Duke memorabilia when the girls were growing up.

“The things that we would hang in our house or on our fridge was stuff that the girls had accomplished. So there was no Duke hanging in the house. We tried to make sure that they knew that they came first to us and that they were more important to us,” Mickie said of drawing that line from the moment [she and Mike] joined the Blue Devils and had to decorate their new home in Durham.

But Mickie and the girls were just as much a part of the program as anyone when they were growing up. They were allowed to travel on the team bus and visited Coach K in the head coach’s locker room after each game, a tradition they follow to this day.

Growing up around basketball, it was only natural a few of the Krzyzewski daughters pursued a career in athletics at Duke University. Debbie Savarino, the oldest, is an assistant athletic director, and Lindy is the staff counselor for the men’s basketball team. As for Jamie (now Jamie Spatola), although she doesn’t work directory in the sports field, she’s an author and co-wrote the book “Beyond Basketball” with her father in 2006.

Other than the “starting 5” of Mike, Mickie, Debbie, Lindy and Jamie, the Krzyzewski family now includes 10 grandchildren. Debbie’s son Michael Savarino is currently a junior on the Duke basketball team. He spoke about playing for his grandfather to the Duke Chronicle:

“I was blessed to be able to grow up around the program, and I’m blessed to be in it,” Michael said, reflecting on his time with Duke men’s basketball since joining the team as a walk-on in 2019.

“I feel like I know [Coach Krzyzewski] so much better, as a coach and as a grandfather, just from being around him every single day. Like, I literally see him every day. So having little interactions like that is something I’m incredibly, incredibly grateful for, and I wouldn’t have it if I didn’t come here.”

Michael noted how Krzyzewski is his grandfather off the court, but he’s his coach on it. He referred to the day before Coach K announced his retirement as “one of the best days of his life” because it was the day he was awarded a scholarship.

“[Krzyzewski] just told me how important I was to the team and the role, the specific role I’ve been playing and how good of a job I’ve been doing and how he wanted me to elevate that role even more, and how I need to be a little more vocal, I need to be a leader,” Michael recalled. Then Krzyzewski told him he was putting him on scholarship, and “I just break down crying. I probably cried for about 10 minutes,” Michael said.

Five-time national champion. USA national team coach. Bob Knight protégé. One of the greatest coaches in basketball history. Mike Krzyzewski certainly has a lot of titles. He’s most proud of father, grandfather and most importantly, husband.

Coach K has had plenty of incredible teams at Duke, but his greatest was built with Mickie over 50 years ago.