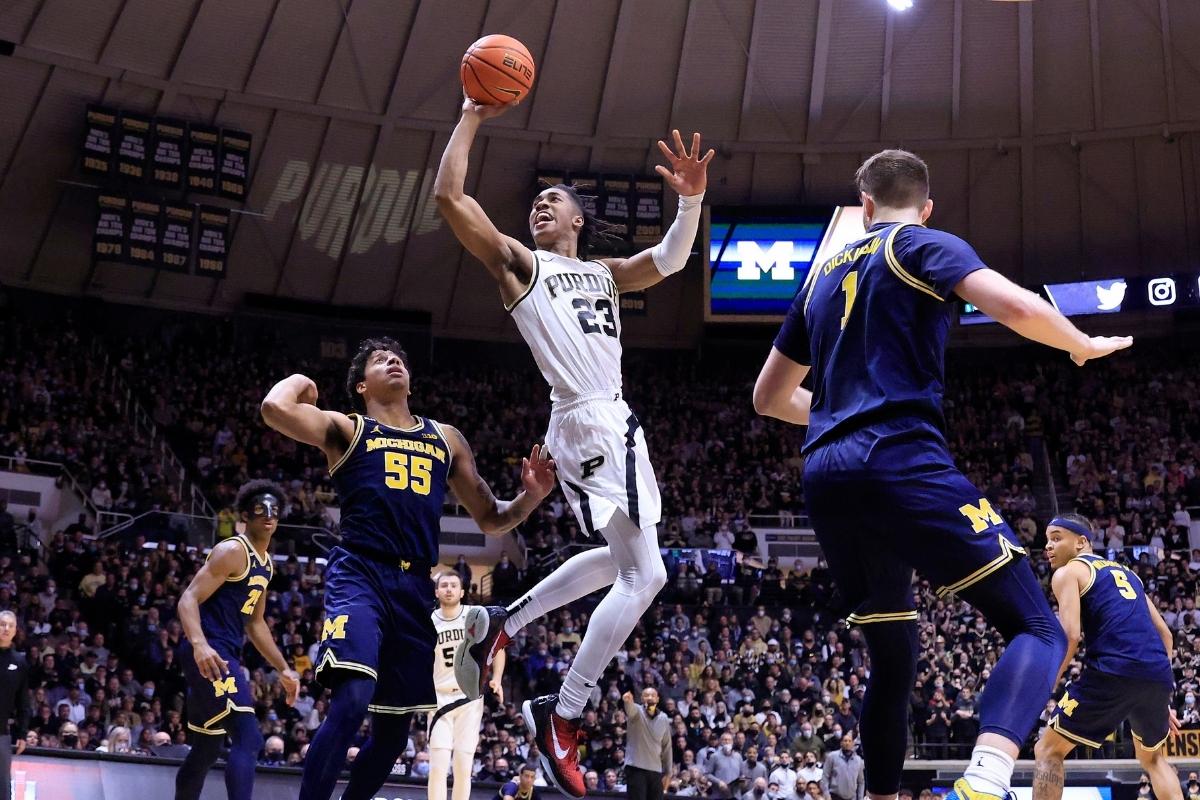 Jaden Ivey could easily be a top three pick in the 2022 NBA Draft. His main objective this year was to take the next step in his game, and the sophomore guard has done just that. Purdue’s impressive season can be attributed to Ivey’s significant leap forward as a player. Yes, Iowa’s Keegan Murray and Illinois’ Kofi Cockburn are the top two scorers in the Big Ten, but everyone in the country knows what Ivey can do offensively.

His ability to take over games has resulted in several pivotal victories for the Boilermakers this season. No wonder Matt Painter and company gradually bolstered their resume and received a relatively high seed in the NCAA Tournament.

Ivey is known for his unbelievable speed and athleticism in the open court, which creates problems for teams who struggle to contain explosive guards in transition. If he spots an open lane as he’s effortlessly gliding down the floor, he’ll step on the gas and accelerate toward the rim. By pushing the ball out in front of him in fast break situations, Ivey makes it extremely difficult for defenders to poke the ball away from behind.

In the half court, Ivey can be an effective on- and off-ball threat. When he’s given opportunities to break his defenders down off the dribble, he always rises to the occasion by making one decisive dribble move and getting downhill in a hurry. If you see a defender stumble while guarding Ivey, just know that the 6-foot-4 guard’s swift in-and-out or between the legs dribble move successfully got the job done.

He’ll confidently drain long-range three-point jumpers if defenders give him too much space on the perimeter. He’s also proven that he can make high-level reads in pick-and-roll situations when need be.

Off the ball, Ivey understands the importance of regularly using screens. If he isn’t coming off pin-downs or down screens and drilling mid-range jumpers, you’ll find him tightly curling those screens and catching the ball on the run. Sometimes, Ivey will jump-stop in the paint before making the right play. Other times, he’ll show no mercy by cuffing the ball and throwing down aggressive one-handed tomahawk dunks. In other words, there’s nothing defenders can do when it’s showtime for Ivey at the rim.

Ivey was tabbed as a four-star prospect in the class of 2020 by 247Sports and was recruited by Purdue, Indiana, Ohio State, Notre Dame and Butler. He gained exposure by playing high school ball at La Lumiere and competing on the AAU circuit with the Indy Heat. He finished his high school career at Marian High School and committed to Matt Painter and the Purdue Boilermakers on April 24th, 2019.

Ivey’s commitment to Purdue probably came as a surprise to some college basketball fanatics, considering that his mother was a standout basketball player at Notre Dame. Niele Ivey played on the Women’s basketball team from 1996 to 2001 and reached two Final Fours during her time with the Fighting Irish. After helping Notre Dame capture a national title in 2001, the sensational point guard went on the play in the WNBA for five seasons.

Ivey’s play as a freshman may not have impressed everyone, but his numbers were solid for a first-year high-major guard. He averaged 11.1 points per game on 39.9 percent shooting from the field, which earned him a spot on the Big Ten’s All-Freshman team. He exploded for 26 points against North Texas in the first round of last year’s NCAA Tournament, but his offensive outburst wasn’t enough to lift the Boilermakers past the Mean Green.

This season, it looks as though Ivey is on a mission to make his second season in West Lafayette as memorable as possible. He is averaging 17.4 points on 46.2 percent field goal shooting and is prepared to help his squad succeed in the Big Dance.

Of course, guys Like Zach Edey, Sasha Stefanovic and Trevion Williams need to play well in the postseason, but to be frank, Purdue will go as far as Ivey takes them. Even if the Boilermakers come up short in the NCAA Tournament, as they did in the Big Ten Tournament, Ivey will get to showcase his enticing skill set in front of eager NBA scouts on the biggest stage.