"Send it in, Jerome!" Somewhere, broadcaster Bill Raftery was watching the Oregon Ducks' N'Faly Dante soar through the air to deliver what can only be considered an immediate Dunk of the Year candidate. That's how you want to start a game against a top 10 team in the nation.

Less than a minute into the game, Arizona Wildcats guard Kerr Kriisa tried to beat Oregon's full court press by chucking the ball across mid-court. Like a free safety in the backfield, Dante -- Oregon's center -- picks off the pass in front of the scorer's table and takes it all the way to the house. Just as Bill Walton says in the clip, Dante looked like Hakeem Olajuwon. Nothing and no one was stopping him from scoring off the turnover. And he made that known with authority.

Jumping from the block as high as the trees painted on the court, Dante slammed down a contender for Dunk of the Year. He soared, drawing a blocking foul from Kriisa, who stood no chance in stopping the dunk from happening. After all, Dante's knee was almost is Kriisa's face. It's not Kriisa's fault, though. Standing at only 6-foot-3, Kriisa gave up 8 inches to the 6-foot-11 Dante.

The dunk seemed to light a spark for the Ducks and Dante, as Oregon routed Arizona, 87-68. Dante finished the game with a double-double, scoring 22 points and grabbing 10 rebounds. He had gone into the game averaging 13 points and 7.1 rebounds per game.

Dante was a five-star recruit when he joined the Oregon Ducks, ranked as the 14th overall player of the 2019 signing class. 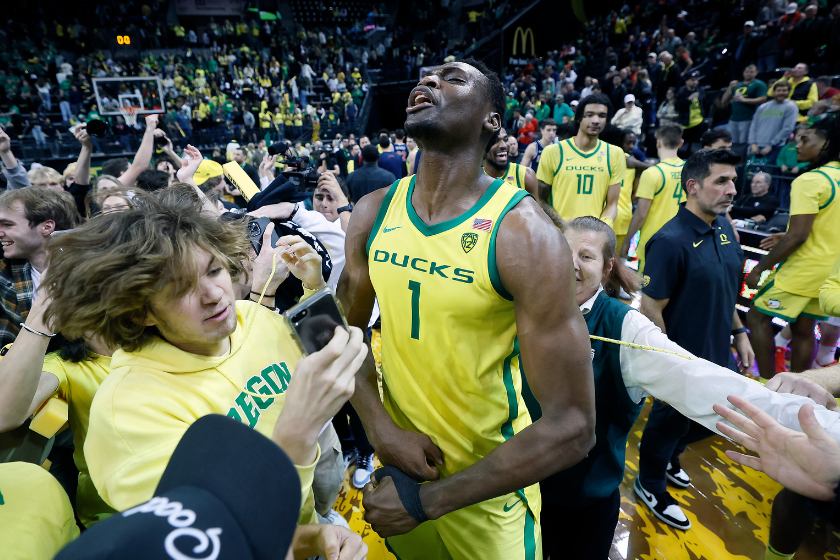