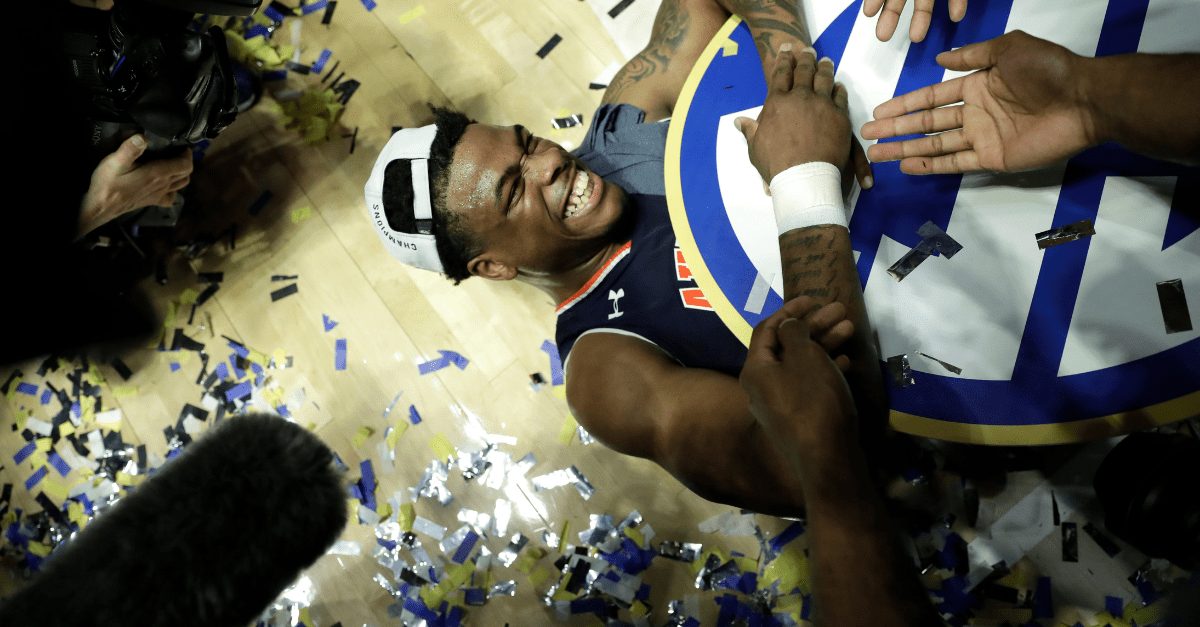 Not with the NCAA Tournament up next.

“We still have a lot more to prove, a lot more to accomplish as a team,” said Brown, a senior guard who hadn’t won an SEC Tournament game before this week.

We came. We saw. We conquered.

No. 22 Auburn (26-9) hadn’t even played for the title since 2000, and the fifth-seeded Tigers won their fourth game in as many days to capture only the second SEC Tournament championship in program history. The Tigers now have won eight straight and 10 of their last 11 heading into the NCAA Tournament.

Better yet, Auburn and coach Bruce Pearl have become the nemesis to his old program, beating Tennessee three straight times. Auburn ruined Tennessee’s hopes of winning back-to-back SEC regular-season titles for the first time with an 84-80 win to wrap up the season a week ago, and the Tigers also are the last team to beat Tennessee in Knoxville.

Now Pearl has his first SEC Tournament title at the expense of the first team he coached in the league.

“I get no greater pleasure in beating Tennessee for this SEC championship because I spent so many wonderful years as a Tennessee Vol,” Pearl said. “Got great respect for their fans and program, their tradition in basketball.”

On the court, Pearl thanked SEC Commissioner Greg Sankey for forgiving him and letting him return to the league as a coach. Pearl was still under an NCAA show cause penalty when Auburn hired him in 2014 for violations committed when he was at Tennessee. He was fired in 2011 for lying to NCAA investigators about a cookout he held for recruits.

“I hope the SEC’s better with me in it,” Pearl said.

Auburn family is repping at Toomers Corner waiting on the basketball team to get here. Great weekend to be an Auburn Tiger!! #WarEagle pic.twitter.com/XrffriaBsh

Tennessee (29-5) likely cost itself any chance at the program’s first-ever No. 1 seed in the NCAA Tournament. The Vols will have to win their first-round game to reach 30 victories for only the second time in school history.

“Now it’s time to play for the big one,” Tennessee senior Admiral Schofield said after being held to a season-low four points.

Lamonte’ Turner led Tennessee with 24 points. Grant Williams, the two-time SEC player of the year, was held to 13. Jordan Bone had 11 and Jordan Bowden scored 10.

Tennessee struggled to bounce back after an emotional win over No. 4 Kentucky in the semifinals. Coach Rick Barnes said he told his assistants the Vols looked a little drained at the start.

“We just came out with no energy,” Williams said. “We came out like we expected things to happen. It’s hard to bounce back from that, especially how Auburn plays, how explosive they can be, especially when they start making shots.”

The Tigers also became only the third team this season to lead Tennessee by double digits. Tennessee led 17-13 with 11:09 left on a pull-up jumper by Jordan Bowden. Then the Vols went cold, making only two buckets the rest of the half.

Auburn heated up with the Tigers’ defense helping them turn the Vols over and over. The Tigers scored 16 straight points in a run that featured a pair of 3s from Brown. A free throw by Horace Spencer capped the spurt with 3:58 left and a 31-18 advantage. Auburn led 32-23 at halftime.

The team that just set the SEC record for 3s made in a season hit 6 of 12 outside the arc to push that lead further. By the time Austin Wiley finished off a three-point play with 11:22 to go, the Tigers led 56-34.

Auburn: The Tigers get so much attention for how they shoot 3s, but they also are fifth in the nation in steals per game. They came up with 14 steals in forcing 17 turnovers and had a 21-11 scoring edge off turnovers. … The Tigers also got the most minutes yet from Wiley, coming off an injured lower right leg. He missed five games, including the Tigers’ tournament-opening win over Missouri.

Tennessee: The Vols had not lost a rematch in the regular season, going 5-0 in such games in each of the past two seasons. This game came a week after the Vols lost at Auburn. The Vols’ drought without a SEC tourney title, last won in 1979, will stretch to at least 41 years.

Brown had struggled in the first half of games at this tournament and said after Auburn’s win over Florida in the semifinals that he knew he would have to start faster in the championship game. The senior guard did just that. He was 4-of-8 shooting with 11 points, and Auburn needed his production with Harper limited to two minutes in the first half because of foul trouble.

“The fact is we weren’t very good,” Barnes said.

Auburn is cruising into its second straight NCAA Tournament.