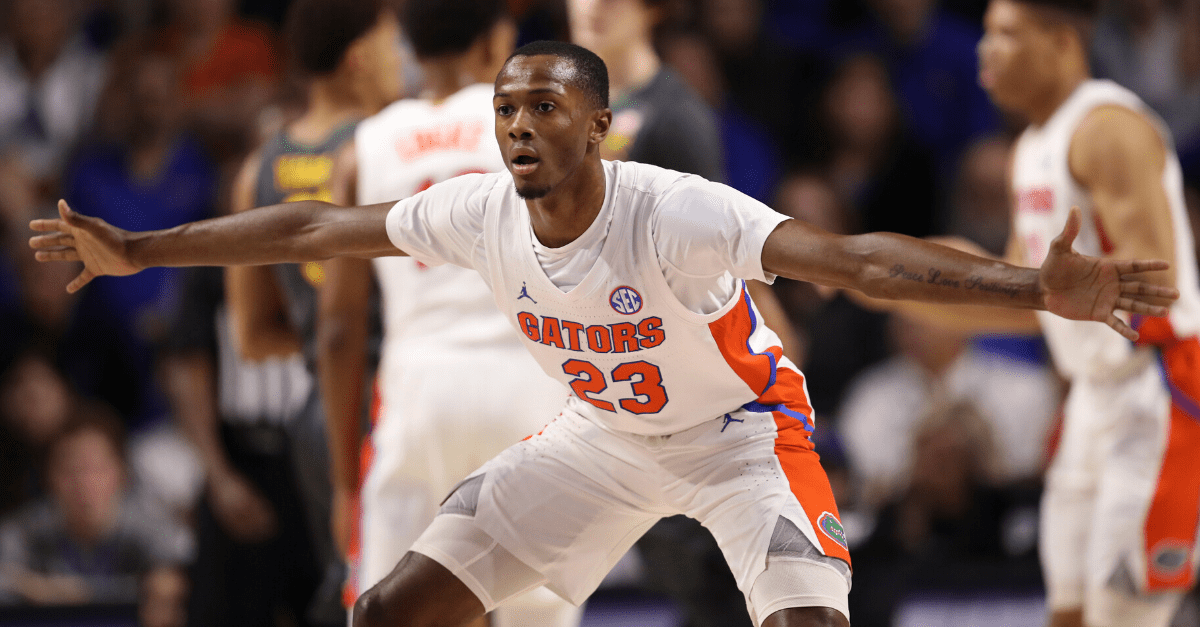 White found himself repeating a bunch of it at halftime against Georgia.

Keyontae Johnson, Andrew Nembhard and Tre Mann carried the Gators to one of the biggest comebacks in school history, rallying the Gators from 22 points down and stunning the rival Bulldogs 81-75 on Wednesday night.

The Gators trailed 52-30 early in the second half before putting together a 34-5 run that will go down in team lore. White ripped into his guys at halftime and then benched three starters following a lackluster start to the final 20 minutes.

?We?re just playing soft,” Johnson said. “He asked us, ?Are we scared? Why y?all come here if you?re not trying to play on the big stage?? I took it personal.?

So did his teammates. Florida (14-8, 6-3 Southeastern Conference) came alive during a 23-2 spurt fueled by Johnson and Mann. Johnson scored 11 during that stretch, and Mann added eight. They drained 3-pointers, drove to the basket and made Georgia (12-10, 2-7) look ordinary for the first time all night.

The Gators pulled ahead 69-59 with about six minutes to play, a staggering turnaround in a game that looked like it had been decided by the break. Georgia got back in it, though, whittling the lead to 73-71 with 2:55 to play.

Nembhard delivered the knockout blows: a driving layup that put the Gators up four with 58 seconds remaining and later added a steal and layup. Nembhard tied his career high with 25 points on 10 of 16 shooting, including scoring 14 of the team’s final 17 points. Johnson ended with 15, while Mann had 11.

?We’ve got to stop playing the way we’ve been playing, so lazy and casual,? Nembhard said. ?It starts with me. I’ve got to lead better.?

Although White said he was surprised to see his team dig such a huge hole, no one should be shocked to see Florida play this way at this point in the season. After all, the Gators have blown double-digit leads all season and even pulled off something similar last month. They trailed Alabama by 21 in Gainesville in early January before mounting a comeback.

This one matched the largest in school history. Florida also trailed by 22 against South Carolina in 1993.

?We’ve got to stop this from becoming a trend,? Nembhard said.

Freshman sensation Anthony Edwards scored 32 points in another dominant performance for Georgia, but he went scoreless for a 13-minute stretch while Florida was making its huge run.

Georgia shot 55% in the first half and looked like it would coast after taking a 15-point lead into the locker room. But the Bulldogs failed to halt Florida’s comeback.

?It was more the defensive (end), not handling their attack game the way that we needed to,? Georgia coach Tom Crean said.

Georgia: The schedule should ease up a little for the Bulldogs, who opened SEC play by playing Kentucky (twice), Auburn, Tennessee and Mississippi State. But this one will sting for a while – at least until Florida plays at Georgia in early March.

Florida: The Gators didn’t squander a big lead for the first time in weeks. They blew eight-point leads against LSU and Baylor and a 16-point advantage against Mississippi State. They led by 18 at Vanderbilt on Saturday before the Commodores whittled it to five in the final minute.

Georgia: Hosts Alabama on Saturday. The Bulldogs have won five of the last seven meetings.

Florida: Plays at Ole Miss on Saturday. Gators coach Mike White played collegiately for the Rebels and is 4-1 against his alma mater, including a 71-55 victory last month.