The 2022 NCAA Tournament has delivered in every way imaginable through the first two rounds, and there is still plenty of basketball to be played. Yes, some teams have managed to secure victories in blowout fashion, but there are many teams who have been locked in close games with their opponents, which has resulted in exhilarating back-and-forth contests.

One of the main topics of discussion this week has been the large number of lower seeds who bested the higher seeds in the Round of 64 and/or Round of 32 (not including a No. 9 seed over a No. 8 seed, like Creighton over San Diego State, or a No. 5 seed over a No. 4 seed, like Houston over Illinois). March Madness is all about unexpected upsets, so best believe that when the underdogs come out victorious, fans find themselves cheering on those squads as the tournament progresses. So, let's take some time to examine the eight upset makers in this year's NCAA Tournament. 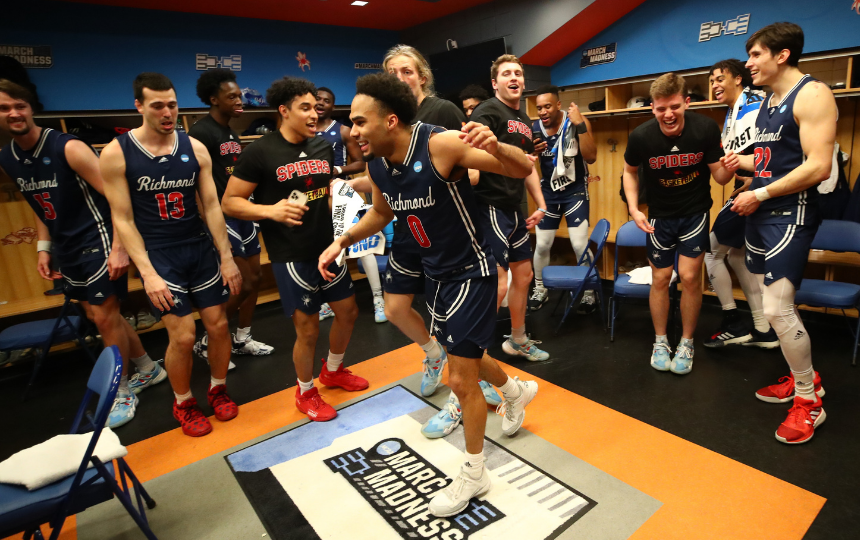 Richmond came into their Round of 64 contest against Iowa with a great deal of confidence, and their play on the court reflected that from the get-go. More importantly, head coach Chris Mooney concocted a game plan that would make it difficult for Iowa's best three-point shooters to get into a rhythm from deep, and I would say that Mooney's game plan worked perfectly.

I guess the Big Ten Tournament champions discovered that long-range jumpers tend to be short when there is always a hand in the face of the perimeter shooters. Offensively, the Spiders emphasized getting into the paint and exploiting the 5th-seeded Hawkeyes' nonexistent rim protection. This tactic proved to be successful for the Spiders in the contest, as they reached the free throw line 16 times and only attempted 17 triples in their 67-63 win over the Hawkeyes. Jacob Gilyard led the way for Richmond with 24 points while Tyler Burton and Nathan Cayo combined for 33 points (Burton - 18, Cayo - 15).

Unfortunately, Richmond wasn't able to adequately defend the three or muster enough offense against Providence in the Round of 32, as the Spiders surrendered 12 triples, shot 39.6 percent from the field and fell to the 4th-seeded Friars 79-51. 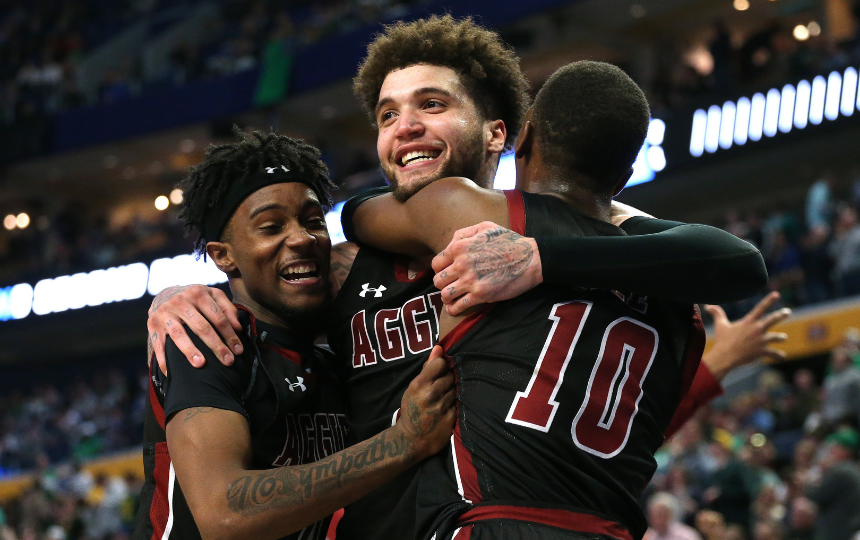 The 12th-seeded New Mexico State Aggies opened this year's NCAA Tournament by defeating the 5th-seeded UConn Huskies 70-63 in the Round of 64. Now, I would love to say that New Mexico State's first-round win was a collective effort, but to be completely honest, Teddy Allen was a one-man wrecking crew against the Huskies. Allen, who scored 30+ points four times in the regular season, put the Aggies on his back and went off for 37 points on 10-24 shooting from the field. While he stepped back and drilled a few timely threes in the ballgame, he seemed to thrive when he picked apart the Huskies' defense and made positive plays in the lane. He finished 13-13 from the foul line and only committed two turnovers in 39 minutes of action.

In the Round of 32, the Aggies ran into an opponent who had clearly prepared for Allen's offensive attack, which didn't bode well for Allen and the Aggies when the game got underway. Eric Musselman and the 4th-seeded Arkansas Razorbacks threw two defenders at Allen when he was in control of the ball, which made it virtually impossible for the WAC Player of the Year to find his groove offensively. The Aggies' hard-nosed defense kept them in the contest, but they weren't able to overcome Allen's offensive struggles (12 points on 5-16 shooting). In the end, their second-worst offensive outing of the season resulted in a 53-48 loss.

After squeaking past USC in the first round, Miami knew it they had to get off to a fast start against Auburn if it didn't want their season to end prematurely. Wisely, the 10th-seeded Hurricanes jumped out to an early 13-4 lead and never surrendered the lead to the 2nd-seeded Tigers in the contest. How did Miami go about slowing down Jabari Smith you ask? Well, the Hurricanes forced the future lottery pick to put the ball on the deck on the perimeter and turn/spin into help defenders when he tried to go to work down low.

The freshman star wound up with just 10 points on 3-16 shooting and was never able to impose his will offensively. Additionally, I had a feeling that the team that won the guard battle would be in a good mood when the final buzzer sounded, and I think that everyone would agree that the Hurricanes' guards outplayed the Tigers' guards from start to finish. Isaiah Wong led all scorers with 21 points, but all of Miami's guards had something to do with the Hurricanes' convincing 79-61 victory over the Tigers. Miami will move on to face off against the 11th seeded Iowa State Cyclones in the Sweet 16.

North Carolina cruised to a 95-63 win over Marquette in the Round of 64 and appeared to be on their way to another beatdown in the Round of 32. However, everything changed for the 8th-seeded Tar Heels after Brady Manek got ejected from the game in the second half and the Baylor Bears began to turn up the heat defensively. Essentially, the Tar Heels' 25-point lead quickly evaporated thanks to several turnovers and some questionable officiating, which led to a furious Baylor comeback in regulation to send the game to overtime.

Although it seemed like all the momentum was in the Bears' favor in overtime, the Tar Heels turned out to be the aggressors during the five-minute overtime period. Dontrez Styles drilled a massive corner three, Armando Bacot converted multiple free throws at the foul line, and R.J. Davis, who had been carving up Baylor's ball screen defense the entire game, weaved his way into the paint and finished a difficult layup as he was getting hacked at the basket. At the end of the day, the Tar Heels came out with a 93-86 victory and eliminated the No. 1 seed in the East Region. Davis finished the game with an astounding 30 points while Brady Manek notched 26 points before having to exit the contest. The Tar Heels will have to take down the 4th seeded UCLA Bruins in the next round if they wish to keep their national title aspirations alive. 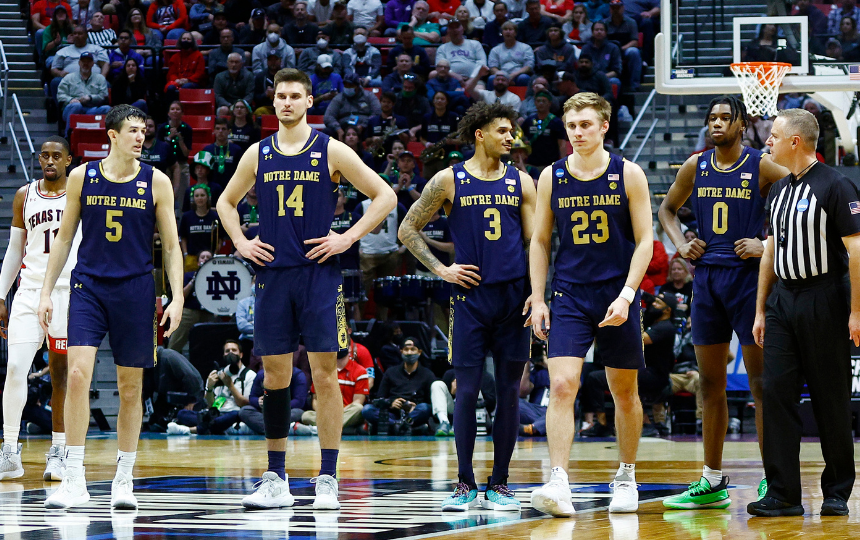 It took Notre Dame two overtime periods to outlast Rutgers in the First Four and advance to the Round of 64, which I wholeheartedly believed would affect their ability to hang with Alabama in their next contest two days later. To my surprise, the 11th seeded Fighting Irish came out and demonstrated that fatigue wasn't going to be an issue in their second NCAA Tournament game, especially for Cormac Ryan. The junior guard notched 29 points on 10-13 shooting and got himself going from beyond the arc.

Whether it was off the dribble or the direct result of a teammate's paint touch, Ryan was determined to lead the charge for the Fighting Irish offensively and give them a spark from long-range. Yes, the 6th seeded Crimson Tide did lose their best playmaker three minutes into the game (Jahvon Quinerly), but their 78-64 loss had more to do with them allowing one player to net seven of his team's ten threes. Against one of the best defensive teams in the country in the Round of 32, points were extremely hard to come by for Ryan and the Fighting Irish. As I expected, the 3rd seeded Texas Tech Red Raiders made life miserable for Notre Dame and turned the contest into an absolute dogfight. The Fighting Irish were still in striking distance down the stretch, but a couple of costly turnovers sealed their fate and helped the Red Raiders escape with a 59-53 win.

Just when it looked LSU was going to avoid a first-round upset against Iowa State, the 11th-seeded Cyclones called on Tyrese Hunter to close out the Tigers, and the freshman guard performed fearlessly in crunch time. His two long threes late in the contest destroyed any hope that the Tigers had of overcoming their 11-point second half deficit (they ended up falling to Iowa State 64-59). Against Wisconsin in the Round of 32, the Cyclones were tasked with shutting down the Big Ten's third leading scorer, Johnny Davis.

While the superstar guard managed to come close to his season average (19.7 points per game, 17 points against Wisconsin), he shot 25 percent from the field and couldn't create many open looks for himself throughout the game. Tyrese Hunter couldn't repeat his offensive brilliance against the 3rd-seeded Badgers, but Gabe Kalscheur stepped up in a huge way and carried the Cyclones on that end of the floor. He finished with 22 points on 10-19 shooting from the field and was the Cyclones' go-to scorer in the contest. Once Wisconsin lost their floor general (Chucky Hepburn) late in the first half, it seemed as though the Badgers had a hard time getting organized offensively, which the Cyclones took advantage of immediately. Overall, credit T. J. Otzelberger's club for being five points better than the Badgers in the Round of 32 (54-49) and giving Iowa State fans multiple reasons to be excited about the future after last year's disastrous two-win campaign. The 10th seeded Miami Hurricanes will meet the Cyclones in the Sweet 16. 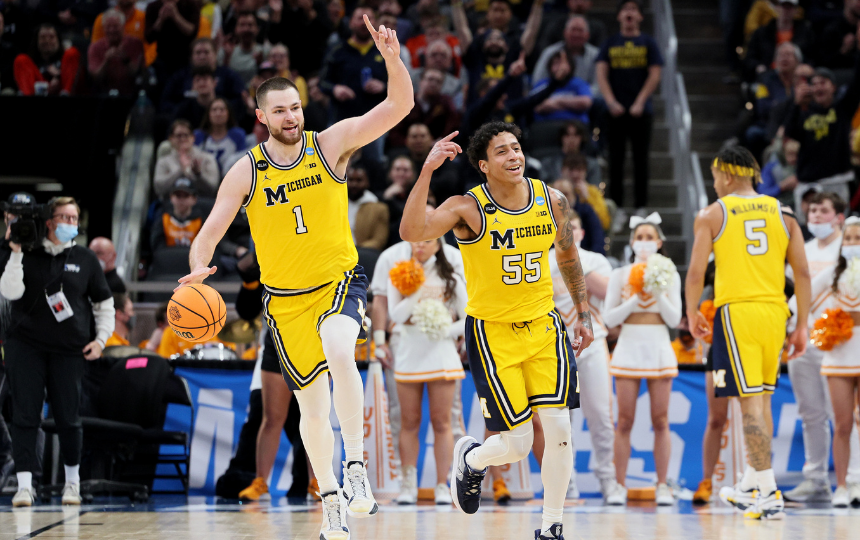 Some individuals think that Michigan should have been one of the top seeds in the NIT, but Juwan Howard's club has performed like a team that deserved to hear their name called on Selection Sunday. Colorado State delivered an early blow to Michigan in the Round of 64, but the Wolverines fought their way back into the game by playing their brand of basketball for the remainder of the contest. Once they started feeding Hunter Dickinson down low and giving him opportunities to make decisions on either block, they realized that the Rams had no answer for him whatsoever.

Combine that with the fact that their starting guards found ways to score when they weren't being occupied, and you have a team that earned a 75-63 win in the opening round of the NCAA Tournament. In round No. 2 against the 3rd seeded Tennessee Volunteers, the Wolverines received outstanding offensive contributions from Dickinson and Eli Brooks. Dickinson, who put up 21 points against Colorado State, dominated the Volunteers inside and even drilled a few triples during his marvelous 27-point performance. Brooks scored 23 points and converted big shot after big shot after notching 16 points against the 6th seeded Colorado State Rams to kick off the Big Dance. Individuals can continue to scrutinize the Division I Men's basketball committee for putting Michigan in the field all they want, but they'll have to live with the fact that the Wolverines will play the 2nd seeded Villanova Wildcats in the Regional Semifinal.

There's more Saint Peter's in this article, but I will still take the time to mention them briefly in this piece. Let me put it like this, 95.6 percent of the ESPN Tournament Challenge brackets had Kentucky winning their opening round game, meaning most people believed that the Peacocks would be one and done in the NCAA Tournament. Even when the game was tied at halftime, I got the sense that a good portion of the college basketball world was positive that the Wildcats would pull away from the Peacocks in the second half.

Kentucky was able to build a six-point lead with a little over four minutes to play in the contest, but Saint Peter's refused to go away when all signs were pointing toward a crushing first-round defeat. After forcing overtime and taking a 77-76 lead in the extra period, the Peacocks proceeded to finish the game on an 8-3 run and become the 10th No. 15 seed to knock off a No. 2 seed in the NCAA Tournament. The Peacocks returned to action two days later and defeated the 7th-seeded Murray State Racers in another tight contest (70-60). Many people didn't predict that this would happen, but the Peacocks made it past the first week of the Big Dance and will be competing in the Sweet 16 against the 3rd-seeded Purdue Boilermakers.