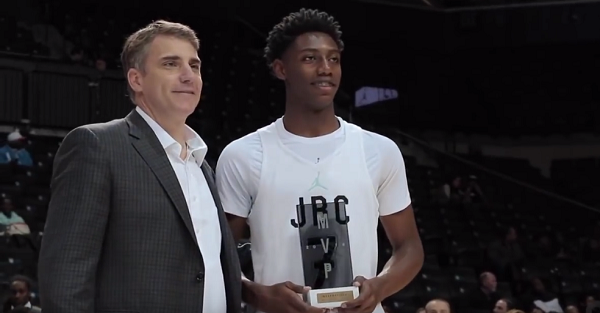 R.J. Barrett has his pick of schools should no matter what class he ends up in as he’s trying to decide between staying in the 2019 class or moving up to the 2018 class. However, Adam Zagoria of ZAGSBLOG is reporting that Barrett has four favorites right now:

RJ Barrett can go literally wherever he wants but Duke, Kansas, Kentucky, Arizona are among leaders, per sources. pic.twitter.com/MduEhx113e

The 6’7″, 185-pound forward out of Canada just helped his FIBA U19 team upset Team USA coached by Kentucky head man John Calipari, who is also trying to land Barrett. Along with UK in his top four are Kansas, Arizona and Duke as described by Zagoria. Barrett had 38 points, 13 rebounds and five assists in the upset win and will likely put up similar numbers against other high schoolers for at least one more year.

ESPN has Barrett as the top ranked recruit in 2019 and he also holds offers from Oregon, Oklahoma, Baylor, USC and UCLA for now.