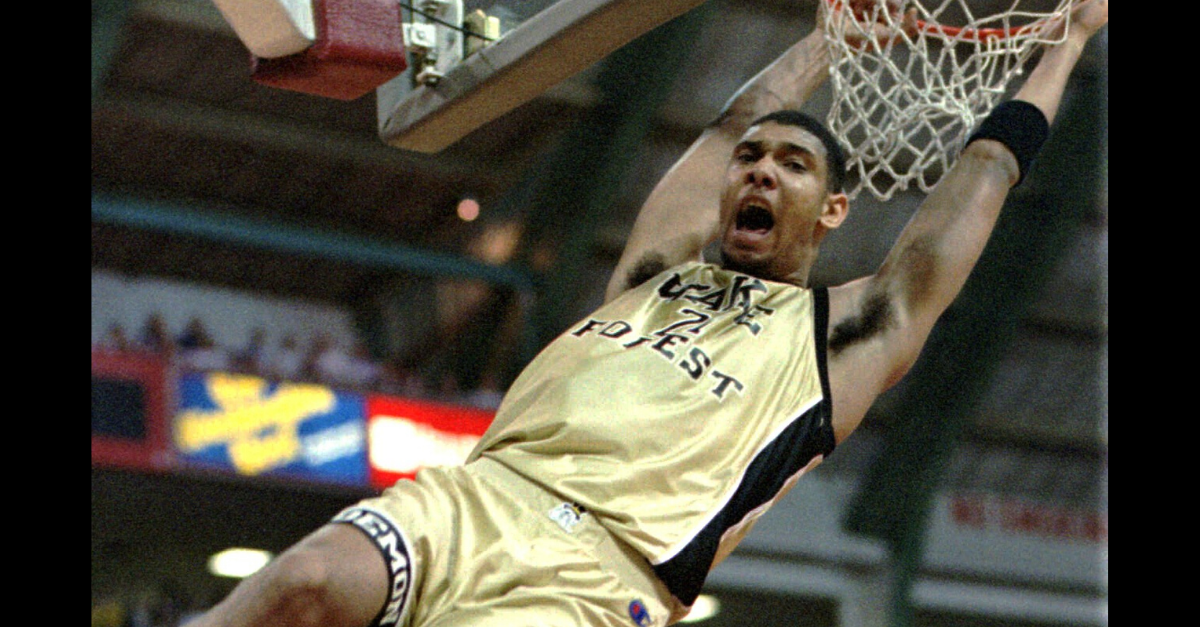 Tim Duncan might be underrated. That’s weird to say for a five-time NBA Champion and 15-time All-Star. The Big Fundamental was vanilla compared to peers Kobe Bryant, Shaquille O’Neal, and Kevin Garnett. Yet, he dominated on the court and the backboard was his best friend.

Tucked behind an outstanding NBA career with the San Antonio Spurs, the future Hall of Famer’s tenure as a Wake Forest Demon Deacon is just as incredible.

Here’s what Duncan achieved in college:

Born in St. Croix, U.S. Virgin Islands, Duncan was naturally a swimmer growing up. After Hurricane Hugo destroyed the Olympic-sized pool on the island, Duncan took up basketball. He overcame the learning curve and gained interest from Wake Forest University men’s basketball coach Dave Odom. The power forward took off for Winston-Salem and joined guard Randolph Childress, one of the best players in the ACC. Childress is most known for his 1995 ACC Tournament performance. Over the course of three games against Duke, Virginia, and North Carolina, Childress averaged 35.7 points on the way to the ACC title.

Wake Forest made the NCAA Tournament every year of Duncan’s college career. Their best run was during Duncan’s junior year when they reached the Elite 8 but fell to Kentucky. Personally, Duncan continued to improve each year and was undoubtedly the best player in college basketball by the time he left Wake Forest.

If Duncan came around today, he would be an anomaly. He played all four years; first, to mature and grow his game, and second, to fulfill the promise to his late mother of obtaining a college degree.

This Tim Duncan story after a Wake Forest loss to Alaska-Anchorage is extremely Tim Duncan.

And he ended up winning 97 games in four seasons so he was right. pic.twitter.com/qot6RAUW5r

RELATED: Was Larry Bird the Most Dominant College Player Ever?

Nowadays, it’s all about potential. Duncan was fully-ready for grown man basketball by the time he was the No. 1 overall pick in the 1997 NBA Draft. He averaged 21.1 points per game and 11.9 rebounds out of the gate, walking away with the NBA Rookie of the Year Award in 1998. The next year, the Spurs beat the New York Knicks to capture their first title in franchise history.

Five NBA Championships, three NBA Finals MVPs, and 10 All-NBA First Teams over 19 years, Duncan is one of the most accomplished players in NBA history. The decorations don’t stop with retirement. A Naismith Memorial Basketball Hall of Fame induction is coming in August that will cement him as one of the greatest basketball players ever.

These days, Duncan is doing what he does best: staying out of the spotlight. He serves as an assistant coach under longtime Spurs head man Greg Popovich. Players can count on blank stares and a billion individual texts intended for the team group chat when Coach Duncan responds on his flip phone.

MORE: Shaq?s Kids: Where Are the 6 O?Neal Children Today?