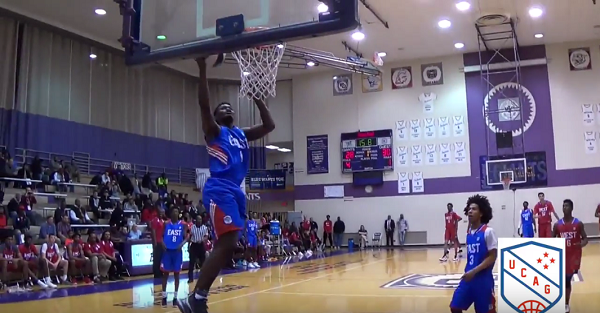 Zion Williamson is the No. 3 ranked recruit for the class of 2018 in the country according to ESPN. The top ranked small forward in the class has been playing hard on the summer circuit and so have some schools going after him.

The 6’7″, 230-pound averaged 16.3 and nine rebounds on the adidas circuit this summer and posted a player efficiency rating of 27.0. The South Carolina native has the Gamecocks on his list of teams working hard for him along with Arizona, North Carolina, Clemson, Oregon and NC State.

“I feel like Arizona, Oregon, North Carolina, South Carolina, Clemson and NC State,” Williamson told Evan Daniels of Scout.com in terms of schools recruiting him hard. “I feel like those schools are telling me I’m the man.”

He was most complimentary about Arizona and North Carolina though. He liked the Wildcats because of guys they recruited like Aaron Gordon and Stanley Johnson who have somewhat similar builds to Williamson. He said he liked the Tar Heels for the family feel. He also told Scout where he plans on taking his visits.

“I plan on taking visits to Clemson, South Carolina, NC State, North Carolina during football season because they are around,” he said. “I’m going to try and take one to Arizona and Oregon maybe during basketball season so I can watch their team.”

Williamson’s dad played at Clemson so don’t be surprised if the Tigers make a good push during the recruitment process.