The current state of sneaker culture, like many other collecting hobbies, is driven by exclusivity. The fewer pairs made, the higher the hype. Week after week, people all over the world flood stores and apps to try to pick up the latest limited edition, only to be met more often than not with the dreaded L on every release date. But even the luckiest, (or bott-iest) of sneakerheads can really only dream of the upper echelon of limited releases, the Player Exclusive.

What is a Player Exclusive? 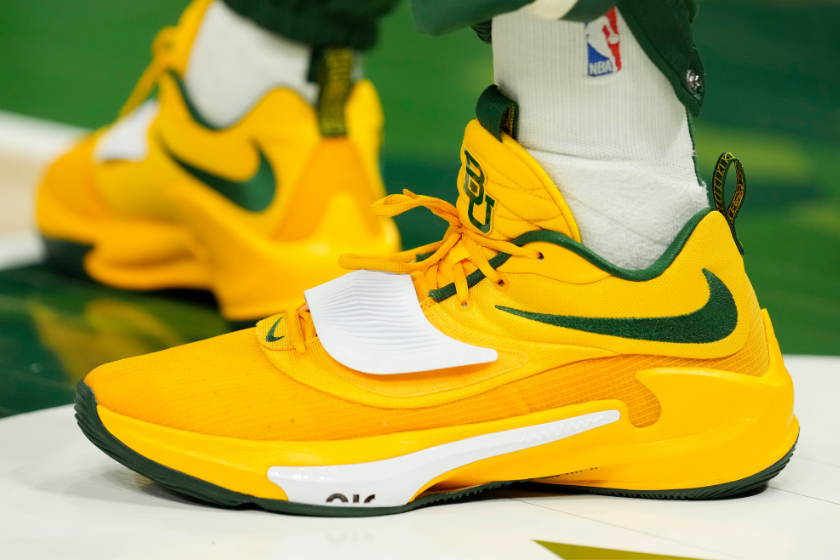 At its simplest, a Player Exclusive (or PE for short) is exactly what it sounds like: an exclusive colorway of any given model of shoe that is exclusive to a particular NBA player or players. Typically, these are colorways designed to match the team colors of the player who the PE is for, like the Air Jordan 1 Chicago colorway. Sometimes, PEs are also adorned with a player's personal logo, like every shoe in the Curry line. Not all PEs are created equal though.

When most people are talking about PEs they are referring only to colorways that exist on already popular shoes. Therefore, almost all PEs worth noting are variations of Signature shoes. Very rarely, if ever, does a "team shoe" PE become coveted. There are a few exceptions, but no one is really clamoring to own their own pair of Nike HyperDunks with Draymond Green's personal logo on them. Sorry, Dray. Unique colorways of retro Air Jordans will always top "best PE" lists. Always. 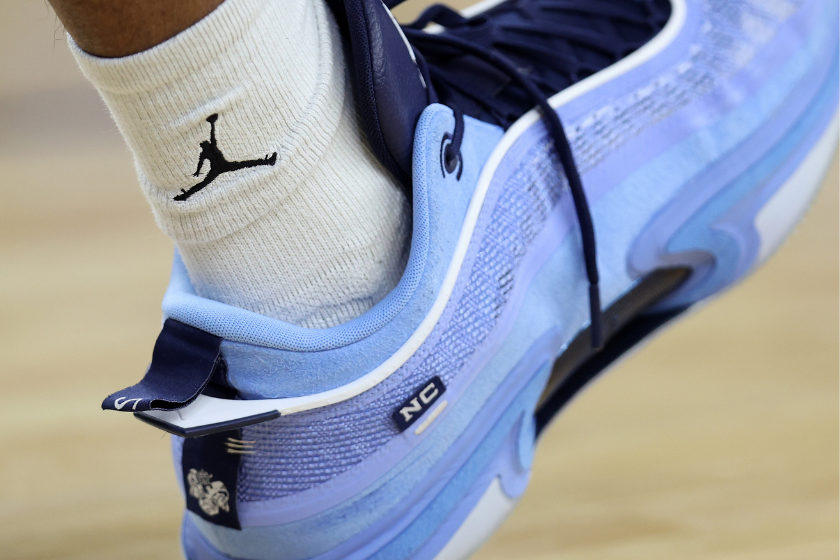 Some of the most sought-after PE shoes aren't even technically player exclusives but rather school-specific colorways. Adidas has made shoes for Indiana, Miami and Louisville, offering their line of Donovan Mitchell, James Harden, Dame Lillard and other models to schools. To the surprise of no one, Adidas has also had difficulty getting schools into the new Yeezy basketball performance shoes.

New Balance hasn't quite figured out how to market their line of Kawhi Leonard's shoes to schools, only adding Boston College to their roster in recent years. Under Armour works with Maryland, Auburn and South Carolina, giving them access to Stephen Curry's line as well as Joel Embiid's kicks. Converse had its heyday up until Michael stepped on the court, supplying the only athletic shoe specifically designed for basketball around. But since the Air Jordan revolution, Converse hasn't been able to gain its footing since. But that's okay, considering that Nike bought the former Kings of Sole in 2003 for $315 million. If you can't beat 'em get bought by 'em.

Nike hands out apparel and footwear to Arizona, USC, Duke, UConn and Oklahoma State, sending the latest Kyries, Russell Westbrooks and Nike LeBrons to their door. Paige Bueckers, who has a similar play style to Kyrie, has rocked his signature show while playing at UConn. Duke's relationship is something you should already know about considering Zion Williamson ripped through a pair of Paul George's signature shoes during his tenure as a Blue Devil. Zion wouldn't have ripped through a pair of LeBron James shoes, I can tell you that.

*these colorways are exclusive and will not go to retail pic.twitter.com/Jjk3c9r9ye

Notice each pair of shoes in that photo has the University logo on the tongue, as well as the school colors. That's a tell-tale sign of a school PE and something that elevates a pair over a similarly themed colorway. Take for example the "UNC" Jordan 3. By virtue of Michael Jordan attending the University of North Carolina, many Jordan retros are released these days in "UNC" themed colorways. Typically adorned with "Carolina blue", these retros tend to resell for a bit higher than average retros, but nothing out of the ordinary. In the case of the Jordan 3 UNC that came out in 2020, the pair is predominately white with Carolina blue hits near the elephant print, as well as on the Jumpman logos. Pairs are currently selling on sites like StockX for around $450.

Contrast that with the Jordan 3 UNC PE from 2018 that is the exact same colorway, except this time there's the North Carolina logo on the tongue instead of the Jumpman logo. These pairs have an average sale price of $4000 these days. Is that changed logo really worth nearly 10x as much money? I don't think anyone would argue that's the driving factor in the price. But since the PE sneakers were never sold in stores and were only made available originally to students and staff involved with the school's athletic teams, the scarcity of the model throws the price thru the roof. Likewise, many believe the demand for PEs such as that Jordan 3 is what drives the Brand to later release very similar colorways in a much wider release.

There is no school that gets more PEs consistently than the University of Oregon. By virtue of being located a stone's throw from Nike headquarters in Beaverton, (and because the co-founder of Nike is an alum), UO gets all manner of PEs. There are even some collectors who focus solely on Ducks colorways. P.J. Tucker has made himself a cottage industry of playing in the most coveted shoes in the game and when he wore an Oregon Ducks F&F PE Jordan 13 in warmups of last year's NBA Finals. Sneaker Twitter nearly exploded. 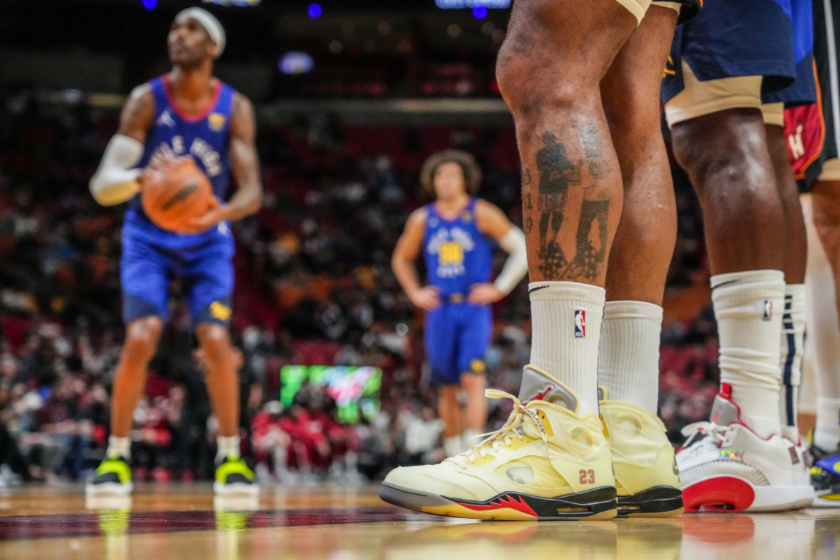 P.J. is the perfect segue into specific player PEs. While Tucker is known for playing in the most hyped of hype kicks in games and warmups, more often than not he is playing in someone else's PE. Up until the 2019 season, the NBA had a rule on the books that mandated every player's shoes to predominately match the colors of their uniform. (This is how we get the largely false "Banned" Air Jordan 1 story, but that is for another time) And since there are only a limited number of sneakers out there that are suitable for basketball on a professional level, and an even more limited number of players signed to signature shoe deals, the PE was born.

Some of the highest-rated PEs come courtesy of Ray Allen. Allen was one of the original members of "Team Jordan" -- Jordan Brand's first signings. While most Jordan athletes would end up playing in "Team Jorda" shoes, Allen was known for wearing the same model "His Airness" wore in his time on the court. Allen also wound up being the "face" of the continuing Air Jordan signature line, even after MJ had retired for good. In part because of their rarity, in part, because Jordans look so damn good in Seattle Sonics colors, and in part because of the career Ray Allen had, most Allen PEs fetch five-digit prices on the secondary market. (Because no one wants Air Jordan 22's, even if they're PEs).

These days players will play in all sorts of PEs. I have seen no fewer than 10 different variations of the Nike Kobe 6 Protro on court this season, and not a single Kobe 6 Protro has been made available or you or me. Speaking of Kobe, when he retired he was gifted what may be the single greatest collection of Jordan PEs. Every single model (up to the point of his retirement) is done in Brilliant White with the Jordan 3 and Jordan VIII getting Purple and Gold accents. (Kobe played in those two models and those specific PEs are GORGEOUS), and an opposite set that was auctioned off for charity in all Black. That set went for $240,100, or roughly 8K a pair. Honestly, a bargain by today's standards.

A gift from The Boss to @KobeBryant before his last All-Star Game: https://t.co/uKIfOQDxFd. pic.twitter.com/zVW3GnfXmL

This is just the tip of the PE iceberg. Every year, sneakerheads tune into ESPN solely to see what's on their favorite player's feet and salivate over the prospect of one day owning a similar pair. Or maybe winning the lottery and buying a pair of Jeter 11s. Or maybe being handed a pair of Carhartt 4's which is like winning the lottery on its own. It's nice to dream.